Today is a day of uncertainty.

Just tried to wake my son up for school and there’s no school this week.

I have classes to teach, even though my students scattered out of town last week.

Somehow work will get done, creativity will triumph and I’m not sure how yet. 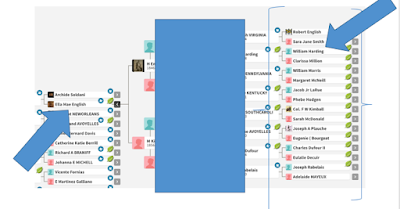 A quick peek at his tree shows his family moves westward to Kentucky where his daughter Nancy marries Robert English’s son Weeden. 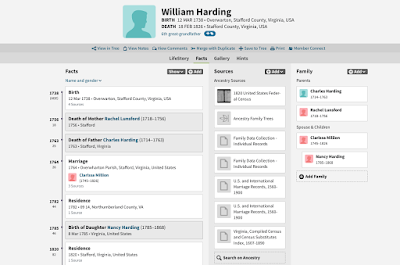 There is no overt evidence indicating he fought in the American Revolution, and a bit of me wonders if he might have been a Loyalist.

I keep looking in and around his tree and got a little lost for a bit, peeking at where  his eight great-grandparents on his father's side were born and died.

Great-great-grandfather John Wesley Hardin/Hardewin was born and died in Normandy.

Please notice his name -- I'm not sure it would be a coincidence to share a name with the theologian John Wesley who lived at the same time, but there is time to research it later. 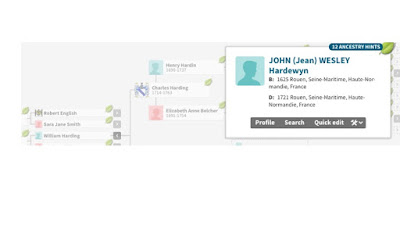 So I thought I would google John Wesley Hardin to see if he was somehow a famous historical person I hadn't learned about and found this. 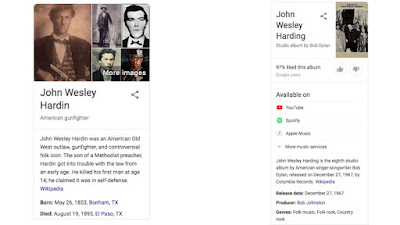 Moving on to great-great-grandmother Frances Marie Boyer, born in London and dies in colonial Virginia.

We don't see many facts jumping out about Frances' father, but I was able to easily trace her family back 8 generations on her mother's side through Knights and Ladies and etc. 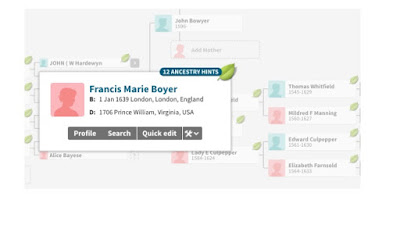 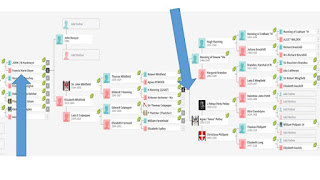 My guess is that the family might be merchants or traders; they could be Catholic or Jewish.

I can only find Marcus' parents' names and nothing beyond that generation.  I'm sure it's out there, waiting to be found at just the right time, but not today. 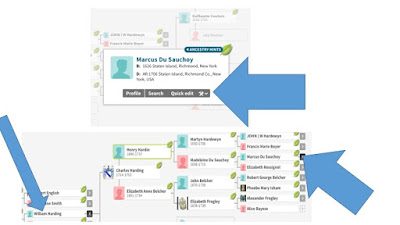 Great-great-grandparent #4 is Elizabeth Rossignol who was born in Leiden, Holland and died in New York around the time the British arrived.

I can only go back two generations in her family. 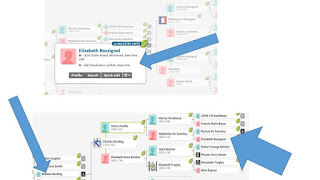 Elizabeth's two grandfathers (maternal and paternal) share her last name; hints indicate they were born and died in France. 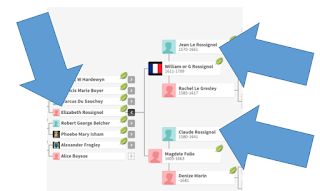 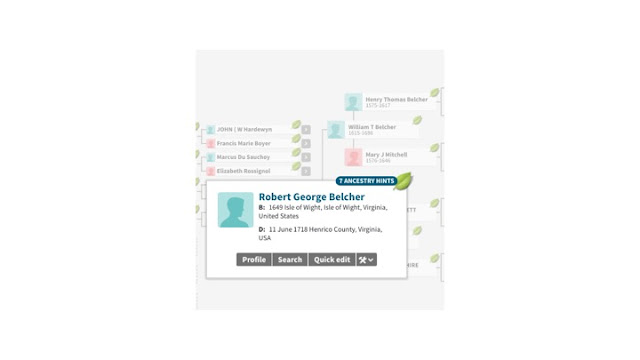 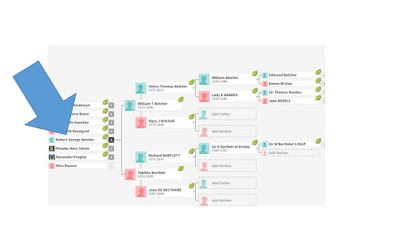 I was able to easily trace Belcher's very British family back for 4 generations, and am under the impression they were involved with the original joint-stock corporation that founded the Jamestown. 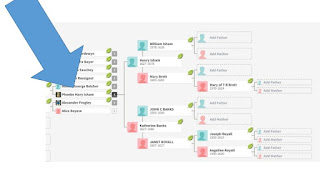 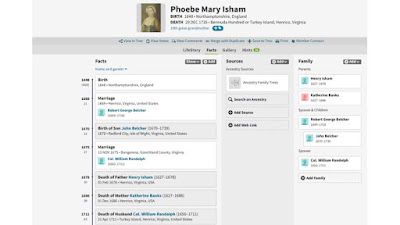 I knew Phoebe Isham was special when I found several portraits that were made during her lifetime.  This is not a normal thing; it involves money and connections and a home to hang the portraits. 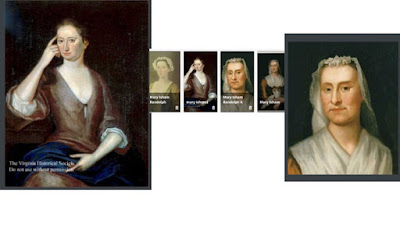 First of all, I am 100%Team Frogley and that is my new name and I am also changing the Wi-Fi in my house to "Frogley Manor."

I took a few hops and leaps through the Frogley family and found 8 generations in only a few minutes. 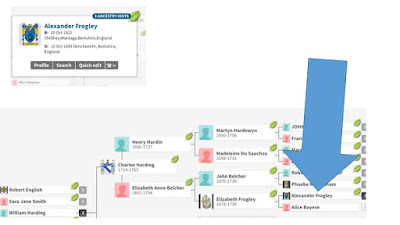 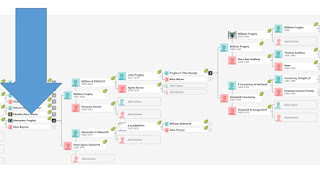 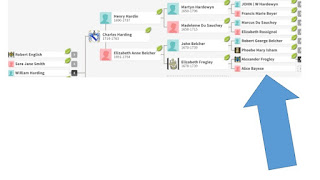 I know Alice must have had parents but they aren't low hanging fruit, and I have a rule to walk away if I don't find any new info after 15 minutes, and I walked away to keep searching for Patriots to give my dad for Father's Day. Assignment:Hire yourself to use your talents and skills to contribute to this community in a meaningful way.
A quick review of what students have done in the past should inspire you: http://www.melissalaughing.com/2017/09/service-project-proposals-and-final.html
Propose to do  your own project or sign up to help me with one of the projects/events posted at the bottom of this post.  This proposal is due on Canvas*

AMH 2020 only:  If you are doing 2 projects, you need 2 separate proposals submitted to the 2 different links in Canvas.
OPENING: Pick a quote from below (or use another one but it better be good!) to start your essay.
ESSAY: Write up a thoughtful PARAGRAPH explaining why you are hiring yourself for this job. Save as a word.doc or pdf and submit to the link on Canvas.
Start your proposal with one of these or offer your own:
I slept and dreamt that life was joy. I awoke and saw that life was service. I acted and behold, service was joy. - Rabindranath Tagore
The best way to find yourself is to lose yourself in the service of others.         -Mahatma Gandhi
What I am looking for is not out there, it is in me. -Helen Keller
We need more kindness, more compassion, more joy, more laughter. I definitely want to contribute to that. - Ellen DeGeneres
As you grow older, you will discover that you have two hands, one for helping yourself, the other for helping others.- Audrey Hepburn
I've learned that people will forget what you said, people will forget what you did, but people will never forget how you made them feel.- Maya Angelou
Intelligence plus character-that is the goal of true education.― Martin Luther King Jr
“You give but little when you give of your possessions.
It is when you give of yourself that you truly give.”
― Kahlil Gibran
“The wise man does not lay up his own treasures. The more he gives to others, the more he has for his own.”
― Lao Tzu
“Try not to become a person of success. Rather become a person of value.”
― Albert Einstein

Your Gifts Made a Difference

I learned a lot from last year's holiday party at Veterans Village.

I learned that it was not a good idea to hand out wrapped presents and hope they would all be somehow equal and pleasing.

I learned that what the Veterans really wanted  (towels, sheets, gift cards slippers, posh candy, pajamas and robes) wasn't quite in line with what good-hearted people gave me to give them. You don't even want me to make a list of shame here people, don't even.

This year I made a list of suggested donations and it worked out fantastically.

Volunteers dropped donations by and mailed them and sent them to me from their daughter to my daughter. I know a few of you out there weren't able to get your donation to me in time -- don't worry,  not a single Veteran left the event empty handed, please save it for the Spring Fling donation drive you didn't know you were going to help me with.


Here is an incomplete list of people who dropped donations by my office, compiled entirely from the sticky notes etc that I found on the gifts.

Here is a picture of donations that came via mail, daughters and etc. Soft blankets, special treats, gift cards to Publix, Walmart, Panera and Starbucks.

I'm not sure if she wants everyone to know, but one of my AXO sisters from Loyola sponsored 10 Veterans AND sent a donation to entirely cover two upcoming Thursday night dinners.

So today, the day of the event, I met one of my students in my office and we sorted and counted the donations.

We talked through how things could go that would be better than last year and decided to make 4 stations: 1) gift cards 2)  towels 3) sheet sets 4) a bonus item (slippers, posh chocolate, robes).

This helped us figure how to package and repackage the gifts and load them into our cars.

Once we got to Veterans Village we were joined by other TCC community volunteers and once we were all set up the goodies went so fast I seriously could not get more pictures than you see below.

I was so busy talking to the Veterans and moving them through the stations that I have no pictures of the lovely  dinner of comfort food and individual cheesecakes being served upstairs by two other TCC faculty.

There was a lot of laughing, a lot of hugging, and even a few men walking around proudly in lovely new robes and such.

Your gifts made a difference.

Thank you to all of you who helped in the past and a special thank you those of you who are plotting how you can help in 2017.

Part 2: The Bug.
He walks back into the room, half yelling, half laughing. It is impossible to tell what has happened, but I venture a guess.
Did you step on a bug? I guess this because the bug guy was just here yesterday and because also it’s rainy and cold outside so Florida bugs try to come inside and chillax. A bug in the laundry room would not be a complete surprise.
He nods speechlessly and I go look.
OMG. Yes, a bug, flattened it completely and absolutely clearly dead.
I announce my findings.
Zack howls again at the horror of all of this and then laughs and cringes and I cringe too and somehow it falls on me to clean the damn bug up.