Alfred Williams 1858 Will Part 2: That each female slave receive one half of one week day in every week for every two children she may bear, while in my service, during the life of such children.

Continued from https://www.melissalaughing.com/2020/12/alfred-williams-1858-will-part-1.html
Mr. Williams mentions enslaved people in the tenth part of his will and testament, after money and children and fighting with people in his head and solving problems that haven't happened.
I can only imagine how much fun he thought he was.
Here is exactly what it says, then we can unpack it.
Tenth. I direct special care be taken of all the slaves belonging to myself and children, as regards their health and comfort.  I direct you as far as possible that they receive moral culture and religious instruction.   That each female slave receive one half of one week day in every week for every two children she may bear, while in my service, during the life of such children. 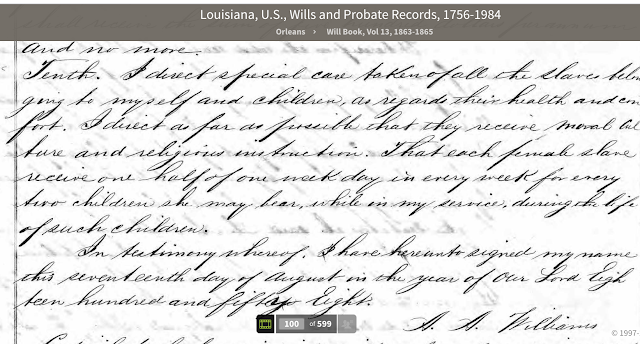 Any document that honors the right to own humans is fundamentally flawed.

This one is especially strange because of the offer of time off to female slaves for bearing children "while in my service."

Does "in my service" mean "having sex with me?" or "while I am forcibly enslaving them instead of someone else enslaving them when the child was born?"

It had to be well known that Mr. Williams gave women who bore children -- and whose kids survived -- more time off than everyone else, but I makes me wonder what kind of system that fueled.

The clause about the children being alive in order for this clause to kick in is menacing.

Why add that? Would you really take time off BACK from a grieving mother? I bet he would.

Did women (and the men they loved?) encourage each other to face nonconsensual sex in order to buy 100s of hours of freedom of the next years?

Were the enslaved women  jealous of each other? or protective?

What did older women tell their little sisters? Their daughters?

We may never hear their side of the story.

Mr. Williams benefits from laws and traditions that were obstacles to literacy for people of color because I think they left none of their stories in writing, but in all truth .

I have hours and hours to fill during this slippery time of questioning everything,  so I just might search the Library of Congress' Slave Narratives or Louisiana archives for answers that will lead to more questions and stories.

Just as it should be.