Alfred Williams 1858 Will Part 1: Because I am not looking for anything in particular, I notice more.

I have hours and hours each day to fill during this slippery time, and I can’t keep rearranging books or finding obscure Swedish shows on Netflix.

So I keep researching.   Sometimes I have a goal in mind, like with the Pandora’s Safe project.  Most of the time I don’t, and instead open digital databases and read file after file of raw data.

There is something so uncomposed about data that relaxes my mind. When you read a book it’s been edited and architected to take you somewhere in a fixed number of words and images.

It is a constructed ride and sometimes I need to have the feeling of taking a long walk in archives staring at documents like birdwatchers squint at trees.

On Monday night I read the death certificates of each and every person who died in one Alexander county of North Carolina between 1945 and 1950.  I didn’t take notes but I did bookmark interesting names and shout out things like “this poor guy --- the saw mill” to my kids who are experts at both ignoring me and appearing  to be encouragingly supportive.

What I found didn’t surprise me. Most deaths were disease related, and the only gunshot deaths were suicides by men in their 60s and a toddler shot by her 6 year old brother. 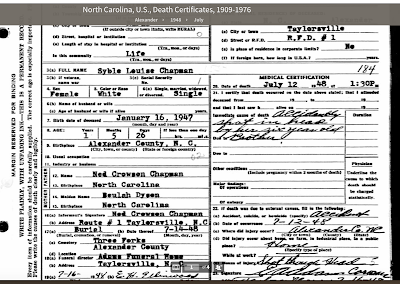 I was not pleased with seeing a 24 year old woman die of natural causes and bookmarked the page to research it later. 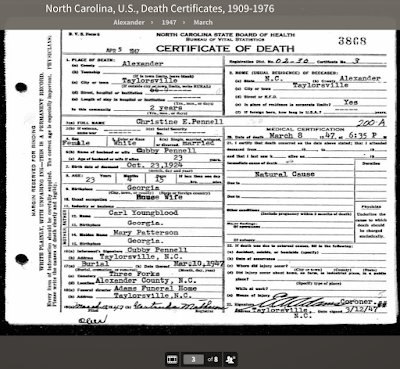 There is something quietly soothing in reading every record then moving to the next file.

Because I am not looking for anything in particular, I notice more. 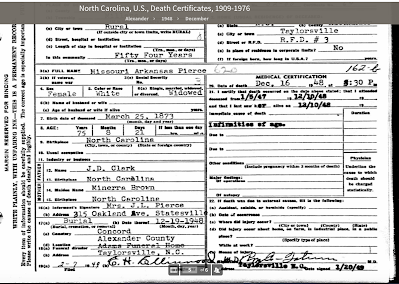 I always want to know who was the informant at the death, and where the body went after the funeral.  Every now and then I pull up an obituary or look for a newspaper article but most of the time I just keep reading the primary sources as they were written and filed.

One of my favorite things to do is read Wills (and yes, my brother told me to get a new hobby but also have you tried reading Wills?), especially those written and/or probated before the 13th Amendment’s abolition of slavery.

When Wills are filed for Probate they are usually copied into the counties book of wills, which means that all the wills of everyone who died in a certain year can literally be read like a book from cover to cover if you are good at reading cursive and also open to French and Spanish, because about 30% of the Wills I read that were written before 1860 were not written in English.  We can discuss this later.

What matters is that many states made those books of wills available to ancestry to digitalize and code and that’s how I access them.

The other day I was reading Wills filed in Orleans Parrish in the 1860s, shocked by how wealthy some people were, throwing around legacies of thousands of dollars and leaving lists of addresses of all their properties to be disposed of.  I make a point to look for mention of “slave” or “negro” (they were used interchangeably in Wills, let’s unpack that later) and also if there is some context to the discussion.

For example, I have read Wills where the person mentions that their kids will divide equally all their property including real estate, cattle and slaves.

I have read Wills where the enslaved people are doled out by name (beloved Betsy goes to XXXX) and others where the decedent allows their children to each pick 2 and then sell the rest and split the profit.

Nothing I’d seen before prepared me for what I found in Alfred A. Williams’ will, which I found in Orleans Parrish Will Book #13, page 99. 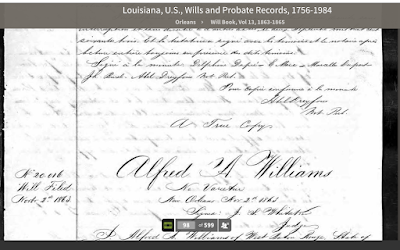 The will before Mr. Williams’ was in French, so I just passed on it and want everyone to remember I didn’t read all the wills, just the English ones, and even though Louisiana became a state (I often read the event described as “Louisiana was granted statehood” which is a whole other way of seeing the relationship, right?) in 1812, about 1 in 5  wills I’ve come across filed in the 1840s-1860s were in French or Spanish.

I feel that you’ve heard me on this point of how connected and multilingual the cities of the  Gulf of Mexico/Caribbean Basin were in the 19th century and I can move on.

In his 1858 pre-Civil War testament, Alfred A. Williams leaves cash to his brother and brother-in-law, and wants a trust created for his minor children and administered so that when each of them reaches 21 they get all the funds accruing since his death. He then inserts something I’ve seen before and because I didn’t go to law school I get to name things and I call it the jerk clause.

He says that if his kids oppose the will then their shares will go to his brothers and sisters. 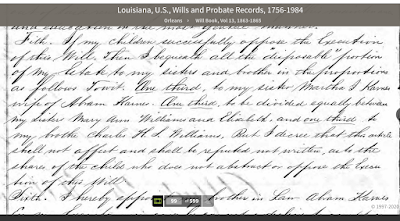 Like how does someone get into a future fight with their kids that happens after their death?

Does it work? Because as I see it he’s going to die in 1863 and most of the wealth his family had when will was signed in 1858 will be on it’s way to be gone with the wind.

The next several paragraphs are assigning who he wants to administer his property until the kids all turn 21, and how that person should be compensated. Yawn. I see this being written in a smoky room over rum, fat bellies and promises. Once you tell someone you’re leaving them stuff, things have to be different between you guys.

I try to be neutral but it’s hard to like this guy, swinging his wealth around.

Then I found the portion of his will where he mentioned slaves, and I feel like I have uncovered the devil, and puppeteer who implied choice and freedom in a situation when the opposite was true.