William Harding's wife, Clarissa Million, doesn't seem to have been involved in the American Revolution  either.

Ancestry shows that Clarissa was born December 15, 1745, and that her mother died that same year.  Clarissa's father died in 1773 before the American Revolution "officially started" and therefore can be ruled out as a Patriot. 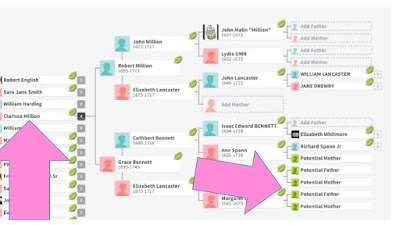 Notice all the "Potential Father" and "Potential Mother" clues I left unread?  One of the hardest parts of research is knowing when to stop, and I know that I'm not going to find a Patriot who fought the British in the 1780s by looking backwards into the 1650s.

Also, a few hours ago I swear one of my ancestors had the notation that they were Chaucer's "5th great-granddaughter" and now I can't find it anywhere and this makes me sad because I think my dad would like a Chaucer to go with his new Thomas Jefferson.

If I follow every lead I will never finish writing this story for you, and I really need to get to the part where all these things come together.

Next let's look at William Morris, born in Ireland in 1860 and died in Sumner Tennessee in 1803.  There are no hints about his service. No wills or church records  offer themselves up. 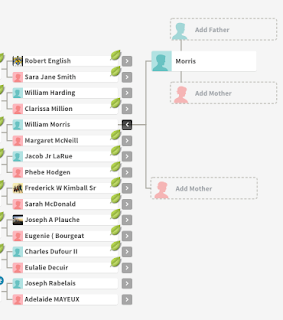 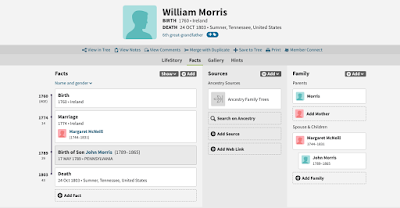 My research hits block after block and I choose to move on to his wife, Margaret McNeill, ancestor #6 of #16 in our hunt for a Patriot ancestor.

Margaret was born in colonial North Carolina and died in Hardin Kentucky, in the region named after the Harding-Hardin family.  Records show that her father, Archibald McNeill, was born in Argyll Scotland in 1720 and was buying land in North Carolina in the 1750s.

I can't see any specific evidence that he contributed to the American Revolution on the Patriot side -- was he a Loyalist? or was he just too old to fight?

I'm not sure we will find these answers quickly, so file them away for another day. 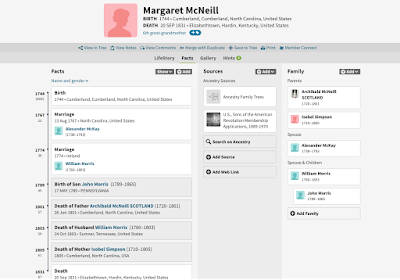