The easiest way for me to go through Ella Mae English’s great-grandparents is top to bottom in the order they are listed in Ancestry.

The top of every set is the father, the bottom is the mother.  The tippy top of your tree is your dad’s male lineage, unbroken.  The middle of your tree involves your grandmothers on your dad’s side and your grandfathers on your mom’s side. The lowest bottom line is your mom’s unbroken matrilineal heritage, and thanks to maiden-name-married-name-widow-remarried-has-another-new-name issues it is much harder to trace than you’d imagine. 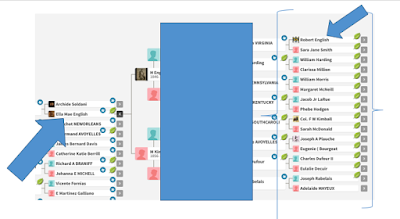 One click on his name and I can see he was in Virginia at the right time and was the right age to have possibly been involved in the American Revolution.

A big hint I see as a historian is where Robert English dies – Kentucky. It took a lot to move westward across the Appalachians in the decades following the American Revolution– resources (often enslaved humans), health, connections, religious fanaticism etc. 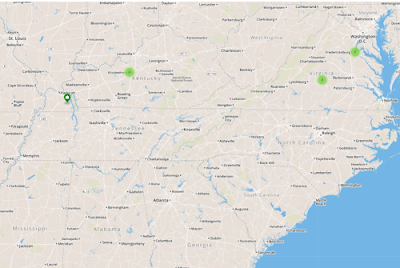 (Map of where Robert English was born, married and died)

To keep this story on track I’m going to pass on going deeper into Kentucky history until I finish the task I set out to accomplish: finding a Revolutionary War Patriot so my father can qualify of the Sons of the American Revolution.

One more click in Ancestry and BOOM there it is.  Private Robert English, 3rd Regiment, Virginia. 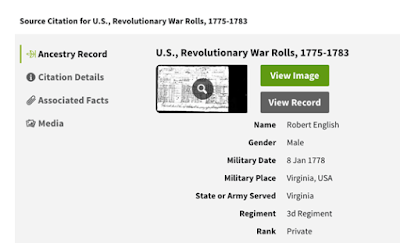 My challenge completed, I keep researching for the game of it, for the sheer joy of the hunt to see how many more I could find.

But first I click around a bit in Robert English’s tree.  His family definitely was in colonial Virginia, most tracing back to the British Isles but wait I found something strange. 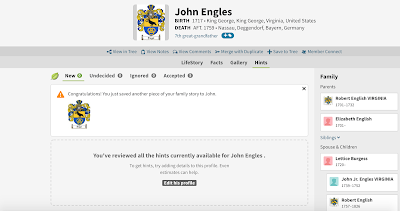 Robert English’s dad died in Bayern during the timeframe and in one of the places where the 7 Years War was being fought around the world.

The fact that John English died away from home, and didn’t bring his sons or family with him tells me that he was in Europe for trade or (more likely) was sent as part of British forces – the same force that would be defeated in the American Revolution a few decades later (and again in the War of 1812, but to bring that up is just bragging, right?).

There’s definitely a lot to research here, in the future.

For now, I’m staying on track with this Father’s Day story. 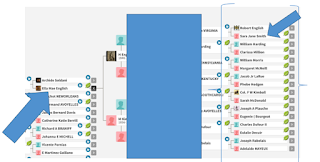 Here's Sara's tree full of ancestors who arrived in New England in the 17th century.
I notice some names are on her family tree more than once, and let's leave that for another time, OK?

I click on Sara's dad, Nehemiah Smith and immediately find a “Sons of the American Revolution” file is attached to his name in Ancestry.   Lieutenant Nehemiah Smith apparently fought WITH the British in the French and Indian War (1755) then fought against the same British in 1778, winning and winning again.

What will I find if I look a little harder?