Here are some of my findings from the Idaho and Arizona inquests.

Wear your seatbelts and drive sober.

Don't try to ride your horse into a saloon and proclaim, "St John the Baptist is thirsty."

Don't live at a sheep camp. People keep dying there.

Oh let me add, don't steal horses, don't steal watches, and don't just drink at a saloon while people roll around on the floor killing each other. That's just wrong.

Stay sober while boating and fishing; don't get out of your boat in a swamp to try to walk it to safety; don't try to rescue your friend who just disappeared under the black water after warning you something is attacking him in the swamp under the boat.

Don't shoot at the sheriff or any of his deputies.  If you have a gun, try to not use it. People without guns seem to be dying by less gun violence than people who have guns.

The one thing that was the same over all the decades and places was how many people lost their lives to accidental gunshots.

A truck hits a bump and a firearm discharges, killing a person outside the vehicle.

A man shoots a rabbit, puts his gun down to go get the rabbit, the gun fires and kills his wife, leaving him a widow with a 2 year old and a 7 year old.

In 1886 there was only one inquest in Apache county, and of course it was for an accidental gunshot.

Someone shoots his brother. It's ruled accidental with no explanation.

Someone shoots his sister. It's ruled accidental with no explanation.

Several people commit suicide by gunshot wound and their deaths are ruled accidental because they were not in their normal state of mind.

I think the most famous accidental gunshot should be the person I would like to have remembered as "wrestles with wolves." 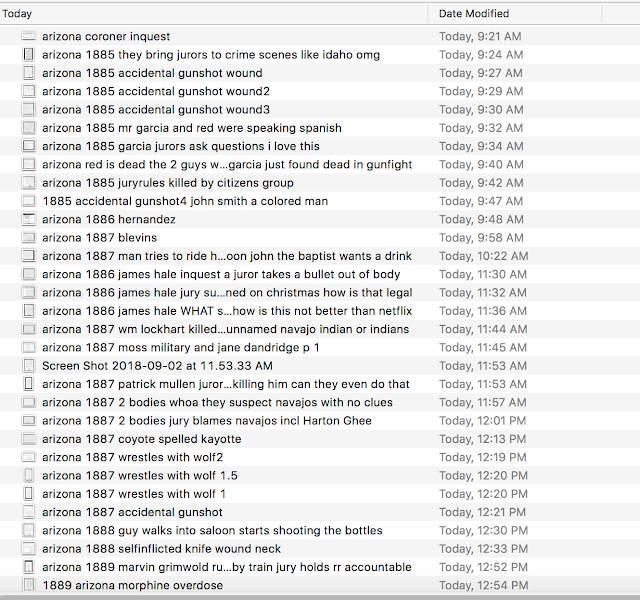 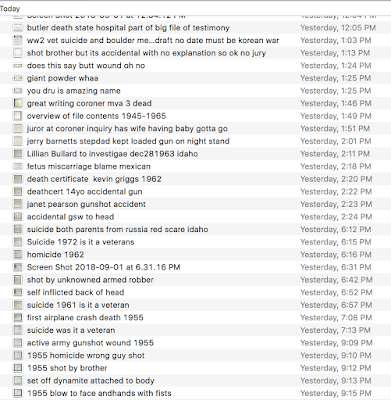 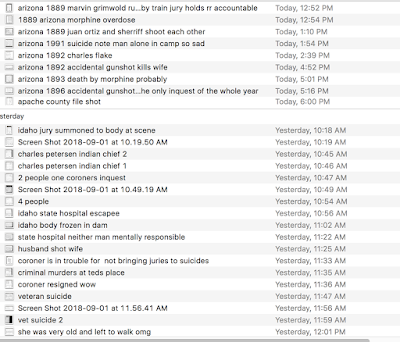 The coroner summoned a jury to investigate the body of a man and in their investigation found a dead wolf about 20 feet away.

Did they poke and prod both bodies without washing their hands before and after? Probably.

Did they find bullets in the wolf? Yes.

The jurors got down low and studied the tracks and trails left in the soft sand and decided the wolf had walked away from the incident injured but not dead, but his final walk was pretty short.

They could not find teeth marks or slash marks or anything like that on the corpse, but they did find he had been shot through the head.

How could a wolf shoot a person?

Was it a shape shifter that moved from human to wolf?

They jurors stand around and offer up all sorts of what if this and what if that and then one of them gets an idea. What if the the wolf wasn't relenting after 2 gunshot wounds, and the man had to turn his gun around and try to beat the beast with the butt of the gun and accidentally shot himself.

Jurors measure the gun and the angle with all the tools they brought with them (none, not even a ruler, much less anything Dexter would use) and proclaimed the death an accidental shooting.