This week my research attention moved from death certificates to coroners inquests.  The big difference is that most people over the decades I've been searching through (1890s to 1950s) die of just a few things: disease, age, accidents (RR, horses, cars),  and gunshot wounds.

I picked the data base of Idaho Coroner Inquests. Why Idaho? Because Idaho has so many pieces that represent the west at that time - mines, farmers, saloons, small towns full of people who come from somewhere else -- Virginia, Utah, Maine, Saxony, Russia, Wales - and later - Mexico.

I  settled on the county of Bingham (1863-1951) because most of the first documents were written in very nice handwriting and clearly narrated the different parts of the coroner's inquest: notice of body found; if it was an accident or suicide a jury is summoned; jury listens to witnesses;  jury submits written finding to coroner; coroner writes report basically repeating jury findings.

I reviewed all of the approximately 700 pages of testimony and findings, and then I had a few questions about how things ran back in the 1890s so I hunted around for another county (Twin Falls), took notes on what I found there, and then looked for a different western state or territory that also had publicly available coroners inquests.

Thank you Arizona,  your files are beautiful to behold. I picked Apache county because of its proximity to New Mexico and Texas and also because I believe Navajo and Hopi lived in the region and I wanted to see if that would make Arizona much different from Idaho.  I fell into a research hold of 700 out of the first 1400 files and have paused to rejoin society and report some of my findings to you.

The first and most important thing that stood out to me which was practiced in both Idaho and Arizona was that when a body was found and could  perhaps have met their demise by suicide or homicide, the coroner must start and inquest and summon a jury immediately.

The body was to be left untouched until the jury could come inspect it. 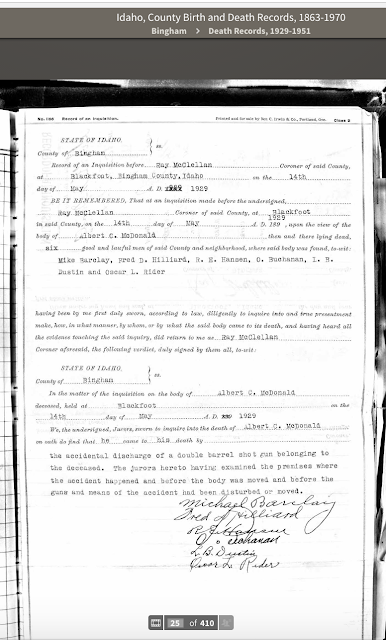 Jurors routinely poked and prodded corpses to make their own minds up as to whether this could be a homicide or suicide.

I cannot imagine what it would be like to serve summons to jurors and bring them immediately to view a corpse; weren't they traumatized? Or was death normalized?  I do notice that all the jurors are men (unless women are signing their names using initials like EW Smith) and wonder now if women were excluded from juries for so long to protect their perceived gentler nature.

But I digress, because my gentler nature lead me to read about over a hundred deaths across about 55 years in two states, and I learned a lot.

Do you worry about dying in an airplane crash? I bet they didn't.  The only death by airplane crash in all the records I've investigated was Twin Falls, Idaho, 1955. From what I can tell, two WW2 vets fixed up an older plane -- but they didn't quite fixe it all the way --  and the rest is history. 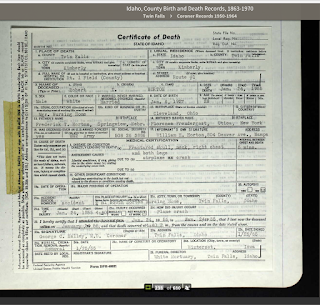 I wonder what it was like to be Japanese in America after WW2; multiple states were passing anti-miscegenation laws invalidating marriages between people with 1/8 (Chinese, Indian, Mexican, African, Japanese) blood. He must not have been treated very well here during and after WW2 (someone else can investigate that, I will gladly share), and his prospects after Japan's defeat couldn't have been too shiny. 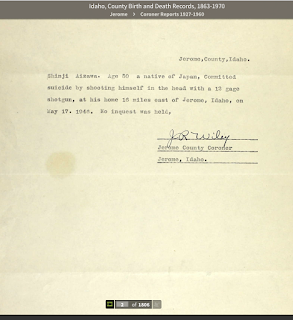 Check out the story of James Hale. 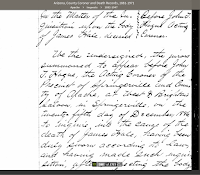 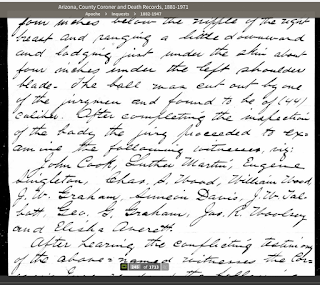 They all show up and a juror starts poking around in the corpse and "the ball [bullet] was cut out by one of the jurymen."


So, finding out that juries used to be crime scene investigators wasn't the biggest thing I found out.

I kept good notes and marked files of this and that when then came up and yes, I have found something about deaths in Idaho and Arizona across the decades that I to share, something I did not expect to find.