I bet you didn't know that reading criminal case files from the 19th century is an awesome way to pass a weekend night.

For fun -- and because I have terminal, incurable, escalating curiosity -- I carefully read the first 10 cases that pop up when I put the letter A in for the last name of the defendant/prisoner.

Murder of an unknown child,  failure to pay taxes,  several cases of illegally selling liquor in the Indian Territory, one rape and one case of adultery.

They guy charged for adultery was Dr. Honey, and he was cheating on his wife with someone's little sister, so he will be sent to jail for 2 years.  That was the least complicated of all the cases, so I will save the other 9 for another day.

Instead, lets dwell on the high numbers of racial and ethnic minorities sentenced to jail in the 1880s and 1890s in the less-settled, violent frontiers regions of the US.

When I started my research I expected to see more people sentenced for violent crimes and fewer for tax and alcohol violations; I didn't expect to see anyone tried for adultery,  and I don't know why I'm so shocked to Victorian morality  (enforced by Marshalls, Sheriffs and penitentiaries; reinforced by growing cultural acceptance of institutions like  prison islands and asylums for "imbeciles" and "feebleminded")  raised her ugly head to keep social order.

Take, for example, the case ofThe United States vs Mary Warner.
Ms. Warner was indicted for adultery based on several witnesses saying that she and A.L. Daniels - a single man - rented a room in a boardinghouse together, presenting themselves a husband and wife.

Nobody had a problem with them, they didn't bother anyone
but then a rumor swirled that she was really a married woman,
and then a little investigating was done by Post Office people
and the such and it turned out she WAS married.

So the Western District of Arkansas found her husband and brought him into court to say something along the lines of hey whats up here's your wife, sorry she was bad, should we spank her? 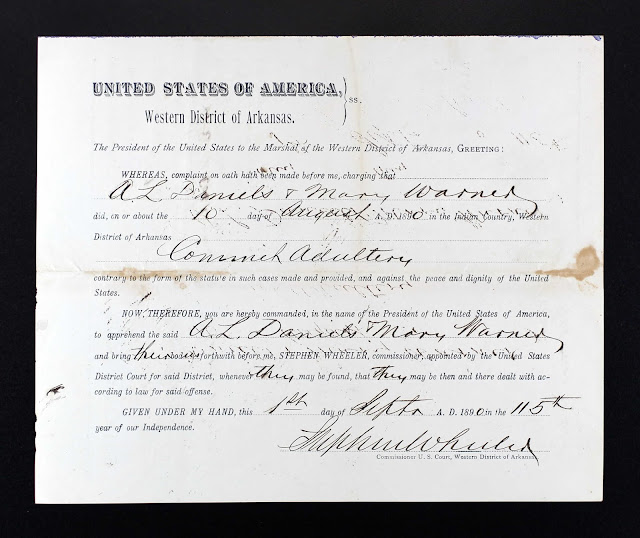 And the husband testifies under oath that he and Mary were only married 2 years, and had recently moved out to (Oklahoma/Arkansas frontier) and it didn't work out so they just broke up.

They didn't file any paperwork but they were over and whatever,
so he's fine with not calling this adultery, there was no crime no harm etc.

But no.
The United States cannot have women
going around acting like they are free,
what kind of a precedent would that set? 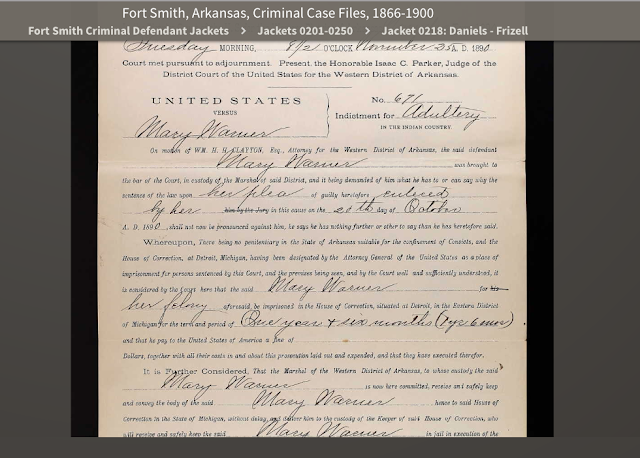 So Mary Weaver was sentenced to one and a half years at the Federal Penitentiary in Detroit.  I tried to find more information on her, but the trail ran dry.

That's how I ended up looking at mugshots of prisons entering San Quentin in California. 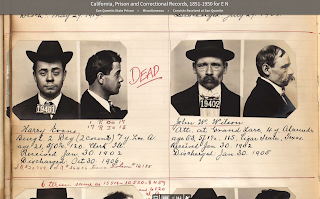 And after that I read about every single person -- free and slave, white and black - who died in a small county in Georgia in 1859, and found a horrifying  cause of death repeat over and over -- 5 on one page out of 40 deaths; 6 on the next page  --  for one particular age/race.

There are so many easier stories to be told that I'm not sure I even really want you to know what I found on those mortality sheets. 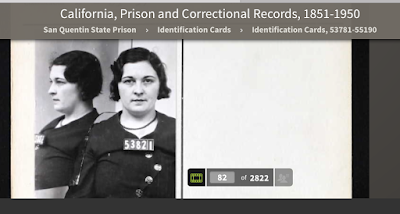 I met (her file) while I was researching prisoners sent to San Quentin in 1933.  She is a stenographer with a few aliases who has been sentenced to 1-14 years for forgery, with a steeper penalty because this wasn't her first felony.

She had been to prison before and then repeated the crime anyway; I imagine her forging wills and signatures and banknotes and all sorts of glamorous things, growing bolder and bolder until POP it all fell apart. Just like last time.

I didn't find any more arrests for her, and I didn't see that she died while in prison, so  I have a feeling she and her advanced creative writing skills ended up OK.