What I found is worth sharing.

This isn't the treasure, not yet.

This is just the journey. the bridge from here to there.

So here we go. Please look at these documents with me: they represent about 1% of the forms that I went through.

Celia Gleason, aged 11 months, was taken back by her mother six days after arriving at the poorhouse. Hooray! 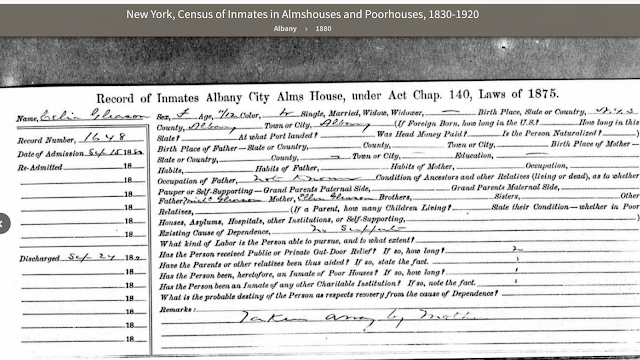 This homeless and destitute guy is a German-born widow who was a jeweler. He has no children, no family.  This breaks my heart. 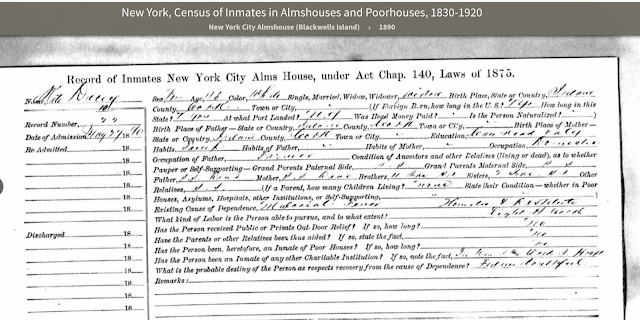 John Fitzgerald - 70 - says that he  has sisters in New York but he can't remember their addresses.

Elizabeth Doran has 6 sons and 6 daughters and her husband is at sea but history cannot be trusted because she appears partially demented.

Three children abandoned by parents and then claimed days later.  This is everything.

77 year old Ireland-born widow Ann Hamilton sprained her ankle and lost her money. She was judged a state case.

John Butler - one of the few black patients/residents - died one hour after being admitted.

I could go on for ten more posts like this, or I could save it for a book.

Either way we eventually get to the one that I click on that had been waiting for me (for us) this entire time.

It first caught my eye when it said for occupation: Writer.

Out of 1500 only one said Occupation: Writer.

And the name -- to me --  was recognizable immediately.

I doubled checked ...and ... for Father's Occupation it also said "Writer."

I just had to be.