Pandora's Safe #7: Blackwell Island - This woman is married to a colored man. She is ignorant, cannot obtain any further information from her.

The best part about doing independent research with my students is teaching them (showing them?) the joy of hunting through data, not knowing exactly what you will find.

This is the opposite of the History Project mentality where a student would propose WHAT they were going to write about and then set out to find information on their subject. If is already widely known that (for example) that a book or a person or a speech is important because it (insert thesis X Y Z), what real value – or excitement? Or sense of contribution? – could be eeked from the time spent reiterating what is already known?

The most important and valuable part of doing independent primary source research with students this semester is finding all these points of curiosity.  We pull out globes and flip through books and google “Galicia” and wonder if someone’s great-great-grandmother could have been Anne Frank’s schoolmate. I ask the student if they knew who Anne Frank is; they said they’d heard of her but… no… and we spent a bit of time having a talk that we never otherwise would have had in a traditional lower-level survey college course.

I personally love data. I love big stacks of letters and lines of census questions and questionnaires documenting each admission into asylums. Lately I’ve been spending my free time looking through admissions to Blackwell Island, New York City’s asylum for the destitute and poor. I pour through over 1300 entrants (more in the colder months), noting that the characteristics most of them shared was being foreign-born (Ireland, Germany/Hanover/Prussia, Canada) and widowed/single.

Most of the applicants appeared to men, and most of the women were over 45 and widowed.  The clerk noted the person’s occupation and habits (intemperate or temperate) as well as those of their parents. There was a line asking “Existing cause of dependence” and one asking “What is the probably destiny of the Person?” followed by a big space for Remarks.

I read all the cards and took multiple screenshots for you. I was fixated; while Zoe and her boyfriend watched the end of the FSU game I’m lost in 1890. “THE MOM CAME BACK FOR THE BABY!” I shout, then minutes later, “Ohhhh no, she died. Just three days later.”

Zoe half listens and half shssshhhs me as FSU loses and I hit gold.

Or at least it’s shiny like gold, and it’s definitely not what I would have expected to find, not in any way possible but if you've been in class for the lectures on Shakers and Millerites and Oneida  you will get it right away.

But until we get there, here are examples of what I’ve been reading (and my comments).
Isn't research grand?

86 year old Rosa Donelly says she has no friends.

Thomas Winchester is paralyzed. Both of his parents are dead.

Mary Costello has "intemperate habits," a broken jaw, and is destitute. 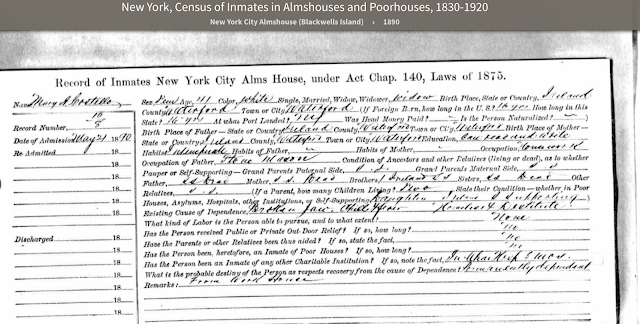 Charles Perham has lost both of his arms.

This woman is married to a colored man. She is ignorant, cannot obtain any further information from her.

Heavy and Old; sent to an old soldier's home.