Claim Your Ancestor #5: Right Along the Underground Railroad 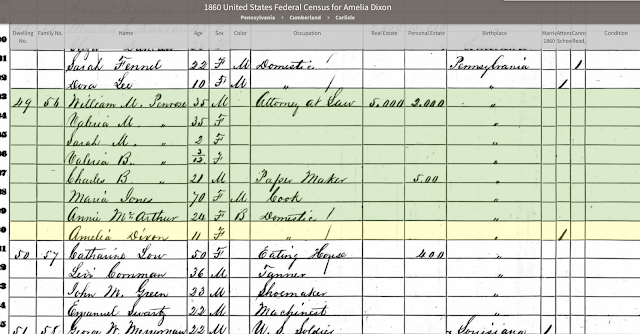 The earliest document I could find on your ancestor Amelia Dixon was her at 11 years of age, living in Pennsylvania right along the Underground Railroad.

If this is any clue to anything, this census sheet implies that the head of the household - William M Penrose - is  neither white or black but is mulatto;  everyone in his family is implied to be as well.

Annie McArthur, the "domestic" is recorded as Black, and Maria the cook is mulatto, and perhaps is also William M. Penrose's mother and if she were, they  probably wouldn't casually mention this to the  census taker.  Or maybe the census taker just assumed William's mom was the cook. I wouldn't doubt it.   Because there is no race noted next to Amelia Dixon, it is implied that she is the same race as the person above her - black. She has no skills and no family and that lack of information is information in itself.

Now, let's look at who lives next door: not a family but a group of skilled single black wage earners --  a person employed at the local Eating House, a tanner, a shoe maker and a machinist.   Perhaps they were all born in Pennsylvania as they told the Census taker, but if they were, where is their family??? Could they be refugees from slavery? Because if they were, I doubt they'd tell the census taker.  You should investigate this.
on February 11, 2018