It begins in the Kansas City court of common pleas in October 1861.

Kevill and his business partner Turner file a claim for $7, and summons are dispatched for John Soldani to appear at the Jackson County courthouse on November 18, 1861.

Already embarrassed by the swindle, he is now having to drag the story into public and repeat it.  On top of that, I'm pretty sure John drinks. At least, when the saloon was going well he probably drank.  Did you think they were drinking from the Mississippi? Many people drank cider, beer and wine as part of their regular diet. Some drank more.

I just get the feeling that John Soldani was kinda buzzed and also feeling on a lucky streak and then POP it all ended when he was swindled by a guy who emptied a safe in front of him.

John probably thought about it day and night.  He was disrespected, dishonored, publicly disgraced. He wasn't going to just let it happen. Not him. He let it burn a hole in his stomach and that fire would scorch the lives of everyone who tried to make a life with him from that point on.

On November 18, 1861 both plaintiffs and John Soldani, the defendant, appear at court. The documents say that the defendant asked for a continuance and is given one.

I bet he gave them some dirty looks too.

They come back to court on November 19 and the defendant has all sorts of motions to dismiss. Don't ask me who his attorney was but I'm impressed.

OK, now it gets good.

John Soldani sues them back for $90.

Then he withdraws his suit and challenges all the facts the plaintiffs laid out. He asks for a jury to hear the case.

The names of each juror is written out neatly.  I won't bore you with them.

They are unable to agree.

The judge tells them to go home and come back on Saturday.

They still can't decide. Finally on November 23 they are discharged.

The court is going into recess and schedules the next day to be January 25, 1862.  Quite a break there.

Another jury is assembled, hears the case and can't decide.

On January 30th, they start the case all over again.  Jurors are summoned and a new court date is set for February 5, 1862.

This jury finds in favor of the plaintiff -- $7 -- and rules that the defendant must pay $54 in court costs.

Without reading any further, I am 100% sure that John Soldani is muttering "over my dead body" when he is presented with the judgment. (continued) 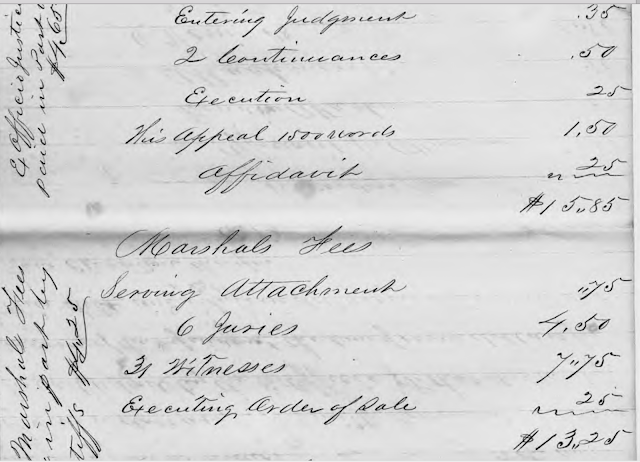 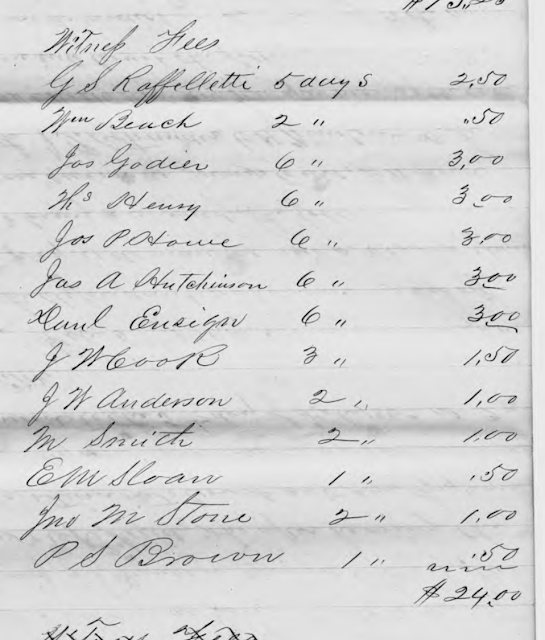