If this were one of those super cool ancestry shows on TV, the host would ask me to turn the page in a book and give me a second to read something. 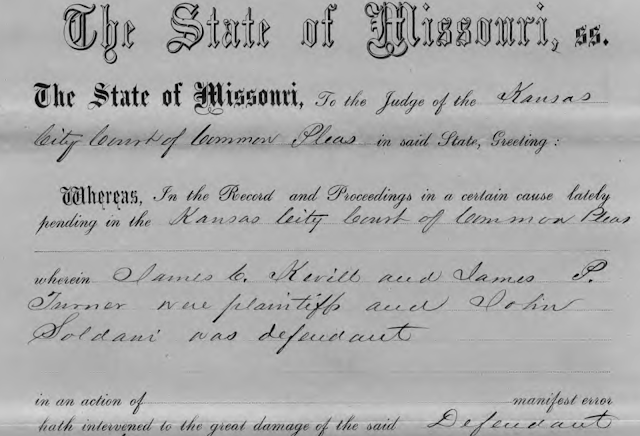 I would read it once, then again, then maybe a third time because so much of it is a little fuzzy, then I could laugh so hard that I would need to cover my mouth.

For generations the Soldani family has been looking for Jean Soldani and all this information about his life  was hiding in plain sight, right up the Mississippi River in the state that coyly calls itself the SHOW ME state.

The host would tell me to turn the page again and I would sit there reading and they would definitely edit this part down because it took me about two hours to read the entire case and all the appeals.

It all makes sense. All of it.

Here's how it went down.

Kevill brought the safe (which had belonged to a Mrs. See, possibly the widow of a Mr. See, a retiring grocery) and key to a public place be exchanged for the $7.

John Soldani didn't need that safe any more than he needed an iPhone charger and anyway it wasn't the safe he was really buying; he was gambling $7 that something "worth being locked up in a safe" was inside, something worth $700 or $7,000 or even more.

According to court documents and multiple witnesses called to testify throughout 1861, 1862 and early 1863,  Kevill opened the safe in front of Soldani and emptied it out completely, taking for himself  a stack of city warrants (a financial instrument like bonds) and bank registers.

John thinks this is a joke. It has to be a joke.

Kevill says no, he was only advertising the safe and a key.

That's all he promised.

That's all John's getting.

John Soldani laughs and snatches all the stuff back from Kevill.

After a skirmish it becomes clear that Kevill was intent on keeping the contents.

Soldani refuses to accept and keep the safe, and refuses to pay the $7.

He will not be cheated or embarrassed or swindled.

Kevill sues Soldani for $7 in common court on the US frontier in the middle of the Civil War.

The case will make it into textbooks for decades, and it is most likely the reason John-Jean-Giovann Soldani ran away from Missouri used so many names.

But I'm getting ahead of myself.