SK: I hope all the soldiers and veterans know that there are people out there who want to give back to them and make them comfortable and happy.

AMH2020 student
“I've learned that people will forget what you said, people will forget what you did, but people will never forget how you made them feel”- Maya Angelou.
The people of United States Military are those we should take our hats off to and get on one knee for. All those men from the navy, marines, and army keep us safe and let us live the lives we always wanted without any complaints. We should do the same in helping those deployed or retired live safe, tummy full lives because that is our job as citizens. We cannot back out on the men that have risked everything for us because they deserve so much more than what they are given. Americans need to step up by sending more boxes and donating more money to the troops, they should not have to carry out the struggle of what they went through in war in real life, they deserve a break. Maya Angelou’s quote makes me think after I help out veterans or send boxes to Afghanistan that I feel like the good man behind the window, that one does not know. I feel like I am that man who gives what he can and is appreciated even though has no clue what he looks like and how good his really intentions are.  In doing my service project I thought how my nice deed of buying good and shipping them to men deployed made me a better person and impacted someone’s life greatly and community.
I chose the job in mailing a box to Afghanistan and it was definitely one of the highlights of my year. I admit right now I am not a person who gives back to the community at all, I would much rather donate money than physically doing the action. I would rather give money because when I do physical work and see the poverty and conditions people are living in leaves me very emotional and depressed and I would much rather not feel those emotions. By mailing a box to Afganistan I was able to see a different part of myself that I never before encountered. The first task in creating the box was going to Publix to buy the goods required for the box and I literally went ham. I felt as if the best way possible to support is by buying everything on the list, so I did. I thought of Cuban grandma at that moment because all she wants is for me to do is “comer comer comer hasta que yo me explota,” she taught me to always be giving in everything I do and never take the cheap way out of things. In picking each good I felt happy that I was giving back to those soldiers who have nothing in the ugly, hot, desert that is Afghanistan. It was time to go to the post office and when I got down with all the things I bought I realized I bought so much more than what would fit in a flat rate box. I thought mailing something would be a piece of cake but it ended up being “una locura.” I have never mailed anything in my life and it took me forever to figure out everything. Every time I would go to the counter with a sealed box thinking it was done the lady kept telling me something else was wrong, I kept thinking, “Que dificil es esta mierda, soy un tremendo bobo”, It was time to pay and send the box and the lady at the post office was already giving me a rude look, not caring I put the box on top of the counter, so excited that the stuff I bought would soon be in the hands of a soldier. The lady then began to roll her eyes at me and tell me rude comments about packing the box so much but I didn’t care. I then paid and left and felt like a new person because I gave back to the boys out there fighting for us.
My core value is happiness and mailing a box to Afghanistan related to my happiness. I am the type of person who always gets Christmas gifts for everyone because it makes me happy when I see them light up when they receive something special that I bought them. Also, I love taking pictures to remember those happy funny times that I can relate with my friends and family on whether it be karaoke to Celia Cruz on Christmas or attending Ava’s college party, times I want to remember forever. From going out to buy goods and shipping a box to a solder I believe that I reached their happiness because they got a present full of the things they love. I just wish I could see the look on their faces when they received it. The impact that I made on that soldiers’ life must be a big one because I hope he believes that there are people like myself who thank him for being over there and putting his life in danger so I can live a happy life. I hope all the soldiers and veterans know that there are people out there who want to give back to them and make them comfortable and happy. I have confidence that the project of sending goods to Afghanistan will touch all of TCC and lead to all of Tallahassee carrying out actions like these to impact our troops. 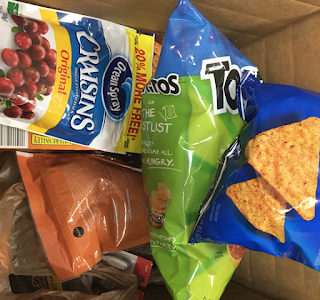