R: At the end of the day, all it can take is a smile, one kind word, or one second of a good deed to make a big difference in someone’s life, and those small moments are what endure and truly matter.

AMH2020 student
When first reading this assignment’s instructions, I let out a small groan. Another one of these essays where you must link a quote to your assignment and explain it. Being the end of another long semester riddled with obstacles, from hurricanes to a break up and exams, this was the last thing I really wanted to work on this week. I was ready to sleep in for the first time in months, to just chill and play a video game. As if I didn’t already do that enough. I really should be trying to ask Jamie on a date or something, and the closest I’ve gotten to that is studying for your Final with her all week.
I sat down and skimmed through the choices for quotes to start this essay off. Normally, I would randomly pick a quote and make up the essay as I go along, but this quote from Jens Stoltenberg hit me like a bolt of lightning. “When autumn darkness falls, what we will remember are the small acts of kindness: a cake, a hug, an invitation to talk, and every single rose. These are all expressions of a nation coming together and caring about its people.”  I had spent most of my life living by these words, every act being for the benefit of someone else because it was just something kind to do, and someone had articulated it to other countries. However, with these acts usually came a feeling of appreciation that wasn’t because they were the morally right or selfless thing to do, but because it benefitted someone else in a way that they wouldn’t do for others. I’d spent a lot of the last two years feeling like being who I am, valuing integrity and respect, chivalry, lifting others up instead of throwing yourself into the spotlight, had just led to me feeling taken advantage of and not succeeding in life the way other classmates with bigger egos and not a selfless thought were. This led to serious depression, weight gain, and loss of excitement for what I live and breathe; Music.
Reading this quote became a kind of wake-up call that was much needed for me. I also happened to have read it after attending a middle school band concert for some students I teach. My little protégé, a 6th grader I’d known for a few weeks, ran up to me with a big hug after the concert, and I realized how much an hour of encouragement and help each week meant the world to him. It was a small moment like that which shone through a building Spinal Tap-black cloud of emotions I’d been dealing with, and which has helped reestablish my faith in what I believe in completely. It helped make me realize that teaching Music and giving that gift of encouragement and drive was my calling. At the end of the day, all it can take is a smile, one kind word, or one second of a good deed to make a big difference in someone’s life, and those small moments are what endure and truly matter.
This semester, my class and I were tasked with completing a Service Project for my AMH2020 class. This required finding an activity, a good deed, or an event to assist in that gives back to the community or helps someone out in some way. The opportunity arose to serve meals at Veteran’s Village over the semester. Veteran’s Village is an apartment complex where Vets temporarily are housed and taken care of as they adjust to being back in the world, gathering their bearings. Having many family members in the armed services, veterans of and currently serving, as well of thoughts of joining myself, I decided it would be the least I can do to give back for their sacrifices made.
I initially wasn’t sure what to expect from the veterans.
Sometimes people aren’t very appreciative of things you do for others, as has been the case with some homeless people I’ve tried to give food to but just really want beer and cigarette money. While the serving of food was very hectic, everyone was fortunately very appreciative and kind as I handed them the salads I made. I ended up coming again to serve meals during my birthday week, and made a big Bolivian dish for everyone. This dish was a hot, steamy plate of steak, French fries, and hot dog slices, all doused in some gravy
One veteran spoke very much on how grateful he was that we took the time to see him and made sure he had a hot meal. I could see in his eyes how much he really meant that, after the experiences vets can go through, and knowing they were kind of on their own here at home. Small smiles and moments like that made any effort, big or small, worth it. It’s something I’ll always try to remember through the hard times, so that others can know it’s worth it, too. 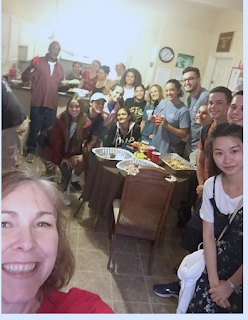 This was the only photograph I could find of the event that I was in, but I’m standing behind the man I’d give a TV to, so I’m not complaining. I’ve enjoyed taking another one of your classes this semester, and will see you in the next one!