AMH2020 student*
“When autumn darkness falls, what we will remember are the small acts of kindness: a cake, a hug, an invitation to talk, and every single rose. These are all expressions of a nation coming together and caring about its people.” -Jens Stoltenberg.
For my service project, I decided to do the Victory box to Afghanistan for the veterans deployed. One of my core value is family and I have had a close family member in the military so I know what it feels like to be the family of someone. I also know that I would want someone to do the same as I was doing for my family members when they were deployed. Another one of my core values is respect, I respect everything that these men and women are doing for their country overseas. Many times, these people are not recognized for the work that they are doing every day and if doing something as simple as sending them a box with food and a letter to put a smile on their face, I will. One more of my core values is unselfishness. Many people who only think of themselves would use the 15 dollars it takes to ship a flat rate box out, to buy themselves food, clothing, or they would use the money they spent at the grocery store on food for themselves or for their family. But not being selfish is if you have the money that you can put aside little by little that and one day add up to being able to send a box to a soldier
So next time you want to by that really cute sweater that you already have in 2 different colors, or want to buy that McFlurry and fries because you just want a snack, put the money to the side that you would be spending on that and put it towards something that someone else can benefit from as well. This pertains to my major because right now I am looking into going into the medical field and I have a very caring heart. Because of this I really want to help people in even the smallest ways every chance I get. The health profession is known for bringing smile to people’s faces or by bending over backwards to help someone with what they need.
I think that the impact this could have on some people could really make their day and make them feel like they have done their good deed for the day or the month. I also think that this would make the community a better place because soldiers could come back to their communities and know that everyone is proud of what they are doing that nobody sees.
My experience for this service project was a very impacting one. Picking out the food was enlightening because you could see what food soldiers really miss when they are away and what can withstand the trip to Afghanistan. Writing the note made me feel like I had a very personal connection with the soldier I was writing to because I told him/ her about myself and I got to thank them for all the amazing work they do that goes unnoticed.
These days with the whole controversy of NFL players trying to make a point by sitting or kneeling during the national anthem is disheartening for the soldiers. They are away fighting for people’s freedoms and defending the flag that people are disrespecting in a way they should not. Just by sending this Victory Box made me feel like I could change a soldier’s mind and let them know that they are still appreciated back in the United States for everything they are doing. Just doing this project once for an extra credit class has made me want to do it more often and keep sending boxes to these soldiers a few times a year. Until now I had never thought of doing things like this for the soldiers because it is not advertised as much as it should be or it is through a group and you are just donating money. This experience was super personal in the way that I could send them a letter introducing myself and they could tell that I put the time and effort to go to the grocery store with them in mind and buy foods that they would like overseas. The expense really is not that much for the impact you are making on someone’s life. You never know what they are going through especially overseas. They may not have heard from their family in a while, or they have recently had a death at home, or someone in their platoon just passed away. All of these could be happening to any one of them right now and getting this victory box just made their day and cheered them up from whatever they are battling. 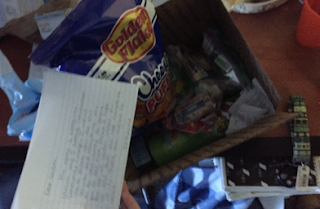 I think that if everyone did this even once a year they could be making such a big difference in someone’s life and make them realize that they are appreciated for what they are doing. Almost everyone has a core value that could fall under how this project connects to what they believe in and nobody has an excuse as to why they cannot help someone who is in a tough spot in their lives and needs a little reassurance. If everyone would come together and help one another out in even the smallest ways the world would be in such a better place and everyone would be happier. Because of this project I feel even more motivated to help others who do not even know me but will appreciate the nice gesture from someone. Making hard times easier by a couple of dollars and a few kind words really brings happiness to my heart and makes me feel like I am really doing my part in the world to help others who need a little pick me up in their lives.
on December 12, 2017