B: I think being away from home, in harms way, and getting a box filled with all the things you miss would be a great surprise.

“I’ve learned that people will forget what you said, people will forget what you did, but people will never forget how you made them feel.”  - Maya Angelou.
I sent two Victory Boxes to Afghanistan for my service project.  I sent one box in October and another box in November.  I am planning to send another one in December.  I thought this project was a great idea.  I think its very important to show our military that we support them and to send things that they might miss while being away.  I was surprised when I saw the list of items that they requested.  I imagined they would want things like razors, tooth brushes and tooth paste, they were on the list.  They also requested journals and pens, something I would have never thought to send but I understand why they want these.  They asked for a lot of snacks like Mike and Ike sours, red vines, pizza flavored pringles, twinkies, takis, and trail mix.  This is stuff we just take for granted, being able to go to the store and get whatever we want.  It would be hard to be in a different country away from everything and everyone you know and love.
Some of my strongest core values are kindness, compassion, and service.  I like to take care of people.  I like to help people.  This is evident in all areas of my life.  This project is perfect for my core values.  When I was shopping for the stuff to send to Afghanistan, I felt like I was helping someone.  I thought about what their daily life might be like.  What their struggles were compared to mine.  I have a lot of respect for the people who serve in our military.  My major is undecided.  I do have a passion for exercise science.  I would love to be a physical therapist but there is so much education involved in that career.  I’m not sure if I am up to that.  I also am thinking about Athletic Training.  Both of these careers involve helping people.
I think being away from home, in harms way, and getting a box filled with all the things you miss would be a great surprise.  I hope it would let them know that we care, we support them, and are grateful for what they are doing.  When I was in eighth grade my good friends’ dad was sent to Iraq.  He was an orthopedic surgeon and was being sent there to do surgeries on soldiers.  His operating room was a container truck.  He had to do surgeries with a rifle hung over him.  They were never allowed to take the rifle off.  When he was there he was telling his wife that he missed working out at the gym.  My dad sells exercise equipment.  He fixed him up a bag with different kinds of bands, and directions on how to use them.  He would  be able to do a full body workout with everything my dad sent him.  He was so happy to get that bag.  Not only for the workouts but just knowing that my dad cared enough to go through the trouble of putting all of that together for him and mailing it.  I sent him a couple letters while he was there.  He sent me back some pictures of his base.  When he returned, he brought me back some of the money they use in Iraq and a t-shirt with his squadron on it.  He told us how much receiving letters means when you are deployed.  I come from a military town.  I have a lot of friends with family members that are in the Navy.  I’ve seen how much they sacrifice when they have to leave on deployment. They don’t really know when they will be returning.  Sometimes they can’t even tell you exactly where they are going for security reasons.  I think that would be really hard on the family that is left behind.  They miss things like Christmas, graduations, birthdays, it doesn’t really matter the importance of the event, if they are deployed they have to miss it.  I liked this assignment.  It really makes you think of other people, something college students aren’t that great at.  I think we need to come together as a society more often and help those who need

it.  It would make the world a much better place. 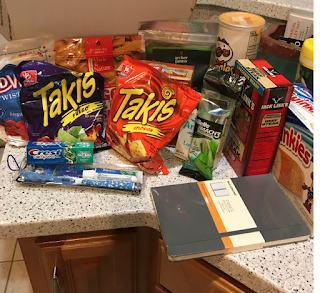 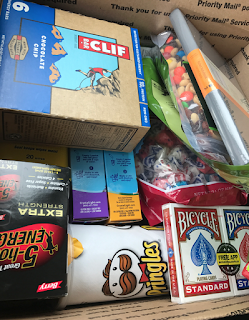