Pandora's Safe Part 1: Where is Fear?

I can’t stop researching, and so I don’t.

I spent most of today clicking away in between cleaning the oven and cooking leftovers into new things and buying Fanta and figuring out what smells like sad wet dog in the laundry room (it was the dog’s blanket. I guess she put it there for me to wash? Go figure).

Every single ancestor in my ancestry tree has to be matched up with their parents, and if possible, their grandparents.  I can’t leave any orphans, I can’t leave hints unfollowed. The tree keeps growing exponentially and my mind gets a little numb but I can’t stop until I find* it.*

I don’t know what that “it” is, but it is waiting.

Maybe it’s a resolution to my grief, pushing me to find more family as I learn to let go of Abuelo.

Maybe it’s trying not to face how December 1 will mark ten years since Abuela jumped into the sky.

Maybe it’s also the review I heard for the new movie, “Coco,” where the ancestors live until the living forget them.  The idea of ancestors disappearing  brings me to tears and I want to list and name every single person ever.

Yes, now that it’s in the sunlight this is probably displaced grief, but feelings have to go somewhere and right now these feelings are making me drill away through history, mining for the treasure I will surely recognize.

I just know it is waiting for me.  Perhaps gamblers feel this way, but I assure you I’m not gambling because there is nothing to lose.

My aunt read what I wrote yesterday and asks me a few questions that I am sure I will answer, but first I have to keep going back up Temperance Avery’s family, back to her mother, Thankful, and her grandmother, Fear.

Imagine being a devout Puritan living in colonial New England and naming your child “Fear.”

Were all the good names used up?

Or was it about facing Fear? About Fear bringing forth treasure? Because the actual fruit of Fear was Temperance, who then bore Thankful and together they tell a story of large colonial families tangled with cousin marriages and widow marriages.

I imagine leaning out a window (it doesn’t have glass, y’all, not in 1645 and also all the neighbors listened in on each other and testified about it and you can read all that stuff but I digress) and calling, WHERE IS FEAR??

DON’T WIGGLE AT CHURCH FEAR, THEY WILL BONK YOU ON THE HEAD WITH A STICK (I have certified PhD read about this and am authorized to add that detail).

GOOD NIGHT FEAR, DON’T KICK YOUR OTHER6 BROTHERS AND SISTERS YOU SHARE A BED WITH WHO HAVE GOOD NORMAL NAMES.

My dog can’t stand seeing me sit still and demands a walk.  I make her run so she’s get tired faster, and also to punish her for the fact she still won’t go anywhere near the 16th, 17th and 18th holes on the golf course, the pretty part with the lake that is so purple lilac butter cream orange on shimmery water at sunset.

Ever since she ran away from me on Halloween I don’t push her, but I am deciding to take walks without her if she’s not going to let me go my way.

After the walk I settle back down to get the answers I knew I could easily get for my aunt, but first I had to go a little farther back looking for new treasure.

Then I admitted it to myself. I wanted to be related to someone who came on The Mayflower.

That sounds like treasure, right? Once I found a generation of ancestors that marry and die in the 1630s and 1640s in Plymouth, I just have to know when and how they came over.

I see page after page of information that tells me  I am descended from some of the earliest British colonists (Virginia, Plymouth, Connecticut, Rhode Island, North Carolina), and it doesn’t feel right to only be finding this out later in life; don’t ask me how it would’ve have mattered if you’d told me.

Maybe I wouldn’t have cared.

Maybe someone did try telling me and I had nowhere to put it.

I’ve tried telling both of my kids but so far they mostly smile at me and ask for more mashed potatoes and if we are out of mashed potatoes can I make more later please?  I have mastered mashed potatoes this year, check that off my life list of things to do and back to researching.

My ground zero hint is reading that my way back grandmother Susanna Ring being born in Leyden, Zuid-Holland, Netherlands in 1606.

In case you skipped class or if I went too fast that day, be reminded that the original Puritans were challenging the church-state-king and were so persecuted that they left and went to Leyden.

Google "Scooby Separatists" and "Puritans in Leyden" if you don’t believe me.

And yes this will be on the test.

Anyway, their time in Holland wasn’t what they’d hoped for so then they get a boat then another boat and then, well, you know what comes next.

If you don’t, then OK. Their first boat, the Speedwell, got only as far as Plymouth (England) where it was sold and they moved on to get the Mayflower.  The Mayflower had permission to go to Virginia (Jamestown was chartered in 1607) but it ended up much farther north, oops.

But back to the story.  I kept researching and I think I have tripped on a very funny very awesome story for you. But not yet. I still have to answer the questions my aunt gave me!! Is this how students feel when they need to study for a test but they really prepare by relaxing by watching Netflix?

Also, I researched a bit more and found William Penn, which under normal circumstances would be reason to love this journey, but it isn’t the best treasure today.

Nope. I found it a minute later, and when I found it, I knew.

It was something that you might not have recognized If you didn’t know what you were looking at.   It’s perfect, it’s everything, it is the story I want to tell in a book that unfolds over 7 chapters.

So, anyway, I still have to answer my aunt’s questions, so here we go.

First of all, regarding my grandmother’s real official name. Is it Rosanna?

My answer is to look back in Mama Rosie’s family tree to, Rosanna McCrea, born on 12/8/1838 in County Cavanaugh, Ireland.  Three guesses on why she’d leave Ireland and be in the US and married before her 20th birthday and the first two aren't "famine." 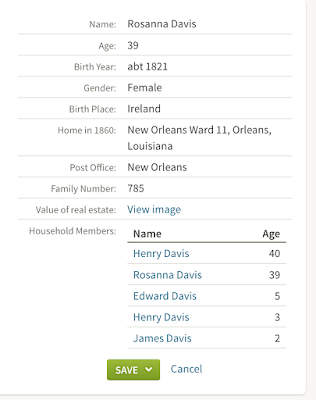 Rosanna marries fellow Irish refugee/immigrant Henry Davis in New Orleans, gives birth to Mama Rosie’s grandfather James Bernard Davis in 1858 and in dies in New Orleans on 1/29/1896 and is buried in Saint Joseph Cemetery #1 in New Orleans. I have found records calling the wife of Henry Davis “Rosanna McCray.” I can’t find Rosanna’s parents but I’m admittedly not connected to Irish sources online.

In every official mention of Mama Rosie (census, marriage to Papa Jerry) her name is Rosanna, just like her grandmother.

The next question goes back to Achilles Jean Soldani, son of “Jean Salami” and Clementine Mutt or Moti. Family lore has it that both of Achilles’ parents were from Sicily and drowned on a boat.

I can confirm that they each died in New Orleans but I cannot find their actual death certificates which contain all the juicy stuff like how they died and where they were born.

Jean Goldani dies in New Orleans in 1868 (unless he is the other Jean Soldani the pastry chef who runs away to Missouri) and Christine/Clementine Moti dies in 1869. 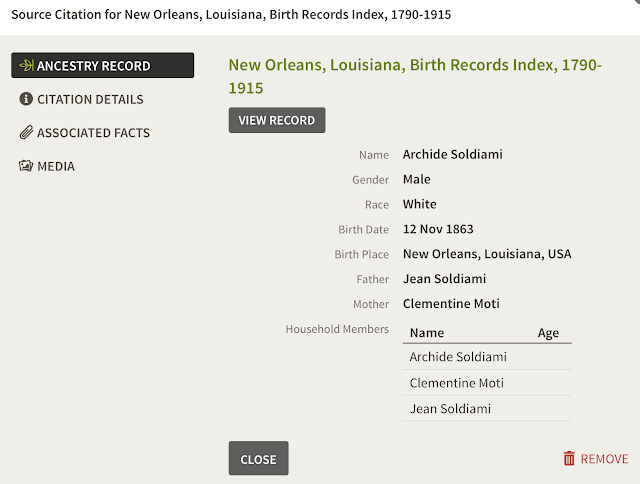 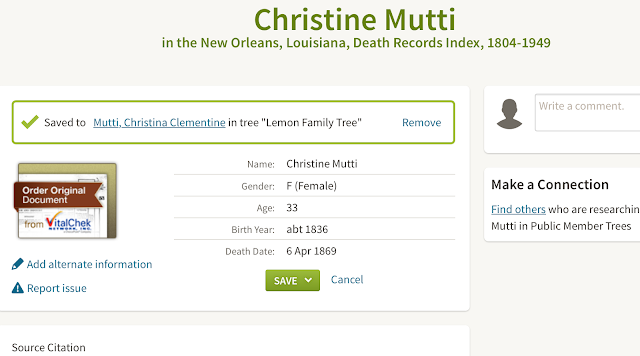 I know for sure that Achille lived at St. Mary’s orphanage (I found him on their roll, god bless the internet!!!) and ends up on an orphan train but I cannot confirm that he was an orphan because Jean Soldani either is dead in 1868 or is the 50-year-old who pops up in Missouri in 1870.

I found a passport application from Anthony G. Soldani who went to Oklahoma with the Osage – perhaps on an orphan train like the one that took Achilles Jean Soldani to his destiny in Avoyelles Parrish. Anthony G. Soldani may or may not be related to all of us but then again, his passport application lists his father as “Jean Soldani” born in France.  Not Sicily. Hmm.

My dad pushes back at this information, wondering why Achilles and his descendants looked Sicilian.

Ancestry.com shows that Christine/Clementine Mutti/Moti was born in Sicily, but I lose her there. I think for an extra $15 I could chase this lead but I'm already going as fast as I can before my free trial expires.

Here is why I officially doubt Jean/Giovanni is the person I find online (Johann Soldani) who was born in Alsace and ends up dying in Missouri.

Also, we have no marriage documents for Giovanni and Clementine, which makes me wonder if they were either married before they came to the US (which is why I have no church documents) or lived in a civil marriage arrangement unable to afford a ceremony.  I imagine that if they met in New Orleans, they came together as quickly as two “paesanos” from Sicily and didn’t foresee that they would die young and leave their small children to the mercies of the charities Catholic Church.

If they hadn’t have died, Achille Soldani would not have been sent on an orphan train with the world SOLDANI tied around him with a string.  Archille wouldn’t have ended up living with the brother-in-law of his future wife, Ella Mae English.

I’m going to keep pushing this to find the death certificates for Jean Goldani and Christine Moti so we can see what is listed as their places of birth, their parents, and the causes of their deaths.  All and all, they don’t seem to have died on their way to the US, but that story probably has roots in a grain of truth that I still haven’t found.

Until then, I’m going back to the treasure I found today, to the ancestor I want you all to meet, the one whose life is so perfectly crazy and historically accurate but not normal that it calls me back.

I can’t keep writing this for you, I have to go back and keep researching.
My grief is bearing fruit, and that alone makes it bearable. 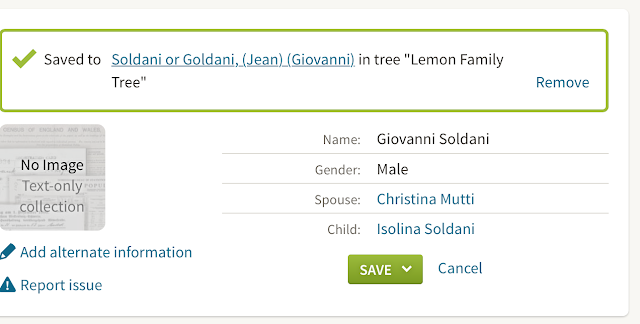