On the morning of the last lecture of the express summer school semester I walk into a very cold classroom. Mr. D* is already there, as are a few other students.

I am not late, but I am also not particularly early, having taken a thoughtful sunrise walk along a lake and meditating on the mist hovering indecisively between visible and gone.

I give Mr. D* chocolate chip cookies and a Dr. Pepper, then set up the projector, turn on the computer and open today's lecture.
A
This course could've ended in 1865, but that isn't a good ending point for the first half of American history -- how could I not cover the 13th, 14th and 15th Amendments? This course could've end in 1877 with the end of Reconstruction, but that is incredibly unsatisfying, like the end of the movie made about the first half of the last Harry Potter book.  Dark times.

I bring the students to 1898 and the Spanish American War because I want to leave students (1) questioning the media and (2) aware of the reality that many empires have risen and shrunk over the last 3000 years. 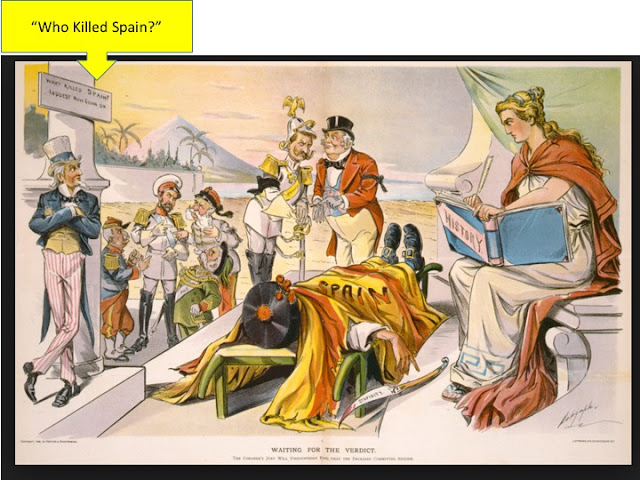 I hope they will become more engaged in what is going on today and place current events in the larger multi-century context.

A woman can hope.

Once the classroom is set up I head up to my office. It isn't official policy to check in or clock in, but I feel like I have to be seen by the staff in order to consider having been here today.

I go up there and off to my office and hanging on my office door is bag filled with food.  Hooray, Mr. D* will not have to subsist on cookies! There is a sandwich, yogurt, fruit and an unsigned note -- enough to more than sustain someone; enough to make someone feel stronger.

I take a picture of the bag of food surrounded by statues of yoga frogs who are very happy to witness this act of charity. 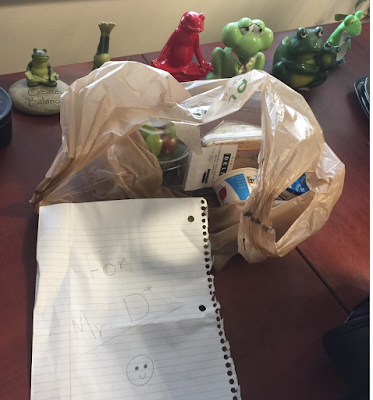 I don't race back down to the classroom, it's too cold down there and I'm in a skirt and heels because this is the last lecture and the last time I have to dress like grown up until late August.

Lecture goes well.  Yellow journalism is salacious and engaging by nature, so the whole topic is easier and more relevant than what I had to cover weeks ago -- "Jamestown grew tobacco, a labor intensive crop, but where were the laborers? -- hey, what are you doing over there? write this down!"

A mentor of mine taught me to discern between "students" and "attendees" and I still thank him for that clarification. I can't even really get this but it feels like some students don't come to my class to learn, they want credit, they want points, but they don't want to wrestle with what is important about Yalta or the Battle of New Orleans. At this point in the semester I just bless their hearts and keep teaching the ones who are deeply engaged.

When I finish lecture in the first class, no one gets up.

No joke. I'm like "Class is over, that's all the history you're getting, I ethically must stop, I will NOT give you WW1, GO!."

They sat and laughed and I'm like "This isn't Dead Pool! There isn't something after the credits! Go!" and slowly they left, one by one, Mr. D* and the rest of them, off to type up their notes and study for their final exam.

Before the end of my time on campus I find myself staring back at the picture I took of the note, and all the sudden I see a clue in the picture and I think - I hope - I know who it could be.  And if it is who I think it is, I might cry a little.  Can you see it too?