A quick search online for “when did World War 3 start” leads to over a million hits. I follow the first one.

It starts: “WW3 broke out in Somalia in 1991” and I click away because that would be too obvious, too easy. And too recent.

I want the answer to be before 1991, and I live in a world where I get to knit facts together however I like. Maybe into a scarf, maybe into a pussy hat with green cat eyes and long lashes.

There are so many facts out there to choose from swirling around and swarming and growing, why should I even read things I don’t agree with? Why should anyone?

Maybe WW3 started in 1979 with the Iran Hostage Crisis? Maybe it started with the failure of the US forces to rescue the hostages from Iran (search: Operation Eagle Claw) during the early stages of the 1980 campaign which lead to Reagan’s actual slogan about making America great again.
Iran miraculously freed the hostages so they would land in Germany with Hollywood timing, just as Reagan was being inaugurated.  I remember.  We watched it live. We cheered.

Things were awesome, we were Winning.


And then came the proxy wars of the 1980s.  Iran invaded Iraq, or Iraq invaded Iran.

Either way, we sold war materiel to both. (search: Iran-Contra Scandal). 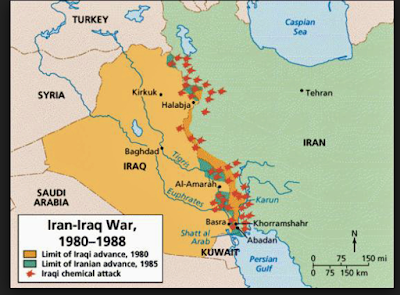 Then the Soviet Union invaded Afghanistan and we supported and armed anti-Soviet forces who would later, well, you’ll see.

If you don’t already know this is leading to Osama bin Laden, I hate to spoil it for you.

Meanwhile, east of Iraq there were continuing problems in the Palestine-Israel-Syria-Lebanon-Jordan zone, which I shall call Phoenicia because I found a map with that on it and so it’s true.

US sent troops to Beirut as part of a larger UN mission to bring peace in Civil War and were attacked by the largest non-nuclear bomb recorded. 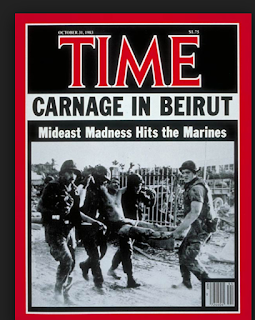 In response Reagan either sent 100,000 more troops or pulled all our troops  out.
Either way there was no peace in the region, keep up, OK?

In 1989 while WW3 broke out in Europe (see earlier chapter), the Iran-Iraq war ended with a stalemate and both nations more militarized than they had been a decade before. As Iran found her stability in the waves that rocked the borders of the crumbling Soviet empire, Saddam Hussein invaded Kuwait.


Now listen y'all.  No one had to do anything. Kuwait isn’t that big. Ask people to find it on a map and don’t point at the Korean peninsula first and say, “THIS ISN’T KUWAIT” and I bet they will point there confidently.

We couldn't just let Saddam Hussein have Kuwait because back when Hitler spread no one stopped HIM and then BOOM came WW2, so THIS TIME in an effort to keep peace and prevent WW3, the whole world (at least the ones we asked and listened to, the rich countries, the ones that matter) decided it was more important to push Iraq out of Kuwait than appease it.

The UN gave Saddam Hussein a deadline to pull out of Kuwait; while the weeks counted down over a half million troops from the largest alliance since WW2 lined up in Saudi Arabia to protect her from Iraq spreading there TOO since Iraq was getting all spready these days.

That was called Desert Shield.
I watched on TV.
The troops looked thirsty.

On the home front, we tied yellow ribbons around trees and wondered what the hell was coming next.