This story is set in October 2015.  Today, January 30, marks one year since TiaLourdes passed on, and it is also possibly he very last night for other things, but I will tell you  about those things  later, after we get past the Cuba parts of the story.

As I finish this story, I get the feeling that this will be my last trip to Cuba that I can tell my Abuelo about.

It's OK He had his Cuba before me, and I will have my Cuba after him. That's just the way it worked out.

I'm too thankful to have him to complain about a thing. No matter how I think about it I keep coming back to the same place, and it is this. There was no way he could have imagined when he left in 1960 he just would never come back. No way.  Just like I can't imagine writing stories and not sharing them with him. No way.

After breakfast Mom and I have about an hour until checkout so we decide to do something wild and unexpected and take a walk down the street in front of the Hotel Jagua.   We walk down a sidewalk that passes in front of short mid-century huge bayfront houses most of whom were have been turned into state-run hotels.Mom points out which house belonged to her school friends and we tiptoe around and weave in between places we weren't sure we were supposed to go but went away.

Workers were just arriving to their positions at the spas and information desks and those who noticed us just nodded buenos dias and went back to whatever they were doing.

Men on bikes, grown men, follow us on the deserted sidewalk and callout kind things about our appearance.

I throw them a peace sign over my shoulder and we continue to walk, giggling, arms linked, giddy to just be in Cuba together, breathing this salty air here, together, today.

We turn around and walk down the opposite side of the road and I see a house with a small but conspicuous decal signaling it is the home of the president of the local the CDR - the Comite de Defensa de la Revolucion and stop to take a picture.

Just then my iphone signals it is full, no more pictures.

Then men on bikes that had been following us have disappeared, the street seems empty.

We keep walking and go across the hotel parking lot, past pretty cars and lush gardens and posh cars from all over the world and revisit Palacio Valle.

Two workers are perched precariously on the stairs, painting them a glossy mossy green.

We smile and greet them and they let us by but we pass too close to the wet paint and Tita gets a smudge of paint on her perfect black purse, but that doesn't matter because we are here for the view and clouds and the peace and to just be here together.

Once we get upstairs we find that we are thirsty and hot. There is nothing to drink, and almost no shade, so we quickly find our way back downstairs and head to the hotel to pack. 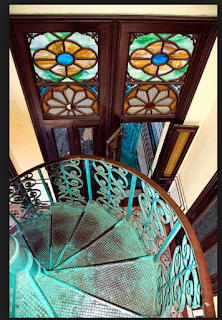 But this is Cuba and things don't go as we expected. Turns out that relatives had been looking for us, waiting for us at the hotel. No way.  That never happens in America.

We leave them in the lobby and go upstairs to finish packing and figure out what to do.

It's noon. We want to visit TiaLourdes and then be at Cienfuegos  airport for 4pm.  There is no other time or place to address this, so we sit down at the hotel Jagua for a quick lunch (which ends up costing $130 for three sandwiches and 4 drinks, I can't make this up) so Tita and figure out why they are there.

They want a favor, but it isn't one we can do.

They had to ask, I can understand that, but nope. No way, and don't even ask me what it was.

After lunch the driver is waiting for us at the hotel and 6 of us pile into a compact Soviet-era white car that has only two working doors.  This was my nightmare on my first trip to Cuba, but here I am, crowded in a non-airconditioned car with people who used to be strangers and now were my family, racing along the stretch of street where my Abuelo and Great Grandfather no doubt raced cars in their youth.

We pass the sign that says "Cienfuegos es la ciudad que was me gusta a mi!" 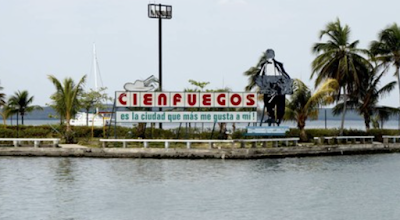 I lean my head out the out the window and notice a car full of men going exactly our same speed, looking into our car window, staring as though they never saw a person that looked like me before.  Maybe they knew our driver and were being funny, but if that was so, our driver didn't mention a word.  I stared back and we kept going the same speed until our car turned towards the Prado, towards TiaLourdes house.

It stopped in front of the colonial house, blocking a main line of bus-car-truck-motorcycle-horse traffic, just long enough for us all to hop out, take deep breaths and get ready to say our goodbyes.

Email ThisBlogThis!Share to TwitterShare to FacebookShare to Pinterest
Labels: Cubanitas, My Last Trip to Cuba, TreasureHunt