Tuesday morning goes as normal, only instead of driving to campus I come back home because we have appointments to go to, ones that are scheduled just exactly so that if I drove to campus after dropping Zoe at school I would’ve had to turn right around anyway, then go back, then leave again. I’m sure there would be no history emergencies that couldn’t wait until tomorrow’s office hours.
But first, we cook pigs in pretzels, a twist on pigs on blankets which requires rolling tiny ugly sausages in piece of pizza dough, mixing baking soda with boiling water, boiling the dough balls (who thought of this? Who?) then covering them with egg wash and salt and baking them.
Actually, instead of cooking we prepare to cook by watching the instructional video repeatedly, then watching videos of other people cooking and telling us hints (let the dough come to room temperature, cook the balls longer than they say) which we will completely ignore.
Then we facetime my parents so they can watch us cook. I didn’t ask them if they wanted this, I just hoisted it upon them and they rolled with it, watching us cut the pieces of dough and happily roll the ugly lumpy teeny sausage.  I mentioned to my dad that we will probably add “making a cooking show” as an elective so that we could pretzelitize others about the joys of all this whatever. He understands the pun but Zack doesn’t so I try to explain proselytize but while I’m trying my Dad and Zack start a side conversation about whether the word has anything to do with prostitutes or prostates and then they both decide to stay away from anything with the word prost in it. See, homeschool has moments. 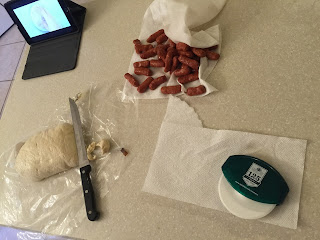 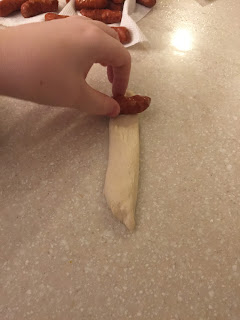 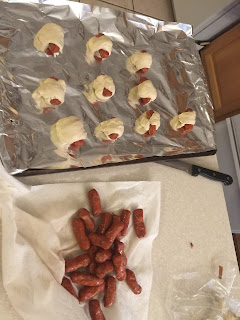 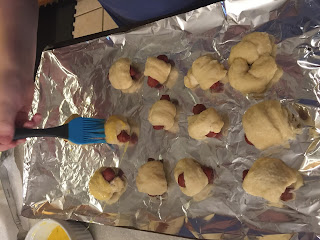 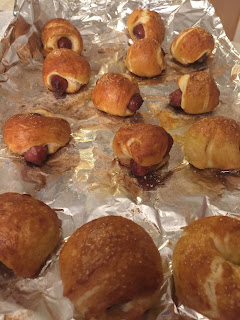 The whole cooking process goes incredibly smoothly, and within minutes we load egg-washed and delicately salted dough blobs into the oven.  15 minutes is way too long to make small talk with my saintly parents, so I dismiss them from facetime and clean the kitchen while we wait.
They come out beautiful.
Zack tries a bite. Yum.
I try a bite, one that doesn’t involve those ugly tiny yucky scary sausages, and ok, wow, I’m impressed. Yay I’m a pretzelmaker.
For about thirty seconds we both admire the food and take pictures and pick at the food and then he says he doesn’t really like pigs in pretzels, and I agree that this isn’t something I would normally think of as food, and we laugh at ourselves and take a break from school for a few minutes.
In the window of time before we have to go places I start to write this story up but then he asks if maybe it’s time to make the sushi.
Before I can write too much I agree to cook more.
Writing takes up my brain, and getting these words to come out my fingers involves shutting out everything around me, but I haven’t fallen too deep into it the writing zone that I can’t easily walk away.
We watch the banana Nutella sushi video and then realize we have no Nutella (not an accident, I don’t keep it around, and there’s no cookie butter either so don’t bother looking) and decide that peanut butter is a fine substitute for Nutella.
Minutes later the banana is stripped of his peel, neatly coated in peanut butter, rolled in rice krispies and sliced like a sushi roll. It is gorgeous and we are proud. 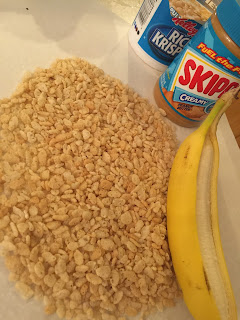 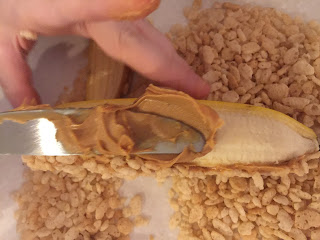 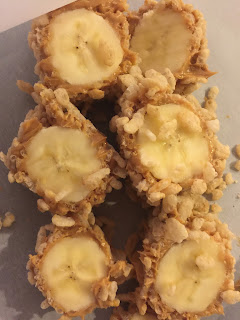 Zack tries a piece. I try a piece. I don’t eat banana and peanut butter together ever, and I liked it.  Not enough to eat two pieces, but enough.
It’s so rich and creamy that we can’t finish it, and end up tossing pieces to the dog in reward for her alternately rolling over and leaping several feet off the ground.
When the banana sushi was gone we dispersed and I tried to write more, I swear I got several paragraphs into this story when I looked up from my mac screen and he was standing right next to me with a wistful look.
Yes?
Mom?
Yes?
I’m starving. Can we get Subway?
Yes. I look back at the screen, turning back into my head but his voice pulls me out, asking questions about this and that.
I answer perfectly, demonstrating I know what he orders at Subway and also that I care about the other things he is telling me but then after being on my best behavior for so long impatience rolls up and I beg for a few minutes to finish writing something before we have to leave the house. He understands and retreats to his room.
Sentence after sentence of this story come together, flying out of a wordless place in my head right through my fingers into a big clean word.doc.
Then, just as I am about to put this and that together and make a point, he waves to get my attention from his door. I take my headphones out.
One last thing, he asks.
What?, I respond in a tone that clearly says he shouldn’t ask anything right now.
Can I have a football?
A? What?
A football?
All the sudden I’m speechless and almost angry.
I have spent all this time watching videos and cooking (and cleaning) and we still have more cooking and fun to do but before we even finish all that here he is, is asking for the next thing.
NO. No, I’m not buying you anything. Please just let me be.
I try to go back to writing but I hear something like him screaming like he’s being stabbed so I think maybe I should check.  He is in his bed with the blanket over his head.
What is it? Why do you want a football? And why are you crying?
He pulls the blanket down. Mom, I said footlong.  A footLONG from SUBWAY because that was what we were talking about. And I’m laughing at you because you can’t hear and why would I ask for a football? How random is that?

Completely random, I agree, and then he shows me a really cool video about turning two Dr. Pepper cans and a candle into an itty bitty homemade popcorn popper and we begin to plot our next project.
on October 11, 2016

Email ThisBlogThis!Share to TwitterShare to FacebookShare to Pinterest
Labels: Dancing Awkwardly through Motherhood, domestic goddess, Fall 2016, Pieces of My Heart Diced Up and Folded into a Story, Pretzelitized
Newer Post Older Post Home