My Sunday was full enough without rolling dipping string cheese in hot Cheetos and frying them.  I get everything done on my list and make a list of the things I have to finish before 9am the next morning.  Zack is busy in his room doing Zack things, going on missions and submitting assessments and whatever else is he has going on.
The hot Cheeto thing didn’t come up again until late Monday when I asked if he needed anything from my quick run to Publix.
He said no.
I reminded him about we were going to make the hot Cheetos cheese thingys and he shrugged it off because he wasn’t sure he wanted to make it, he was still thinking…. Could he please show me a video?
For some reason, I gave in, completely stopped my momentum, I sat down and watched the video.
Perky background music set off shiny forks flashing around making “Three Ingredient Recipes.”
A few seconds into the video I have to break it to Zack this video is a sham, “cookie dough is NOT an ingredient” and he gets what I mean. Eggs are an ingredient.  Milk is an ingredient. We snicker together at how ridiculous it is to call cookie dough an ingredient but are stuck for a better word.
The video continues the recipe and when the second ingredient is announced I throw my hands up in fake exasperation. “Oreos are not an ingredient!”
Maybe they are, I could be wrong.
Who puts oreos and cookie dough together? who? Geniuses, I guess.
I couldn't look away.
We watch, mesmerized, as a hand lays out neat rows of Oreos on top of a flat layer of cookie dough and then TA-DA pours brownie batter over the entire thing.
As it happens we shout out BROWNIE MIX is not an ingredient EITHER together and laugh but not so hard that we shake the screen and miss a vicarious bite.
He then shows me a video where someone is  making pizza dip that looks like a pepperoni pizza, then another video on how to making bowls out of churros by piping churro dough around the bases of overturned muffin tins. This is way out of my league, and also, churros meant to be straight not all curly like bowls, so I just can’t.
Ten minutes later Zack tells me he knows I need to go, but maybe can he just show me this other thing and I say yes, yes, of course yes.
Two hours later I’m still in there and in no hurry to go anywhere.
We watch videos on deep frying candy bars. Apparently the trick is to use pancake batter.  Maybe you knew this, maybe this is normal in your world, but my mind is blown. Pow.
We watch someone mix flaming hot Cheetos with marshmallows and make something along the lines of the horrible step-sister to rice crispy treats that is lumpy and orange and so vomit inspiring that they added a caption I saw in no other video: “This tastes better than it looks!” Doubt it. Pass.
We learn how that ice cream bread is a thing (pint of ice cream, flour, sprinkles, bake, you can try it but for me I’m thinking no thank you!)  and that s’mores can be fried but first you need to freeze them.
We learn that peanut butter stuffed skillet cookie is a thing, and that the trick to making neat banana Nutella sushi is to smooth the chocolate on just one ¼ at a time, then rolling the banana log in rice crispy treats.
We watch a whole series about what can and cannot be made in a waffle iron, then get up and try to make tater tots in the waffle iron. 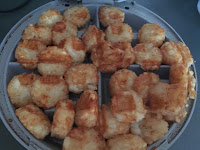 Score.
After that I head out to the grocery and come back with pizza dough and brownie mix and cookie dough and crazy things like that.