Our Last Trip To Cuba #8: Decorated in Pope

Mom and I are greeted by Olguita, her sister Cari, her other sister, Cuci, and – because this is a small town on an isolated island – the cabdriver’s daughter.

We walk through the front hall towards the long main hall to the room where Tialourdes is napping.
I have only met her three times before; each time she was impeccably, lovingly, old school formal.

She would not want me to be looking at her like this, white hair splayed on a flat pillow, skin paper thin with rips of sores bursting through.   Instead I stared at the small brown rosary on her pillow, and then turned my attention to a faded print tacked on the front of an antique wardrobe.
I pulled my phone out an took this picture for you: 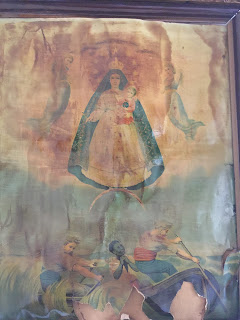 I could tell by her yellow dress and the way she was floating over the earth that she was Our Lady of Charity. I didn’t know what the guys on the bottom were doing, and I decided I would decode that later.  I step out of the room so that they can get TiaLourdes dressed and set up in her chair.
I take a few more pictures of the house for you. It has not changed a bit since I first saw it in 2013, and it didn’t look like it had been updated since before the Revolution, or more specifically, when my Great-grandfather – my Abuelo’s father, TiaLourdes’ father – suddenly died in 1957.

The Revolution came to Cienfuegos early (September 5, 1957) bringing with it the closing of stores, the embargo, and shortages of consumer and household goods (including coffee and sugar, but that’s another story, right?) 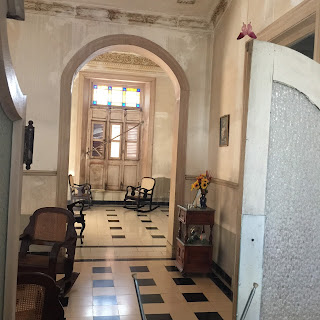 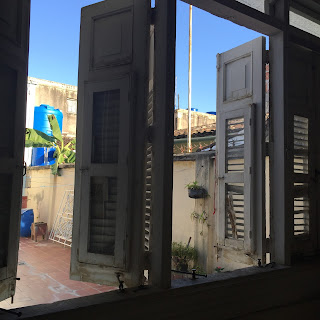 I take more and more pictures, and see a pattern. This house is decorated in posters of Popes, pictures of Popes and even specially signed blessings from Popes. This house is decorated in Catholic, an in-your-face defiant anti-communist Catholicism. I get it more than I ever got it before. TiaLourdes is a badass, a demonstration of faith, of charity, of frugality and kindness. 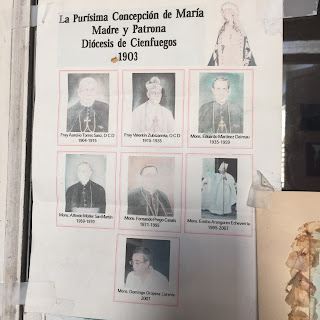 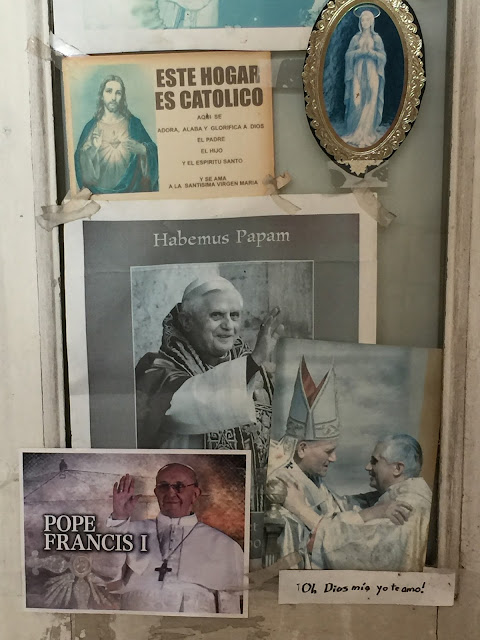 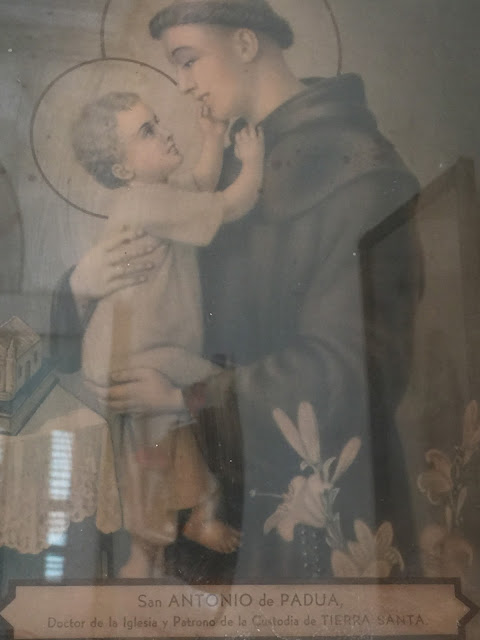 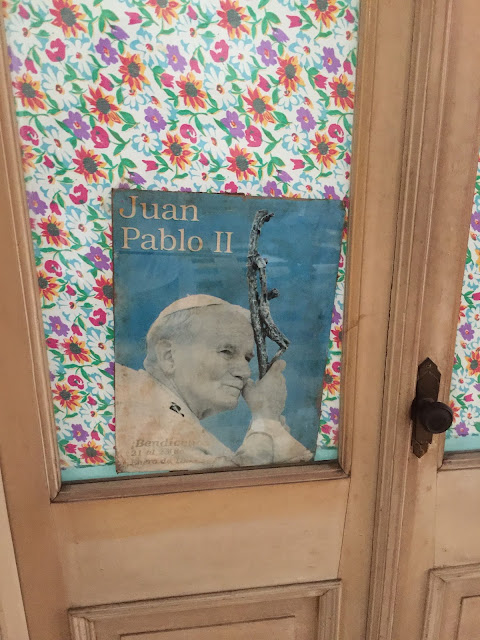 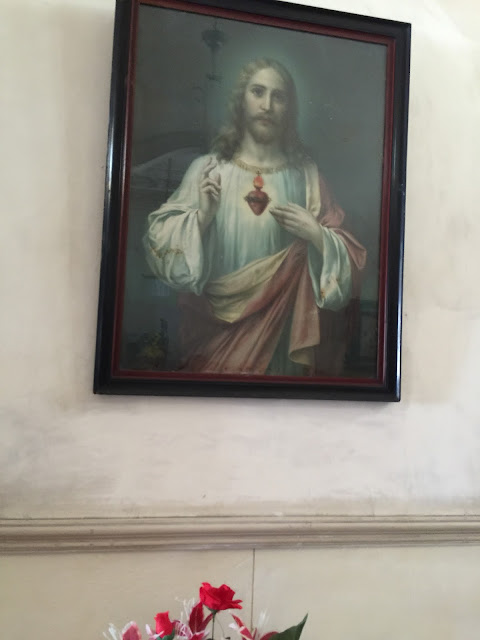 My thoughts don’t come out as eloquently, as I finish my tour and join my Mom and blurt out, "This house is decorated in Pope."
She is sitting at TiaLourdes feet and looks at me with all the kindness a person could muster towards such a random statement. I nod my head and settle down and take these pictures for you. 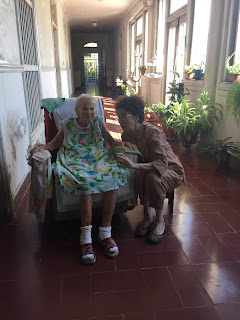 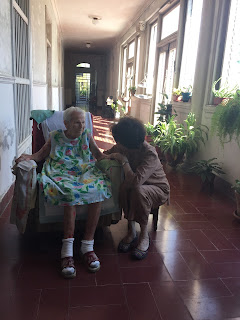 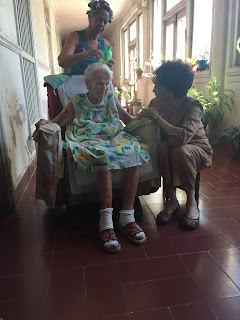 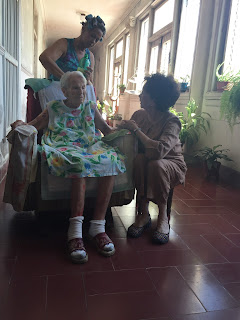 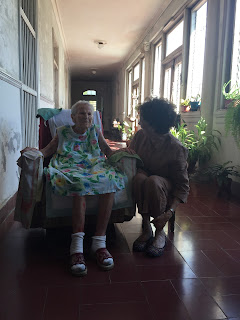 Here’s the thing you didn’t get in the pictures.  Look at where I was.
Low, very low. Almost like I was sitting on the floor. Because I was sitting on the floor.
My TiaLourdes, the lady reigned over this house for so long, would have told me to get up, get a chair, and then I would have done it and that would have been that.
But not now. Now she smiles at me, completely accepting I am where I am doing what I am doing, like a zen master. I love her more and more every time our eyes meet and she smiles at me.
People are talking here and down there and in the other room and down the hall. Don't ask me what it was all about, I can't follow multiple conversations in Spanish unless they are from the Venezuelan show on Netflix about Pablo Escobar and then I peek at the captions now and then.
Soon enough – it had to have been hours later but it felt like minutes,  Mom and I were both suddenly thirsty and hungry and felt like we had traversed decades and continents instead of just 150 miles.
Our cabdriver came back to pick us up and bring us across the part of Cienfuegos that looks like the French Quarter, and off a few blocks towards the part of Cienfuegos that looks like the older beachy parts Miami Beach or St Augustine.
With any luck we would be checked into our room and sitting outside by the bay before sunset.
Cuba, of course, isn't know for luck.
on October 16, 2016

Email ThisBlogThis!Share to TwitterShare to FacebookShare to Pinterest
Labels: 5 Days in Cuba, BrightNewCuba, Cubanitas, My Last Trip to Cuba, No Island is an Island, Perpetually Cursed with a HUGE Imagination
Newer Post Older Post Home