Our Last Trip to Cuba #13 Have you been to Moscow?

Once we found our way to the top floor of Hotel L'Union, I took pictures for you and pretended to not be thirsty for wine.

Here are the pictures of Cienfuegos (October 2015) and lets fast forward to the part where the wine arrived. 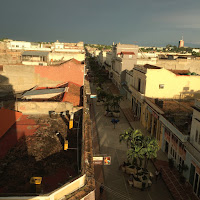 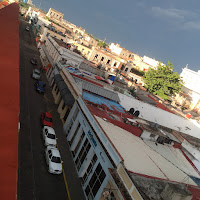 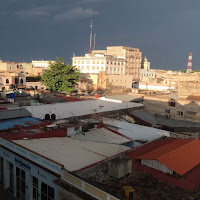 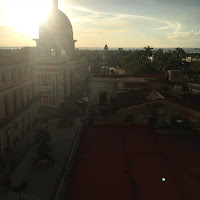 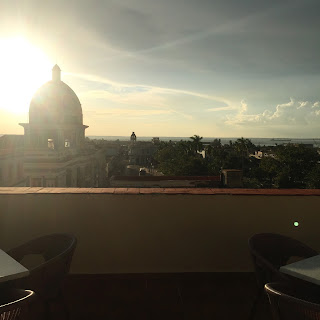 After a few sips of wine I excused myself to the bathroom, and since I've been to this hotel more often that I've been to the Cracker Barrel in my hometown of Tallahassee, I dash off alone.

As I walk back through the mostly empty rooftop deck towards our table I spy a guest standing at our table with his hand possessively on the back of my empty chair. 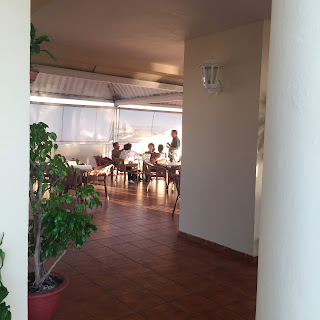 I'm not scared of him, I sit back and say hello.

By this time he has met everyone at the table and knows who is from here and who is visiting from el Norte.

He starts asking me who I am and what do I think of his city and I turn the tables on him and ask him who HE is and he says he is a colonel.

I shake my head in disbelief and he shakes a finger in the air and fumbles for a word and then points to himself and says GENERAL.

While he is talking my mom is laughing and whispering to me that she can't take me ANYWHERE and I see my tiny wine glass is empty and add a little wee bit more.

My new friend asks me to ask him anything and I mostly repeat back to him what he said. You're a Cuban General. And you're sitting here with me, a writer.  And I'm going to write everything you say.

He nods his understanding. Yes! What do you want to know?

Can we  take a picture? He says yes of course.

I decide he is equal parts drunk and crazy but I go along with his game. "Seriously? Have you been to Moscow?"

He takes the last gulp  his clear drink and gets the waiter's attention. Mom orders another bottle of wine, he orders himself another drink.

Yes, he has been to Moscow, what did I want to know?

I took a deep breath and searched high and low in my head and nope. Nothing came up.  Really.

What could I ask? Was it cold? Did you talk about America much? Did the Soviets make you feel lesser than other satellite nations or were you treated like tropical Cold War prize?  Do you miss the Russians? Are you stuck on this island or can you travel? Why are you in this hotel bar when it's for foreigners?

These questions were too big to ask and even if he could've answered him I didn't really want to hang out with him to hear the answers.

Oh, and he was talking on and on about how I could ask him anything and he spelled his name repeatedly -- it has an R in it, a LOUD R - but I didn't write it down. See, I remembered his name anyway. Yay.

Meanwhile his phone kept going off and he kept declining calls.  I asked if it was his wife calling and he got all grumpy and said yes.

He ordered ANOTHER drink but mom slipped up to the bar and asked the bartender to please serve the nice gentleman at a place other than our table and soon enough he disappeared into the Cienfuegos evening.

A strong breeze kept cutting across our table so we go up and moved to another part of  the rooftop and I took these pictures for you. 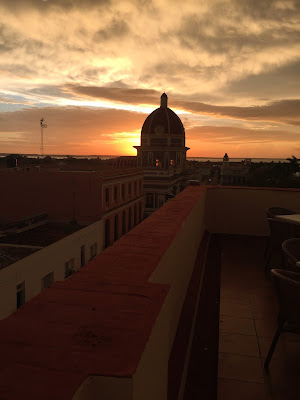 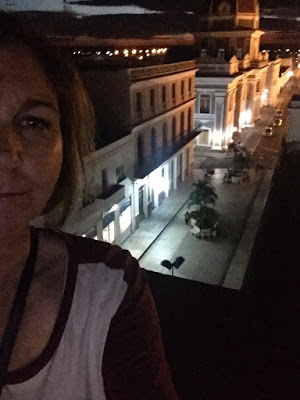 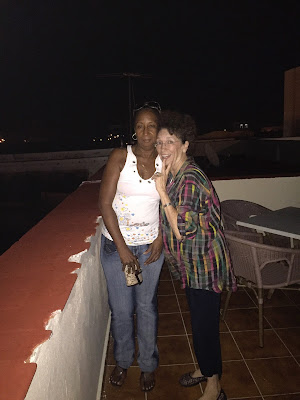 While we were taking pictures a tour group poured in and filled the deck.

From what I could over hear they were each entitled to one drink as part of their tour.   I listened to them order margaritas and cuba libres and pina coladas and talk about mountains and horses and alligators and what time a bus was coming and the more they talked the clearer it was that I was in a   completely different Cuba than they were.

And then I took an over the shoulder selfie so you could see what the tourists look like in Cuba.

Don't worry, they didn't see me.

Soon after that,  just as four tables of tourists sipped on their fruity vacation drinks, a group of young musicians assembled and played an acoustic concert.
It was breathtaking and perfect, and some of the tourists got up and danced (I didn't) and then they walked around to every table and sold CDs and I'm pretty sure my mom bought at least one. 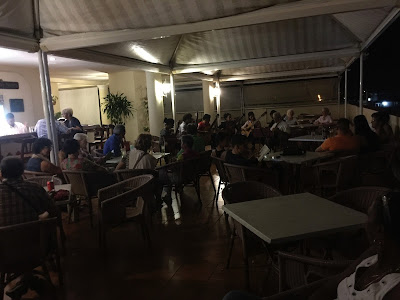 After less than an hour the musicians packed up and left, followed by the tourists who were all completely satisfied with one drink each.

We sat and talked for quite awhile on that empty roof, telling stories of cemeteries and gold necklaces and laughing until we became quite aware we were alone and it was late and time to pay the bill and get ourselves home.

But first, one last picture. Or two. 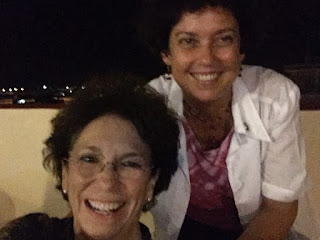 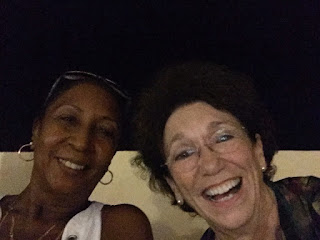 We made our way downstairs and through the empty lobby onto the dimly light empty street.

Not a single CubaTaxi sat waiting in front of the hotel.

The streets were abandoned and we were miles from our own hotel.

Email ThisBlogThis!Share to TwitterShare to FacebookShare to Pinterest
Labels: 5 Days in Cuba, BrightNewCuba, Cubanitas, Legend of the Laughing Yoga Frog, My Last Trip to Cuba, No Island is an Island
Newer Post Older Post Home