My Last Trip To Cuba #10: Our Lady of Ten Thousand Sorrows

A tall Beyonce-looking teenager dressed in a white shirt plaid (short) skirt uniform was walking towards me on the sidewalk, a long sharp umbrella tucked under her arm, pointy side facing me.
She looked me right in the eye while eating her hotdog (which was sadly plain, and I wondered if this was by choice or because of communism)  and continued to walk towards me as though we were umbrella jousting.
I stepped aside and decided to let her have the  crumbly sidewalk in front of the Liceo.
She can also have the Prado and Cienfuegos and Cuba.
Olguita and I cross the street and I catch a glimpse of the House of the Lions, the house where my great-great uncle The Spanish Captain lived, and where my great-great grandmother Maria Emilia whose middle name was something like "Our Lady of Ten Thousand Sorrows who Crossed the Sea and Shines in the Stars" lived when she came to Colonial Cuba from Spain.
One day I’d like to peek inside of that collapsing mansion, but not yet.
I’m suddenly very aware of being thirsty, of wearing long sleeves and jeans in the tropical sun.
Three more steps and we are in front of TiaLourdes' huge Pope-decorated door. I guestimate TiaLourdes' house was built in the 1880s for many reasons: it resides on a street that was clearly built during the late Spanish colonial era in between the House of Lions and the Obispado/ Bishop’s residence and it has the hallmark plain exterior architecture and maze of interior rooms set around a courtyard. Sometime before the 1930s someone split a majestic home into two, laying a wall in the interior courtyard and creating two C-chaped homes instead of one classical square, more space for a blooming middle class during the Republic of Cuba. But I digress.
We return empty handed (I still don’t know what Olguita went out to buy, but the Buddhas were all too big, and I’m not in the market for statues of Italian guys) and new people are waiting for us. 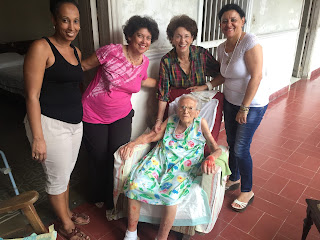 A white jacketed lady with a big smile greets me warmly – I remember her and ask about her daughter, the one studying to become a history professor.
A circle forms again, more talk and small talk and then it gets better because Barbarita arrived.
I could tell you that she liked the gifts we brought her, but of course she did, she’s 5 and they were shiny and fashionable and foreign. I could tell you lots of things about the next 20 minutes but anyone who’s sat in a circle of people in an unairconditioned long hallway watching any child play with toys knows exactly how it went.


It was interesting until it wasn’t, until this person went to the kitchen, and then another person too, and these two people here were having a serious conversation, and then the other person went to the window to look for someone who might be coming by to pick them up.
That left me and Barbarita, and since she only sees me once a year – or less – it was time to play.
With all the adults abandoning us, Barbarita, who, excuse me, now wants to be called Barbie, looks at me for entertainment.  My apple watch beeps that it’s time to move, so I get us moving.
My Spanish isn’t good enough to ask her to play hide and seek so I basically tell her to sit and count and she immediately knows what’s up.
She counts loudly to 20 while I sneak around the house with impunity at last, hoping to find some hidden treasure.