Every semester I give my students a series of "pretests" where I require that they answer a whole ton of questions that come at them with game-show like speed.
I don't expect most of my students to get the questions right, especially when most of them associate history class with multiple choice quizzes and crossword puzzles and don't feel especially confident in a college history class.
The grade for the pretests in my class is based on completion, not correctness.  If my students don't know an answer, they need to dig deep and write SOMETHING (anything except IDK, IDGAF, etc) anyway because creativity is a skill worth honing. And also, requiring answers - even crazy ones - makes grading THAT much more fun for me, and when I'm having fun everyone else has fun.
For example, one of my favorite questions to ask is "What two countries fought in the Spanish American War?" Every student who gets it wrong (a strong 1/3, every time) must think that history is a confusing tangled place with random names assigned to wars regardless of their participants.
I've been collecting bloopers for awhile, in case you missed it.  Here is a blurb from my first book, Marvin's Book (1st edition, 2011), explaining the roots of my 20+ year relationship with bloopers.

My freshman year at Loyola University in New Orleans, way back during Reagan’s second presidency, I took the prerequisite writing/composition class from a cheerful bearded male professor who graded our essays “thoroughly.”
On the days he returned our essays, that professor would have an index card in his hand with bloopers of grammar, logic and spelling written on it. Upon entering the classroom he would stand with his back to us, silently copying a list of our collective, anonymous mistakes onto the board.
I don’t remember if any of the mistakes were mine, but I do remember the “teachable moments” that came out of the laughter over the mistakes we made.
No finger pointing, no blaming and certainly no teasing.
In that same spirit, I began posting anonymous funny bloopers from my students’ essay exams on Facebook in the fall of 2009.
I know, I know, Facebook is a huge jump from the privacy of a classroom.
This is exactly how it started.
While grading exams, I came across a particularly funny incorrect answer.
To the short essay question, “Explain the Atlanta Compromise,” a student had written “How Alaska became a state.”
I put the exam down and laughed at one of the worst guesses ever.
Alaska and Atlanta clearly aren’t even the same place.
That wasn’t a “studying” mistake.
It wasn’t evidence that the student wasn’t the chippiest cookie in the cookie package. It was not a sign of the downfall of public and private education, the result of some crack in the system that I’m trying to fix. It was just a funny “slip of concentration” mistake—I see those a lot in exams, especially from students who are new to writing essay exams.
I turned the exam over to see whose it was—I knew the student, I knew he had been to every single class.
I posted his anonymous, incorrect answer as my Facebook status and let other people giggle:
“Grading exams: ‘Q: Explain the Atlanta Compromise A: How Alaska became a state.’”
Thirty people “liked” it.
The person who made the mistake immediately recognized himself and loved it.
He will never, ever, forget that the Atlanta Compromise was what critics called Booker T. Washington’s famous speech, and years later he still likes to laugh at history with me.
I posted more bloopers—just the funny ones like “WW2 started when France invaded Germany through Poland.”
And “The Neutrality Act just said we would help out everyone in any way we could.”
In an essay on Operation Mongoose a student wrote: “When JFK became president he came up with a plan to kill Sadam Hussein called Operation Mongoose. Shortly after that, he announces he is communist. This was the Cuban missile crisis.”
Looking for slips of the pen and slips of the mind and slips of stories took my favorite thing (grading) to a new level.
Students loved reading bloopers and learning from them in class.
Ex-students loved that they remembered the material. Colleagues, strangers, friends of friends passed the bloopers among themselves and smiled.
I liked that. I really liked making people think about history and laugh, and so I kept posting bloopers week after week, semester after semester.

That brings us to today.
On most recent pretest given to approximately 150 students, I asked 21 questions, including  "Name 5 non-Christian religions"  while showing this image - 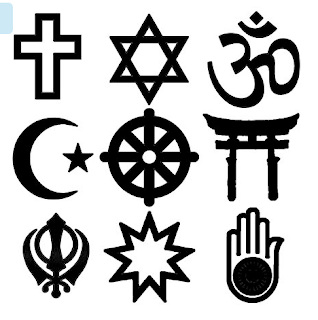