No Island is an Island: Chapter 4: Trumpeting Hardship

The rooftop bar on the 4th floor of Hotel L'Union overlooks a street, the same street I saw from the window of our brief trip through the hotel room earlier.

I looked down and saw people walking by in pairs and alone under bright nightlights that lined the street.

Over there was the church, there is that school, there is the bell -- hear it? -- and over there, see? -- there is another hotel.

Look that way, there is the bay.

I couldn't see the bay in the inky night, so it could have been a sea of dark land, unlit lit New Orleans after Katrina.

I loved it. I loved it all. Every bit of what I could see, smell, hear and taste was was delicious.

Up there, on the 4th floor under the crystal starred sky it really hit me.

I was in Cuba.

Seriously. I was in Cuba.

Cuba has been a shadow companion my entire life. Cuba was the subject of my writing, my dissertation, my general interest in life.  In 1998 I finished my dissertation on Cuban Bankers with an epilogue excitedly discussing Pope John Paul's historic visit to Cuba that year, but I didn't write a word about going to Cuba myself.

I knew better than to think or wish to go to Cuba, at least not until there were sweeping changes of possibility and attitude.

Bernardo Benes, Cuban American philanthropist and banker, successfully negotiated with Cuba for the 1980 release of a planeload of prisoners from the Bay of Pigs fiasco who were flown to Miami and renunited with their families.  Castro-hating extremists bombed Benes's bank (the first Cuban-American owned bank in the US, for the record), threatened his family and made him a social pariah.

My Abuela left Cuba in 1961 and never saw it again before she jumped into the sky in 2007. Cuba is a place not to be visited, not to be wished for, and often a Sore Topic.  The Revolution cost my grandparents' their store, their livelihood.  For Abuelo, for Abuela, for many Cuban-Americans, this hate of Castro is personal and understandable.

After a few more (very small) glasses of red wine our evening wraps up and Mom and I hug our Cuban family good night head back down to our hotel room.

Out of habit, I try to check my email and texts on my iPhone.

Seriously, seriously, seriously. It doesn't work in Cuba, not as a phone or internet connector, not on AT&T at least.  I was ready for this, but it still feels like sudden withdrawal and I'm not sure I'm really ready to be this disconnected from Twitter and TextsFromLastNight and other chatter that fills my hands and idle mind.

Part of me wonders how I'll know the temperature or the weather without my awesome iPhone but I let that go out of my head and dissolve into the amazingly high ceiling of the room.

I get up and turn on the TV, hoping for some crazy Sabado Gigante-like variety show but expecting the worst which I guess would be no TV shows at all.

The first channel that comes on is CNN in English.

I've been out of Florida for less than 5 hours and already I miss the US so much I'm giddy with delight to feel connected to quickly and easily.

It's Piers Morgan interviewing Bill Maher, who is talking about religion. A true addict, I grab my iPhone and take a picture of the TV screen. 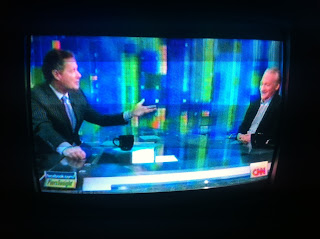 Then I change the channel and look for Univision.  Nothing.  Here I was having my biggest Saturday night ever, off across the Iron Curtain that separated Cuba and the US and nothing good to watch on TV.

Mom was ready to turn the TV off anyway, so I took a Tylenol PM and turned my iPhone into a White Noise machine to cover the growing swell of voices and music from the bar below our window.

Around 2:30 I woke up to a trumpeter (drunk?) playing outside in the street.

I notice the quiet behind it.

No ambulances, no police sirens, no guns, no yelling.

I lay quietly in bed and laughingly endure my first real hardship since landing in Cuba.