The cab drive to Hotel Jagua is short, just straight up the Paseo del Prado towards Punta Gorda and the neighborhood Mom used to live in at Playa Allegre. On our ride our driver asked how long we might be and if he should stay -- we didn't have an answer, so he took that as a sign to leave us.  Se asked the cabdriver how we could go home and he said we should have the hotel staff flag down a Cubataxi.  Sounded easy enough.

He asked where we were going and why, and the best we could explain was that I needed to see the sunset on the water. He understood.  I told him we might want to go to Palacio Valle after the sun set on the water, maybe and he looked very stern.  That isn't the right place for you two, not at night.

We took his advice, put in our purses and kept talking.

I asked if there were any women drivers in Cuba because I hadn't seen any yet. He took my question very serious. He said yes there were, and that he could name two.

Wow, two, I said and nodded seriously. By then we were almost there. 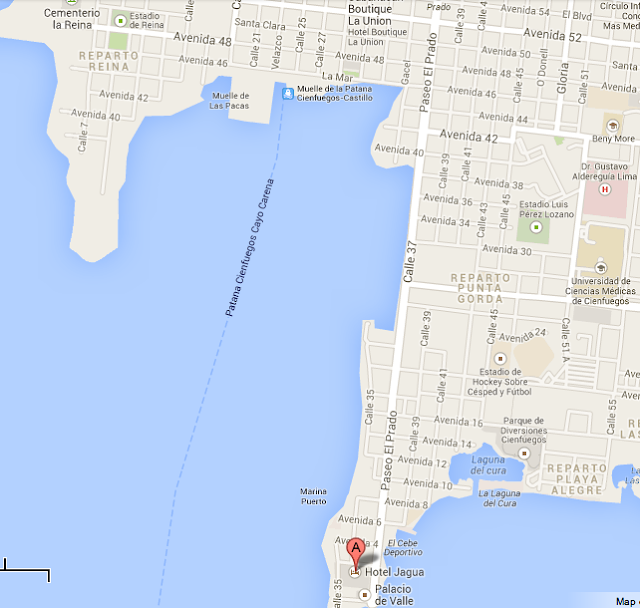 The band is playing and Mom wants me to make a video. I want to make one too, but suddenly the fresh air and the water and the whole day have made me giddy and I can't get the right camera switched on.

We order wine and before it comes I keep getting video. There are more people in the band than the audience; the only other people are an older couple. The wife is dancing with a very dark man with a thin tshirt and low slung jeans who no doubt would answer to "flaco."

They are in a different Cuba than we are.

The band plays another song, then another, and then we are the only people there.   The singer comes to our table to offer to dance with my Mom, then with me.

No. Really, thanks, but no. We are polite but it's clear, we aren't here for THAT.


He stays and talks and we take this picture. 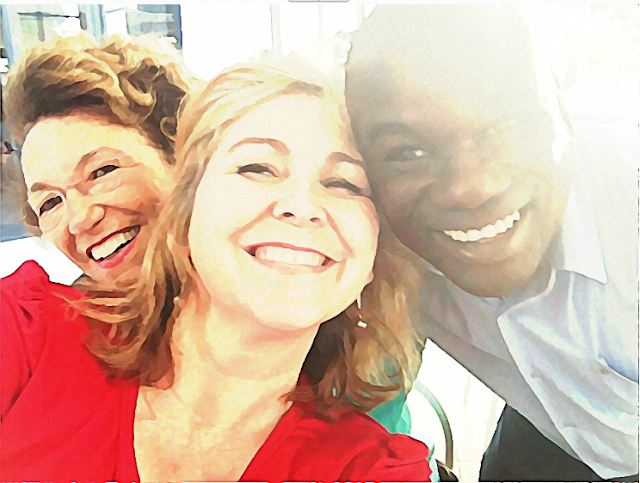 Soon enough my Mom is telling him she's from here, and he talks about wanting to come to the US and he's giving her his agent's contact info.

I'm distracted by some people who are walking by, and I can't tell you how our conversation started, but I'm sure she started it.

A sunburned woman wearing khaki shorts on top of a one piece bathing suit is talking to me. She introduces her husband, a tall portly man with a huge camera slung around his neck.  She speaks English and she's from American and they're here with something about the National Trust.  I tell her I'm not on tour, I'm in a different Cuba, one with relatives and obligations and stories that are unfolding still.

She half whispers that she wants to get Cuban cigars but that they'd been warned there was like an $800 fine for each one they brought to the US.

I shake my head. They sell cigars in the gift shop at the airport, I tell her, on the  side you wait in after passing through Cuban customs on your way off of the island.  She winces at the idea and I tell her it's not that big of a deal. She gives me her email and asks me to send her cigars if I manage to get any home.

The sun is setting quickly. The band moves so that they aren't facing the glare. One more picture and we move tables. 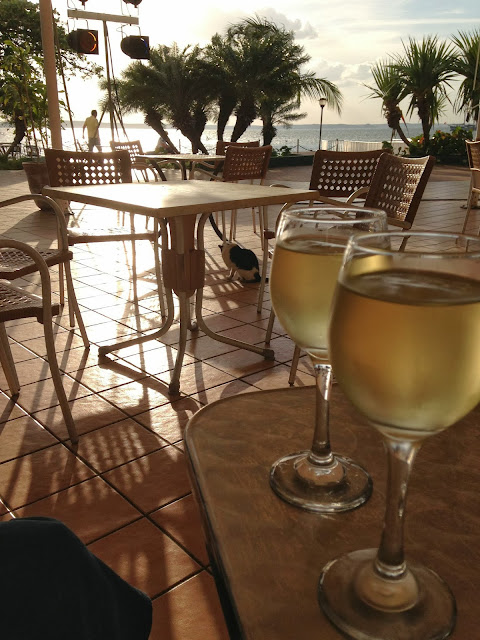 The table we move under sits near a tall flowering tree. Mom is enchanted and gets up to pick a fluffy pink flower.  I've seen it before in a photo that lives on Abuelo's wall.  She explains that their house in Playa Allegre was built around one of these trees.  " 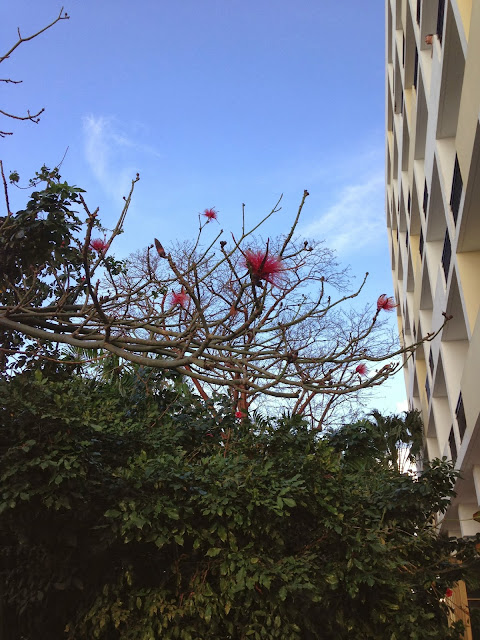 It was a rare specimen tree, known as Bella Carolina in Cuba, and English it was known as the "Shaving Brush."

I imagine a sweaty Englishman visiting Cuba on a botanical expedition and coming across this flower. Clad in trousers, suspenders and a sweat stained undershirt he proclaims that the flower of this tree looks like  shaving brush. Yes, practical, obvious. He soon leaves the island and spends the rest of his short life drinking rum in cold parlors and boring second cousins with stories that roll in circles and fade to non-ending.

My imagination continues, as it is apt to do, and envisions another man, a Latin man of arts and sciences, seeing the flower and thinking it is so beautiful, it reminds him of his lover, Carolina. He brings the bloom to her and tells her it's Bella Carolina.  She blushes and accepts it and the camera fades to black.

Mom and I take pictures with Bella Carolina. These are for Abuela, who can't see them but she can see us, she can feel us laughing here, finding this.  These are for Abuelo, so he can know that some of the things he left haven't disappeared. 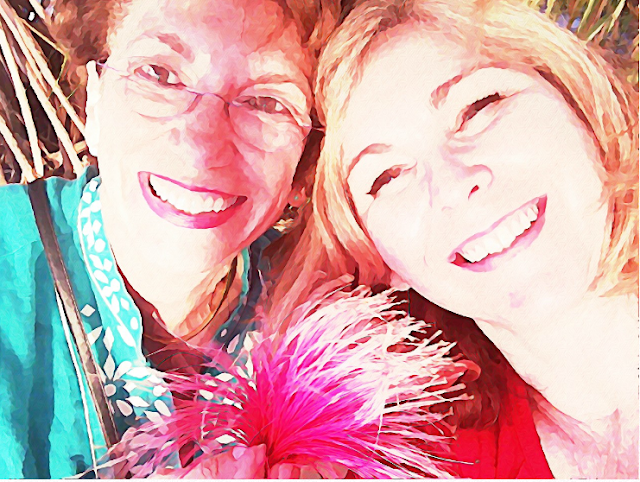 It's my idea to take the flower with us across the patio deck and towards the water.

All the sudden the sun was setting.  Mom holds up the flower and I take this picture. 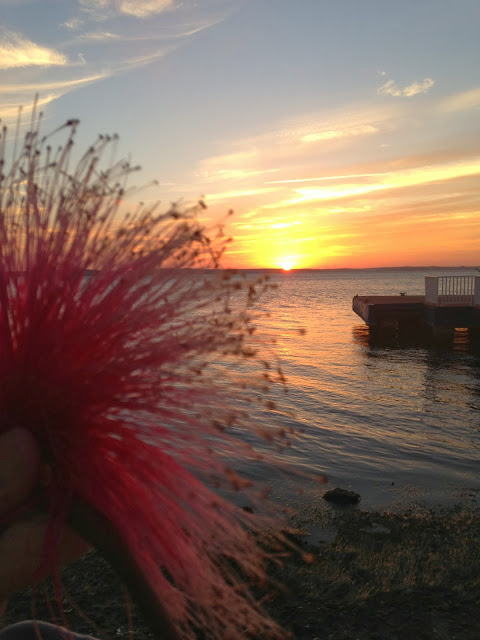 I can't believe how beautiful the air is, how clear the water is, how perfect every color is.
We are only a few dozen yards from Cienfuegos Yacht Club so I know this is the view my grandparents saw hundreds, perhaps thousands of times.
Being here and just feeling it brought closure to an invisible circle that needed sealing and healing.
The wind is blowing and I'm laughing and Mom grabs my phone and takes this picture. 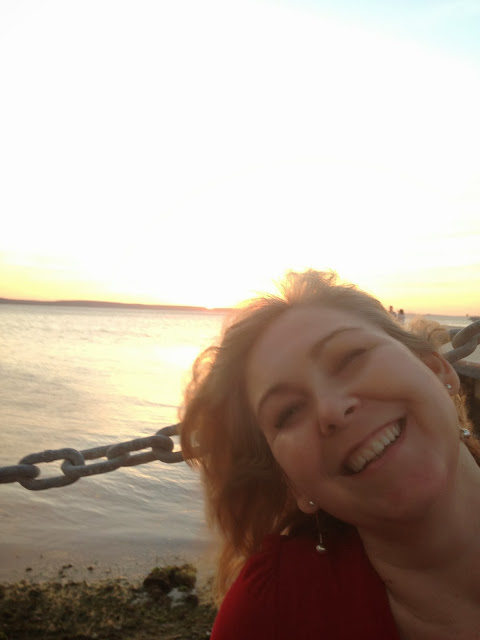 Then I take this one. 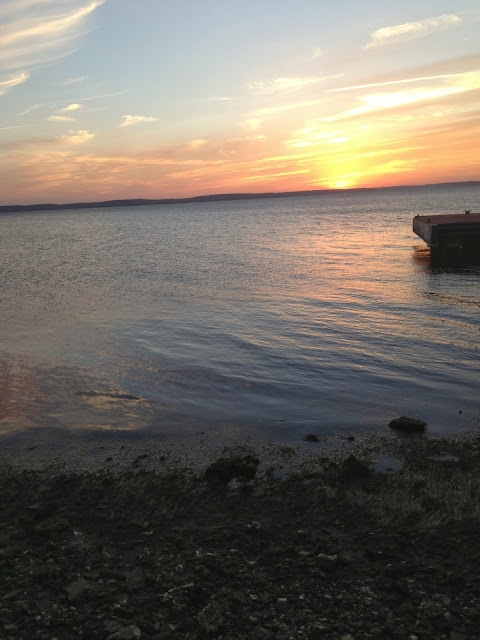 And then I take this last one, moments after the sun sinks into the sea, leaving the sky to turn itself indigo. 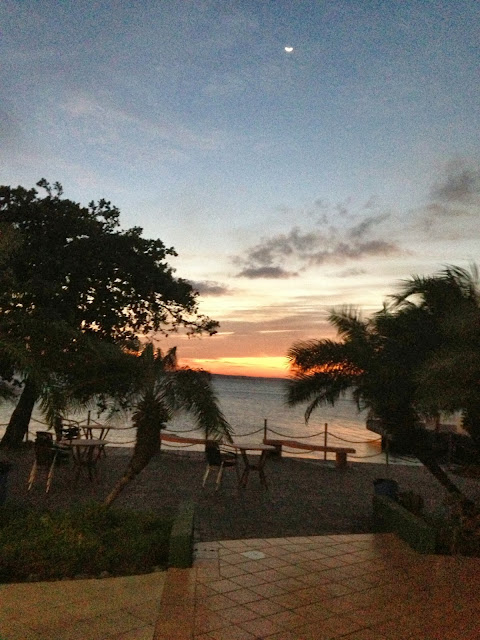 In a matter of minutes a darkness falls and Mom and start getting ourselves ready to return to our hotel.
I go to the bathroom and (forgive me, again for taking a picture when it's not appropriate, but I did it for you, so that has to count for something) there is someone in a stall shouting and it goes something like this.

If you look under the stall you'll see a single shoe of the person making that urgent toilet-call. 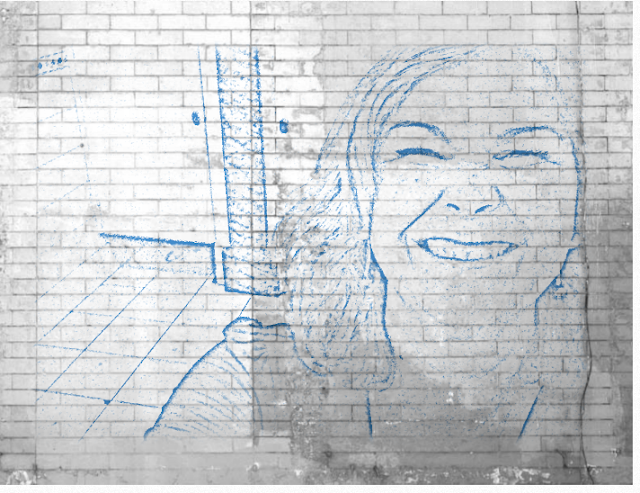 Mom settles the bill and we leave the Hotel Jagua and expect to see a line of taxis or something outside the hotel.
Nothing.
It is dark and silent.
I'm used to the streetlights and the parking lot lights of the modern world.  In the back of my head I hear a warning bell that this isn't the place to be -- no one knows where we are and to look for us.
Mom and I cross the street to a shiny post-WW2 modern Jetsons-looking restaurant, Covadongas.  Legend has it that Castro and his junta ate here on their way to Havana. Since Cienfuegos fell to the Revolution in September 1957, long before the full 1/1/1959 Revolution, I wouldn't be surprised if Castro had been here.
A picture of Castro hugging Maria Covadonga is on the wall. 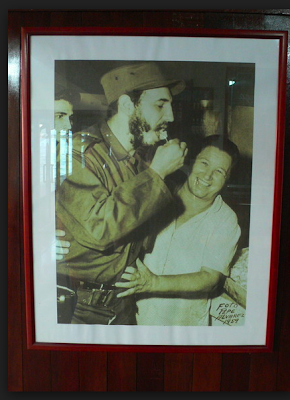