Mama Day by Gloria Naylor was assigned to me wayyy back last February and I've kept it on my "read soon" pile but other books kept jumping over it.

This book is so good I would give it to Isabelle Allende, Zora Neal Hurston, Margaret Atwood and Tina Fey.

Set in Willow Springs, an island off the Georgia-South Carolina coast, this scary smart historical tale will have you cringing, giggling and believing in magic.

Something happens in 1823, someone wills ALLLLL his property to his slaves and then dies.

From there, generations of boy are born in the Day family, but few women.

It reminded me of Shakespeare's Tempest -- crazy storms setting off changes in lives that bang into each other like dominoes falling. The story is narrated from at least three voices, maybe four,  spinning the reader through almost 200 years of love, betrayal, herbs, family and healing. There is a crazy sheriff from "across the bridge" and an independent woman who leaves the island for New York City.

Explaining the plot to you is like tracing a vine.

The ending is not happy, nor is it sad, and so it very much fits this tangled thorny sweet wise-woman tale.

My Mom loves when I add quotes to juice up the reviews, so here is a juicy bowl of sentences, blended  together out of order so that I wouldn't ruin a single piece of this delightful book for her because I'm sending her this book for her birthday (shhhh, our secret) (thanks).

“Time is a funny thing. I was always puzzled with the way a single day could stretch itself out to the point of eternity in your mind, all while years melted down into the fraction of a second.”

“She could walk through a lightning storm without being touched; grab a bolt of lightning in the palm of her hand; use the heat of lightning to start the kindling going under her medicine pot. She turned the moon into salve, the stars into swaddling cloth, and healed the wounds of every creature walking up on two or down on four.”

"You waited until the plane had landed to tell me that the man who would be waiting for us at the gate was a little strange.  And since your "little strange" turned out to be chicken feathers in his hat, a string of white bones around his neck, and a name like Dr. Buzzard, I spent that half hour in his truck with a growing suspicion of your "pretty little island."

“Home. It's being new and old all rolled into one. Measuring your new against old friends, old ways, old places, Knowing that as long as the old survives, you can keep changing as much as you want without the nightmare of waking up to a total stranger.”

"Miranda climbs the veranda steps and enters the front door of the other place. She closes it securely behind her. The lightning is flashing in the clouds. She's asleep when the clouds get lower and the lightning nears the earth.  It dances around the silver trailer, but it hits mostly along the edge of the forests, scarring a pine or two. It hits the bridge... It hits Ruby's house twice, and the second time the house explodes."

"She was tall and thin, brown skinned, with flecks of amber in her eyes. And she was lifting her dead child, dressed in a raincoat, out of her convertible. It was one of those moment when your mind simply freezes to protect itself from the devastation of a thousand contradictions, which freezes the body as well. If this was reality, it meant I was insane, and I couldn't be -- and she couldn't be, because I had met that woman."

"No headstone for Jonah Day.... He waits under a blanket of morning glory vines tangled among the sweet peas. They know he's there 'cause they listen."

"Tears catch in the back of the pale woman's throat as she brushes the dried weeds away from her mother's headstone.  Grace Samantha Day: I gave the first and only baby my grandmother's name. Ophelia.  I did it out of vengeance. Let this be another one, I told God, who could break a man's heart.... If I had known then what I was knowing all along, I woulda named her something else. Sapphira. My grandmother only softly broke a heart. My great-great-grandmother tore one wide open."

"Miranda stands still and listens. There is something funny going on. The graveyard is just up at the turn, but she won't go past it today.  Tomorrow maybe or the day after. She heaves a deep sigh. I ain't up to all this, Lord. I'm and old woman. And I'm tired, tired of knowing things I can't do nothing about.  Whatever is waiting in here today, I just ain't ready to face."

"And I decided I wouldn't speak to you again even if they held the Super Bowl in Havana." 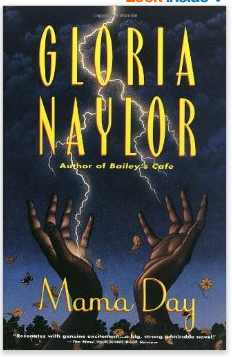