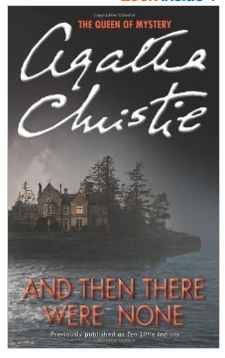 Dear student who assigned me And Then There Were None (Originally "Ten Little Indians")  by Agatha Christie but didn't write your name in it,

Thank you, this book was delicious.

I kinda sorta remember seeing the play at Parker Playhouse when I was in Middle School in 1980 on a field trip and I vaguely remembered little statues disappearing and gasping and general tense drama. I think the statues were Indians and the play had "Indians"in the title, but that was 1980 and we weren't as enlightened then. But I digress.

This book was much better than the play.  Of course it was. Agatha Christie is a genius and reading this book makes me wonder as I reach the end of this project if I should start sorting the books into genres and looking at things like how many of the 100 books my students have assigned me have been by women or by men or by fictional characters (Ron Burgundy is a GREAT writer; Tina Fey is better).

And Then There Were None is  fast smart read that delivers a sinister but satisfying and surgically violent multi-murder mystery that reminded me of Dexter from Darkly Dreaming Dexter.

Basically, the all the guests who have been lured to a remote  Gasbyesque mansion on an isolated British  island in 1939 where they find reasons to kill themselves and/or each other.

Because of all this death and murder and such  they're all dead when the police get to the island. Hence, the police are confused and blame Jameis Winston.

The police are confused and don't have twitter in 1939 so they just go on with life and wait for WW2.

The final chapter  And Then There Were None is a confession of the "crime" by the mastermind, who scribbled it down, put it in a bottle and sent it out to sea.

Because that confession is "found," the reader learns how one character plotted here and there, did this and that and deserves credit/blame for it all.

This book was a delightful escape to a world where no one is taking about ebola, no one is forwarding tweets about ISIL, no one is taking selfies or updating their status with this and that like and trying to #blamejameis for it all.