The Best of Me, by Nicholas Sparks 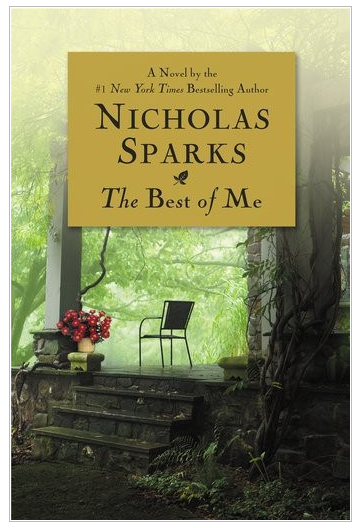 This book is coming out as a movie this weekend, so I don't want to spoil it for you with details.

This is not a love story. Love stories should be happy, upbeat and maybe involve Adam Sandler if possible.  This book had none of that.
By the time I finished the book I was exhausted, my mascara was ruined.
You can probably guess the formula based on this author's previous books.

Two people are given the gift of love and one of them throws it away.

Two decades later the universe sends them another chance when they are called to a funeral and sent off on a hunt together, following clues left by a mutual friend.

Here's the problemo.
She's married (to a jerk).
He's single. They hook up, kinda and it's wonderful.
This book is completely G rated, so there is just kissing and staring and thinking and driving and some hand holding.
There is love -- ten flavors of it, actually.  There are cool cars. There is WW2 (*ten point bonus). There is violence, justice, redemption and a ghost or two.

Than OMG it gets UGLY.

After I finished the book today I described the plot to my daughter and we agreed it was SCARIER than the whole season of American Horror Story/Coven.