The Dog Stars: A Novel by Peter Heller 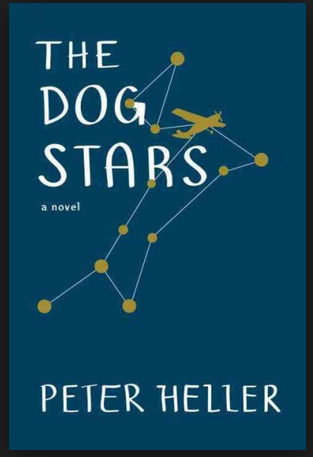 It took me a few chapters to get into this book. The sparse details are intentionally disorienting.

The narrator is not a man of many words. He is a pilot who loves poetry by Li Pon and his dog Jasper. He misses his wife, Melissa and lives with a crazy green beret guy.

Then we find out why the narrator is so turned inside of himself.

We know what he did to his wife. We know where he is and why, and what happened to the world.  We follow him through attacks and battles and ambushes (I skim the violent parts, ok?)

We witness what happens to his dog (and cry), and then we follow him on a brave one-way journey from his isolated landing strip and farm to someplace new,  looking for -- well, not knowing what, but going anyway -- using all the aviation fuel he had left.

200 pages into the book and was ignoring College Football Gameday, tuning out Tallahassee chatter about quarterbacks and memes, and hiding from my son and his friend Kaden.

I am transfixed on this man's pain and hope and survival. Plus he finds a Woman and there are 7 pages of "grown up" stuff that would make me blush to even write about.

The book ends when the narrator sees jets go overhead.  Communication is down. Electricity is down.  There is no internet, there are no phones much less "news" so he wonders to himself if the planes are Arabs.

Then more jets  go overhead and the narrator suddenly misses his dead dog again and thinks about his favorite poem by Li Shang-Yin:

When Will I Be Home?

When will I be home? I don't know.
In the mountains, in the rainy night.
The Autumn lake is flooded.
Someday we will be back together again.
We will sit in the candlelight by the West window.
And I will tell you how I remembered you
Tonight on the stormy mountain.

I turn the page.

The book is over.

Zack's friend Kaden is in the kitchen getting a glass a Sunkist and asks me what's wrong.

I tell him "this was a great book but then the guy looks up, sees planes, blames Arabs and says a poem."

Kaden shakes his head, "it ends like THAT? Is there a sequel?"

I don't know and for a moment I'm too annoyed to want to check, so I join the boys and make chocolate chip cookies and forget about the book for awhile.

Later I pick it up and read the ending again.