The Way of the Peaceful Warrior: A Book that Changes Lives
(1980, revised 2000) by Dan Millman 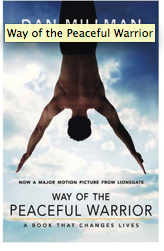 I love this book the same way I love other books about love, peace and spirit like THE ALCHEMIST, ILLUSIONS, HECTOR AND THE SEARCH FOR HAPPINESS and THE SHACK, and I'm genuinely annoyed at all of you who HAVE read this book for not telling me about it sooner.

It's set in California, late 1960s, where a Karate-kid like gymnast befriends a wisdom giving nonogenarian gas attendant  named Socrates.

The book follows the narrator's wisdom path of letting go of illusions ("Realizing is not the same as knowing") and seeing the unconquered mind as a source of great pain and suffering.

Socrates: "When you can't stop thinking of that math problem or phone number, or when troubling thoughts and memories march through your head its not your brain working but your mind wandering. Then the mind controls you... You have an angry thought bubble up and you become angry. It is the same with your emotions. They're your knee-jerk responses to thoughts you can't control. Your thoughts are like wild monkeys stung by a scorpion."

The narrator learns how much of the stuff in his mind is junk, and as he filters it out he finds himself wanting to learn more, returning to the gas station after midnight where Socrates tells him stories and gives him tasks. pushes him, coaches him, gives him riddles to solve and a super strict vegetarian diet, then finally leaves him to find his own way.

Think of Karate Kid, with no Karate. Got it?

The last advice Socrates gives to Dan before he sets off for awhile is to "just keep your attention in the present, Dan. This is freedom from suffering, from fear, from mind. When thoughts touch present, they dissolve....."

Love it. I'm going to print and frame that. quote.

The narrator takes us through adversity, recovery, a marriage and outer success which all fall apart because he still hasn't found the core question of who he is and why he is here and what lessons he needed to learn.

Later, after a mutual friend dies, Socrates shows up in Dan's life again (OK, there is a magic card involved that I'm cropping out of this review, but trust me it's cool)  and Dan asks harder, simpler more fundamental questions than he'd ever asked.

Dan: How did you jump to the roof?
Socrates "There are no well-defined edges of reality, Dan. The earth isn't solid. It is made of molecules and atoms, tiny universes filled with space. It is a place of mystery, light, and magic if you only open your eyes."


Dan: What is love? Help me understand.
Socrates: "Love is not something to be understood; it can only be lived."

Yes. True. Wow. Deep and shallow at the same time, so Zen! I'm going to print that out and frame that and probably sell it on t-shirts. Seriously.

Dan finally asks when and how he is going to finally become a warrior  and Socrates tells him (right before leaving him forever, like Yoda)  "A warrior is not something you become. It is something you either are, in this moment, or you are not.  The Way creates the warrior."

With that, Dan finally surrenders to the absolute moment and changes his life, awakened to live in the moment he remembers this:

Enlightenment is not an attainment, Dan; it is a Realization. And when you wake up, everything changes and nothing changes. If a blind man realizes that he can see, has the world changed?

This book is now one of my favorites and I would definitely recommend it, except the parts on eating vegetables. I'm not THAT enlightened.