Black Light. " by Patrick Melton, Marcus Dunstan and Stephen Romano "A debut thriller by writers from the SAW franchise" (2011) 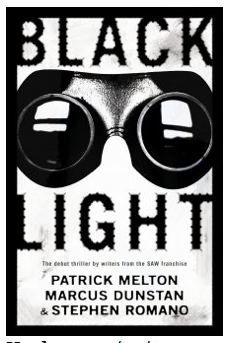 This book was written by writers from the Saw franchise ("from"? were they major writers? last minute re-writers? shoot day line changers? hmmm?) and if you like horror gore you will probably like this story.
I like American Horror Story (love, sorry, I mean I LOVE American Horror Story).
I like Halloween Horror Night.
I like to be scared, it makes me laugh.
This book didn't scare me. I'm sorry.
It read more like a screenplay than a book, and I think I would have enjoyed watching it much more than I enjoyed reading it.
To be honest (which is also written "#tbh" for people who don't speak hashtag, don't know what #WCW means and probably think LOL means Lots of Love) I've read two really good books and graded 200 essays since finishing book #73 which shows that this book didn't drive me crazy enough with enthusiasm to want to share it with you.
The book book is set in the present, and the past.
There is a hero who is an anti hero who swallows souls (right?) and who also might be his father's killer. Or possessed by the spirit who killed his father
. I don't know. This book didn't read like a Stephen King or John Grisham story, and I'm thankful I don't have to take a test on it!
Here are a few passages to give you a taste of "Black Light"

The bloody mess shudders and cracks and smears, surrendering its substance a little at a time, an unrecognizable wad of decimated flesh and bone wearing cheap shoes.  And it finally gives in to the laws of physics and tears away from the grip of the mark, exploding into a million glittering fragments, the  pieces of Tom splashing from here to eternity, most of it sucking through the destroyed window.  (222)

My mother and father face each other for the final time. They both knew this moment would come. They were ready for it. The 8 followers of Blackjack Williams lie dead at his feet. Blackjack is my father. MY FATHER... The gun kills him. THE GUN KILLS MY FATHER. (224)