100 Book Project: Book #72: The One with Bitch in the Title: Subtitle: "Once you start laughing you start healing"

Why Men Love Bitches: From Doormat to Dreamgirl - A Woman's Guide to Holding Her Own in a Relationship by Sherry Argov 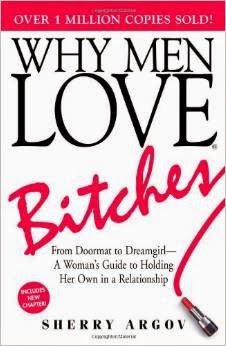 I have never been more tempted to write a review that is only quote after quote, and the fact you have any of my voice in this story is sheer luck.

I agree with the author, and I am trying not to spend too much time wishing I'd read/written/imagined this book before she did, but honestly I don't think about things like dating and how to impress men etc.

This book can inspire you to be a better friend, sister, daughter and parent. It talks about boundaries and  dignity and the importance of making your priority becoming who you are intended to become.

This book could be a sequel to seminal book "The Feminine Mystique," explaining how and why women (and people) need to spend their life energy becoming a complete person, not  an emotional - financial - social parasite on someone else.

Before we go further, let me explain that "bitch" is an acronym for "Babe in total control of herself" which translates to "grown up." For example. bitches make their own money, pick their own clothes and don't depend on a man for the life blood of the meaning of their existence.

I'm not going to argue with the use of the word bitch -- it's a catchy word considering the acronym it stands for, and I've been called that more than once to my face and right behind my back so I have long known better than to spend my precious life energy fighting with words.

I think this book hooked me when the author described the way bitches cook... we make microwave popcorn.... and she suggests wearing an apron and using oven mitts to open the popcorn.  Basically, don't worry about spending 6 hours cooking for a man because 1) that's weird 2) that's inefficient and 3) "if it's warm he will eat it - the rest is wasted effort" (page 6). I agree. My creator did not put me on this earth to cook for people who can cook for themselves -- I am called to spend my time doing other things, and I don't apologize for that choice (so I'm a bitch, feel free to love me....).

Page 40 talks to an audience I don't understand... "Don't appear to eavesdrop on his conversations... Don't ask him to spend all his time with you and don't say "I miss you" when you haven't seen each other for two hours... Don't say things like 'tuck in your shirt'... Don't ask him if he's hungry three times in a row..(p. 40).  I think anyone who needs this advice needs to go to AA for dating.

Some of the advice in this book is overtly (scarily) manipulative. For example: Attraction Principle #18; 'Always give the appearance that he has plenty of space. It gets him to drop his guard." Yikes!! Run!

There is an entire chapter on sex comparing sex to a candy shop and using jujube's as the marker of how far men want to go.

Every man wants to have sex firstwhether he wants a girlfriendis something he thinks about later,By not giving him what he wants up front,you become his girlfriend without his realizing it. (page 60)

Other principles are also worth quoting, printing, framing:

When you are always happyand he is always free to goHe feels lucky.

Page 136 lays relationships into an equation:

The more independent you are of him
The more interested he will be.

The end of the book left me breathless. I wish the author stated this earlier; I wish there were a campaign for this issue. Everyone needs to learn this, live it, teach it.  It summarizes the goal of finding a partner who has a life, who has their own dreams and who will not drown you in their neediness.

The most attractive quality of all is dignity.

Email ThisBlogThis!Share to TwitterShare to FacebookShare to Pinterest
Labels: 100 Books, Boobs and other Lady Lumps, Cubanitas, Dancing Awkwardly through Motherhood, domestic goddess, Smiling at the Sky, Tales of Being Sneaky and Getting Away With It, Unsolicited Gushes of Love
Newer Post Older Post Home