The cover of this book shows a woman in a strappy slinky gown, barefooted, sitting on a suitcase.   That image, plus the title made me expect this book would be a romantic dirty romp. 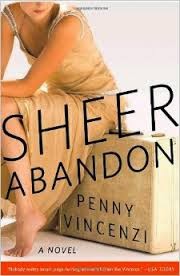 I was wrong.  This smart book untangles the stories of four people: three women and Kate, the one who is trying to figure which of the three women is the mother who abandoned her.

For some reason this plot is familiar, I'm sure I've read it and seen it, in fact I think Phoebe Cates was in the movie based on the book whose title eludes me. In that book the "searcher" was angry at her birth mother; in this book Kate's emotional life was a lot more mature and interesting.

I've never heard of Penny Vincenzi before and now I'm a fan. This 620 page book evoked the thoughtfulness of Jodi Picoult but the characters each had an edge that made them sharply 3D.

Explaining this thick plot would be like summarizing an entire season of Grey's Anatomy to someone who doesn't even know which doctor's survived last year's plane crash.  In reflection, I"d say Sheer Abandon is ultimately about how small acts of kindness and bravery change the paths of many lives. The title doesn't quite match the story for me, but maybe later, when I'm not concentrating, it will suddenly make sense. I hope so.

I know this  review was rather brief, but I've already finished Book #71 and it's one of the best, most powerful books I've ever read and I'm in an excited hurry to write about it.