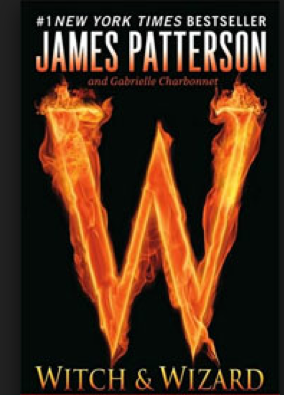 Book #57 was given to me by a student who warned me this was the first book in a series and offered to give me the other books when I was ready to read them.

I think I forgot that in the 7 months and 50+ books since then (and also having gone through WW2 five times since January, I'm always mentally elated and exhausted)  and if I had remembered that tidbit I might have read this book faster than I did.

This was short book written for a young audience: many chapters were less than four pages and the plot moved roller coaster fast from this world to that one and boom there is magic and a weasel and a drumstick.

At the almost-end of the book a series of prophesies are reveled, promising enough stories to fill four or five more books.

Awesome. I love James Patterson but I won't be reading any more of this series.

Having read all the Harry Potter books I couldn't  help but scowl at things that seem too similar between the books, -- in fact it seemed like someone wrote a formula and said here, fill in the chapters.
Some things felt too close to Potter....  instead of He Who Must Not Be Named, there is The One Who is the One.  Instead of dementors there are other spirits that suck your warmth and happiness.  There were redheads (OK, yes, those are universal) but still. If you haven't read the Harry Potter series, go read it. It won't let you down.

I brought this book with me on a strange day, one where my son would be an actor on a film and I would be the parent.  The shoot goes long into the day, my phone is dead and I get a little bored so I stroll around in the base camp.

There's a huge spider living in the corner of this outdoor state park wooden building.  I'm sure it's heaven for the spider, but I need someone to play with so I decide to throw skittles at the spider.  I'm a pretty good shot (not) and one of the skittles gets tangled in the spider's web, dangling menacing between the spider and the table of food below.

I throw a rainbow of skittles after that and none hit the web.  Enough. I switch to grapes.

A film school student walks by and says (in the most professional way) "that is a bad idea."

I agree. I get on my scooter and go back through the bumpy national forest, back to my car and get Book #58.