In any other city we would have steered clear of an orange-haired stranger wearing red fishnet stockings on the corner in the middle of the day.

Today, here in Cuba, we are rolling with whatever happens. Since the universe sent this nice lady directly into our path holding a menu and asking us to lunch JUST as get hungry and thirsty, we say yes and follow her down a steep tourist-lined street and through a small doorway into a tiny restaurant. 7 tables of varying shapes are turned and tucked and twisted into approximately 1000, square feet. 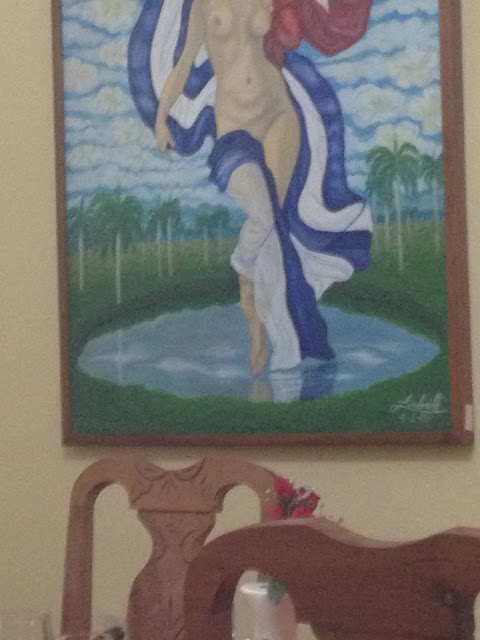 A man with a blondeish ponytail sings to a table, surrounded by vivid art of pink horses and topless blue women.  I like it immediately, and we allow the woman with the crazy pantyhose to seat us at a small two-top table just outside the kitchen door.

Next to us was a long table of English speaking tourists.  Mom tells me to sit facing the door so I can see more of what is going on. This is perfect, I have the back seat corner, the best view for a writer.

Before I can look at my menu, before I can even absorb everything, I listen to the tourists at the table next to me speak loudly and freely, maybe thinking English was a secret language here, tantamount to Harry Potter's invisibility cloak.

A man talks about how heavy he feels, and how much he's lost over the last few years just from walking.  A lady shares a story about taking Alli and instead of losing weight she just pooped on herself. Mom and I keep a straight face. She reads the menu while I type into my iphone a memo "Lunch. Americans talking about Alli.  Poop." confident those  cues will help me remember the story for you.

The owner, a man in a pink shirt and plaid pants who speaks perfect English with only a mojito-sized mouthful of a Spanish accent visits with the table next to us.

They ask him questions about Cuba and Cienfuegos and Cuban History and he doesn't really know the answers and tells them so, but the room is so small his butt is practically on my shoulder and it's taking every bit of restraint to not just answer the questions.   This must be what it feels like to be undercover.

Mom listens too. A thin lady asks about race relations and segregation on the island and intermarriage on the island. The man in the plaid pants says that there's a good piece on race in Cuba and it was just on TV.

He pauses.  It was just on PBS, just last week.

I can't take it. I could move my elbow and bank him in his back and answer this quickly.  It's Africans in the Americas, I know this series, the new one, t is delicious.

I can't take it now, for real. I tug a the bottom of his plaid shorts, which rest just above my table.

Excuse me? Africans in the Americas.

His face lights up. YES! THANK YOU! You all should definitely check that out.

Someone at the table coughed and after that they talked in mumbles with each other, split their check and turned sideways to slip out of the restaurant.

Mom and I decided on the paella, testing our luck. It came with a salad, which we knew Mom would eat.   I ordered tostones "for research purposes" and to take this picture. Oh wait, this is the paella. The tostones went quickly. My bad. 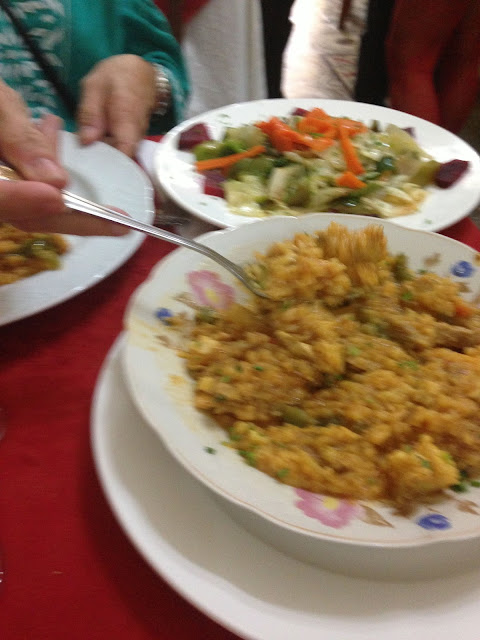 As Mom and I ate, we listened to the man with the ponytail sing, and as soon as I recognized it was a song about Che Guevara I got an awful knot in my stomach.  I felt the sting of every exile who left this island every time Che's name came up, and I knew not to enjoy this song.

But I had to document that it happened, that I live in a long imagined future where Cuba is open enough that I have visited a Cathedral, museum and private restaurant in communist Cuba.

The songs I've heard about Che are long and wailing. They are sad songs of lost heroes, like what the Irish brought to the US with them during the potato famine. This is Richie Perez and the guy in the plaid pants singing.

The restaurant clears and the singer comes closer to our table.

He asks if we would like a particular song and she asks if he knows this Cienfuegos song. His eyes light up. He does know it. It's a city song about itself, not quiet as delightful as what Jose Marti wrote about Guantanameras, something like the fight song.


The tostones were ridiculously wonderful, for the record.  They were on the thin side and extra crisp.  All and all delightful.

The paella tasted of curry and seemed to have no identifiable seafood or pork. It was  basically dry yellow rice.  We didn't say anything and saved room in our stomachs for the other paella, later.

Richie the singer talks to my Mom for a couple of minutes, about things they remember and places and buildings. He is a Scorpio, and every piece of his jewelry means something.  The more he talks the more I see him as an artist stuck like Gilligan on an island.  He offers a CD for $5 and I think Mom pays him $20. 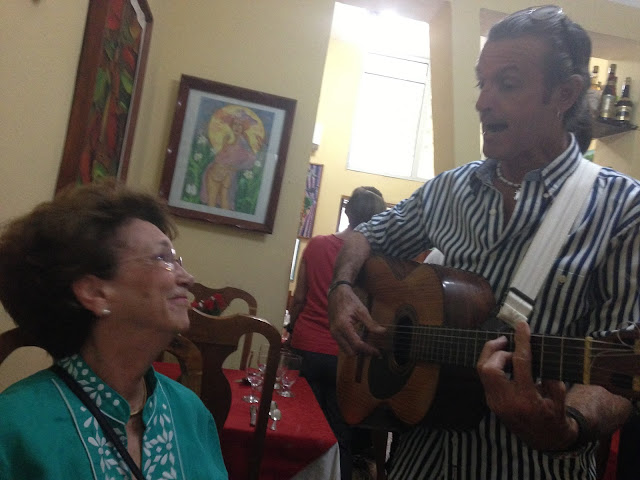 After that, we get up and turn ourselves sideways and slip out of the restaurant to the crowded street. It looks like schools have gotten out; a girl in a blue jumper goes this way while a pack of boys in brown pants sticks together closely, walking in perfect synch with the story that one of them seemed to be telling.

A few steps up that street and Mom took me down street lined with Victorian storefronts. 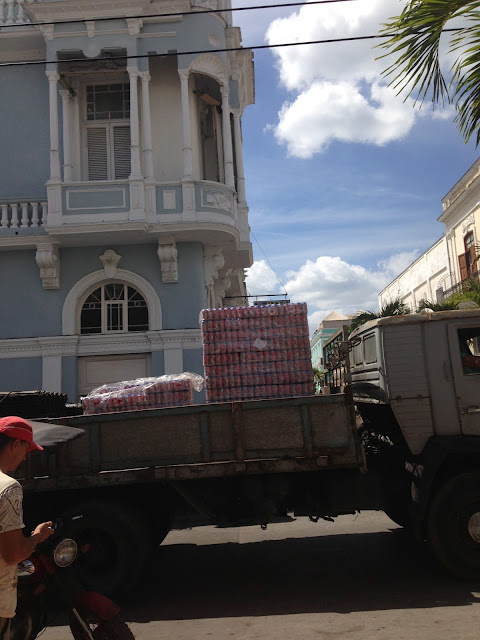 We go in grocery stores, tiny ones that make Circle K look posh.  There is nothing To Go, no drink machines, no fast food counters.  One store has toilet paper under glass lockdown in display cases. Most of the stores  we tiptoed through had  plastic goods that look straight out of the dollar store -- bright colanders and stacks of pastel cups and pink baby toys.

I saw this and couldn't help taking a picture for you and yes the Cubans shopping in the tinyunairconditioned store did give me weird looks for taking this picture. Here you go. 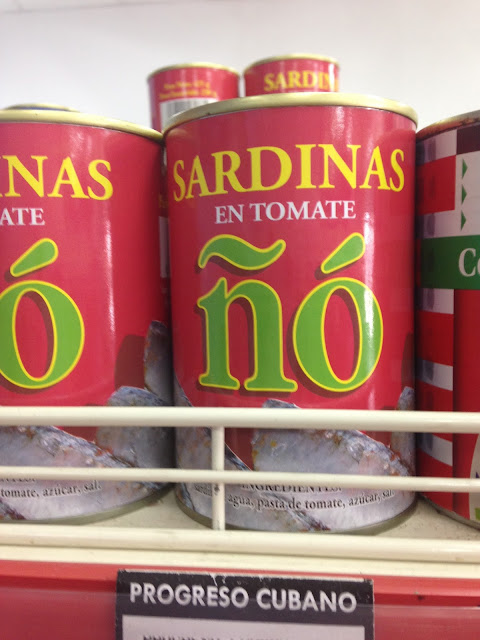 I saw a stack of sandals for $5 each and a corner of store that had shoes almost-as-cute-as-Jessica-Simpson-pumps.  They were $22.  This makes me let go of the idea that Cubans have no stores, no fashion. They have some.  I a few cute shoes but they barely compared to store after store filled with rows of mu-mus in flowered prints, and stacks of dark blue work pants.  In one of the stores I see rum for $10 and 2 liters of cola for $25.  Communism has not lead to price controls. Remind me to write a book about that.

After the stores we find ourselves on a crossroad with the Prado, the street that TiaLourdes lives on.  We walk about a block down the middle of the statue, tree and bench lined street.

A statue calls me, it is dedicated to a singer who was born in colonial Cienfuegos and sang songs of great pain. Her fashion statement is atrocious but I like her soul so I took this for you.

Do me a favor. Pretend you can't look behind her and don't see a pizzeria in communist Cuba. 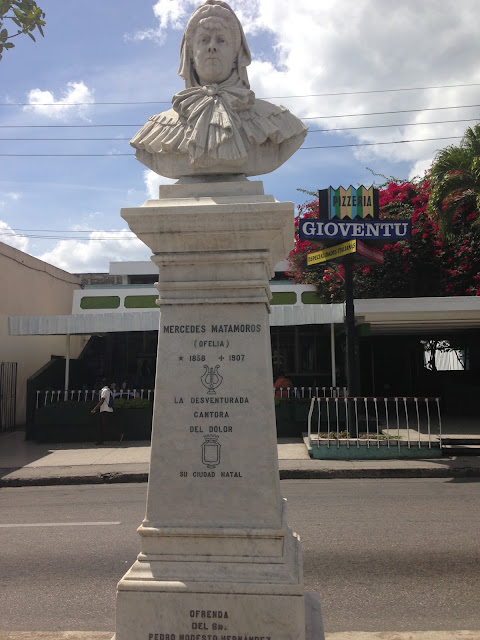 We are across the street from TiaLourdes house; we could go there and say Hi and maybe stop by the bathroom. Like I told you, I don't want to share my Mom, and who knows what would happen once we cross that threshold.
I remember there's a coffee shop next to Teatro Terry, on the other side of the Cathedral.  Mom thinks that would be a nice place to go for a few minutes and on our way there we pass by the side of the hotel.  It is after 3pm, and Mom is worried people have been trying to reach us.
Duh, of course people have been trying to reach us, I know not to say this, but the moments the two of us can be completely anonymous and just together are precious. I'm sure that if she checks in there will be messages and if there are messages there will be responses needed and I'm usually OK with that but today and just today I want my Mom all to myself.
Mom peeks into the our hotel from a wrought iron side window. We should go in she says. Again I tell her there is someone waiting, in a pink shirt, with a purse on her lap.
Mom looks again and proclaims the lobby is empty.
Fine, fine, we will go to the hotel and freshen up and figure out what to do from there.
As soon as we enter the hotel, I see I'm right. She's there, pink shirt, purse on her lap, posed at the first chair, wondering where we have been all day. 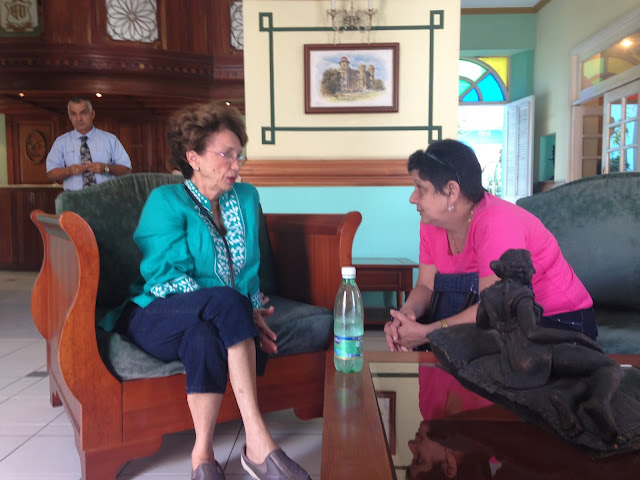 I take a picture to prove I'm right and then slip off myself upstairs, so they can talk.
Which starts the next part of the whole adventure.
on September 17, 2013