5 Days in Cuba: Thursday Part 3: The Part Before it gets Awesome

One of the hardest parts as a storyteller is to forget where the story is going, forget that I know what the rest of the trip holds, and go back and be present in the small things that unfold in early Thursday. 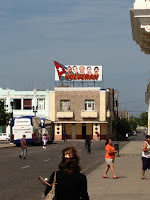 After we finish taking pictures in front of the statue of my favorite Cuban-American, Jose Marti, I follow my Mom across the street. A large sign reminding Cubans of the 5 Cuban "spies" that have been held in the US glares at us.  Mom tells me she  heard one of them is free, that he lives in Hialeah and is happy. I believe her.
The problem with the picture I took standing outside the Teatro Terry is that I cut off the rest of the tour buses that line the street. On this particular day, Thursday, I know that a tour from my college campus is somewhere in Cienfuegos doing something. This time with my Mom is too precious to share so I didn't share my itinerary or ask where the group might be. In my head, they could pop up around any corner.
The first building we go by is the school of arts where my Abuela attended. This isn't a public place for tourists so we just walk by and smile, knowing we are walking in her steps, reminding ourselves of Abuela's happiest most carefree days.
Then we try to enter Teatro Terry, a building named after it's benefactor who also gave money to several other municipal enterprises and resources including an asylum for the aged. Those things have been taken over by the state since the  Revolution that hit Cienfuegos in 1957.  Post-revolutionary Cuba sees no citizens with the resources to be community benefactors, I understand that, and love learning about those who chose earlier to give their money to make this city great.
Many years ago my Abuela danced at this theatre. I think Abuelo was in New Orleans at the time, studying English at Holy Cross High School, literally 100 yards from where my father -- a stranger to him -- would grow up and later attend the same school. Cienfuegos and New Orleans are twisted together like that, like my DNA.
Once we enter the building I am enthralled.
The lobby is lined with flyers from the heyday in the 1920s and 1930s.
Mom and I take pictures by the ones we've heard Abuelo mention, and giggle at the pack of tourists who are looking around and asking each other quite loudly where they are and why this place is important.
A very very skinny college-age-looking girl in skimpy shorts pouts to her boyfriend (husband?) that she's bored and he tells her they can go back to the bus after he takes  a few pictures.
They're in a different Cuba than we are.
Mom and I take pictures by the stage where we are sure Abuela performed. 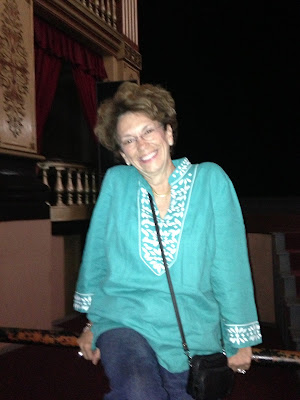 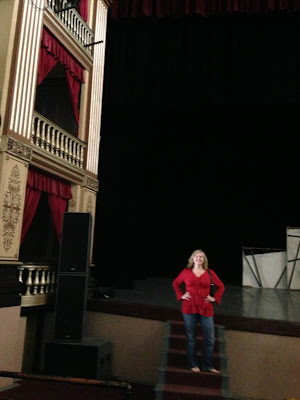 After that we get  into the chairs and take pictures.
The bottom of each chair is marked with a sticker from a United Nations fund to protect the arts and history.
For once I hope this is my tax dollars at work. 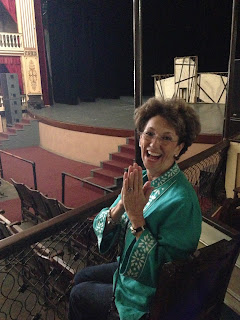 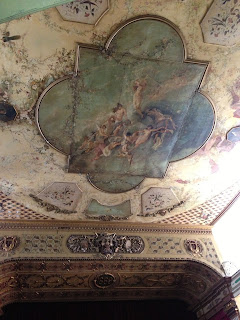 I can't help but wonder how the social and racial segregation of this town played itself out in pre-Revolutionary society.

There is a big entrance to one floor that comes from one street and another entrance to a higher floor from a side street.

Is that how people kept themselves apart? Or is it a coincidence?

I don't know who to ask so I send this out to you. 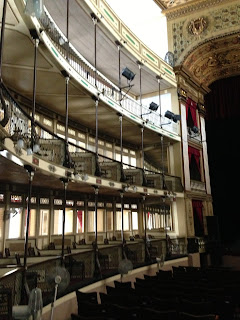 We leave the theatre and walk around the corner.

There is a center for artists that I'd love to go into, but it's not for us, not today.

I take this picture for you so you can see the walkway we are under. 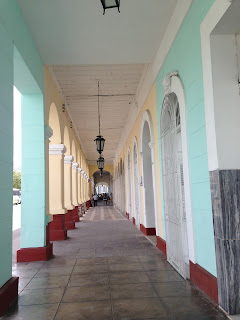 Around the corner Mom and I find an art shop with postcards and tshirts outside. At this point we could be in New Orleans or Key West or Jacksonville.

The shop is filled with brightly colored crafts that, if I didn't know better, I would recognize as Floridian or Creole. 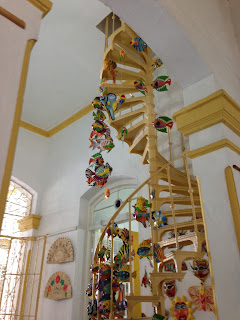 Three steps past the art shop and Mom and I find ourselves at a museum of the history of Cienfuegos.
She asks me if I want to go in and I give her this look like I could imagine wanting anything MORE than to go into a museum today.
The lady at the front is wearing fishnet stockings and some sort of official uniform and is straining her brain to figure out if we are Cuban and whether to charge my Mom an admission fee or not, based on the fact she was born in Cuba.
Before a minute can pass we offer up a donation for our entrance and walk into this huge building.
If I'd known there was a building so close to my hotel -- not a block away -- full of historical artifacts I would have been here sooner. But because I refuse to plan, refuse to map out my time, here I am. Maybe I'm late, but maybe I'm just at the right time.
One of the first rooms to the right is supposed to reflect a Spanish colonial dining room. It looks so exactly like my Tia Lourdes' dining room I can't help but take this picture for you. OK, maybe TiaLou has a 1920s fridge in the corner of her dining room, but that's the only difference. 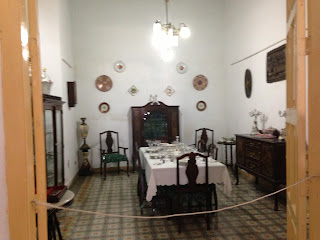 Around the corner from that room there was a row of statues that came from Spain. I can't imagine the trip these statues have had through Cuba -- colonial, Republic, Revolutionary -- but as an artist I'm delighted to meet them and take pose for this silly picture. 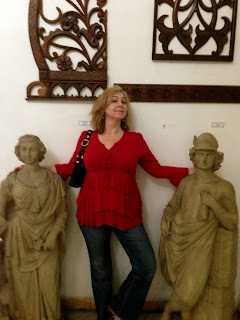 On the wall beyond that my Mom has stopped speechless.
There's the peacock gate, the one that was in front of mom's cousin Nena Becker's house from before the Revolution.  We stand in front of it in awe as the lady who works here explains it was all made from one piece.  Mom turns to the lady and says this is from my cousin's house, we're just so happy to see it's OK, that it wasn't destroyed.

No, it wasn't destroyed, the lady says, the adds, it's part of our history. Past the gate we go to stairs and on the stairwell my Mom shrieks.
OK, she kinda shrieks, maybe she laughs. She's found the street name from the preRevolutionary street they'd lived on. Before this we had no idea where those signs might have gone but here they are. Someone had the sense to say that Cuba is having a revolution but that doesn't mean everything that happened before now isn't real and didn't matter so they kept it. Thank you, whoever you are. 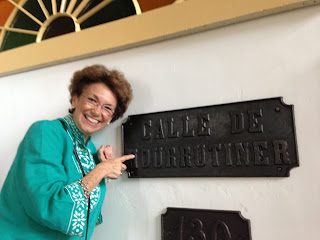 From there Mom and I walk through exhibits of Cienfuegos history from pre-Spanish times to the modern era. I'm most struck by the bones they excavated and displayed to show a native tradition of burying dead infants with adults to guide them through the heavens.

The guide explains to me that an adult would offer themselves to be sacrificed to be with the child. I nodded, silently. If you look you can see the reflection in the glass of her pointing to the bones. 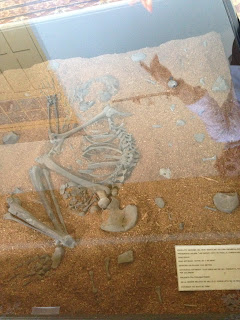 From there we went through rooms of memorabilia from the sugar boom, the 1920s and the revolution. I took 100 pictures that I won't bore you with here.

The guide offered to take us to a room of art, and we followed her. I see a statue and take a selfie with it -- that's our guide in the back with the fishnet pantyhose.  My mom asks why I took a picture with THAT statue and I tell her it's Jose Marti. The muustache and hair tell me so, along with the fact he's saved here in a city art gallery. 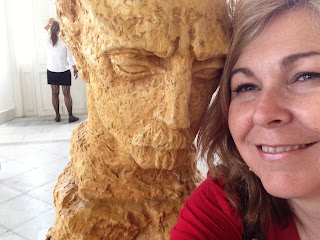 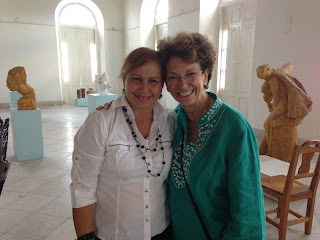 After we finish at the museum Mom and I realize we are thirsty and hungry.
Mom asks if we should go back to our hotel but I say no, I have a deep strong feeling that someone is waiting for us at the hotel, that it will disrupt our time together.

No joke, I feel towards my Mom like the US felt towards Cuba before 1959. I want her undivided attention.

I take a deep breath as we pass the side of our hotel and announce to Mom that someone is definitely there waiting for us. She's wearing pink and has her purse on her lap.  I'm sure she's in the first chair, as soon as you walk in.

Mom squints at me and asks me if I'm sure I don't want to go to the hotel and check in and check our messages.

I'm sure I tell her and we take a few more steps and are accosted by a woman with bright orange hair who is wearing red fishnet stockings.