When Mom and I planned our trip we decided that Thursday would be completely free, just us, just doing whatever we feel like, no deadlines no plans.

This, to me, is heaven.  I cannot tell you what I want to do five minutes from now, much less what I'll want for dinner tonight or where I might want to spend Spring Break.

Around 10:30am on Thursday, our 4th day in Cuba, Mom and I stepped out on the street in front of the hotel onto D'Clouet, then took a right on San Fernando then turned again on Santa Isabel. 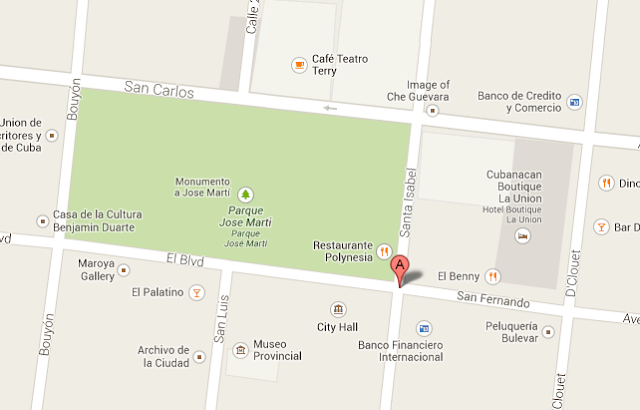 We head straight into the  Cathedral de la Purisma Concepción (Immaculate Conception of Mary).  The cathedral was completed in 1869, which makes me think it would have been done 5 years earlier if the US Civil War hadn't tripped up trade in the region.
Considering the Cathedral was built in the colonial era during the reign of Isabella II of Spain (remember her? the one who was forced to marry her first cousin? the one whose children were rumored to all have had different fathers?) I'm not surprised it celebrates Mary and not a male saint.
While the cathedral was under construction in 1854, the Catholic Church announced it to be official dogma that Mary, mother of Jesus, was specially chosen by God to be born free of the taint of original sin. One woman spared for blame for what Eve did to us all. Something worth celebrating, and also a way to elevate the status of all women as pure mothers, capable of a higher love than men.
Before we even enter the heavy wooden plank doors I get an overwhelming feeling this spot has protected generations of tight matriarchal circles of faith lead by women whose men were gone for months and years at a time to work in plantations, sail the seas, search for riches and fight their way home.
The entrance to the cathedral feels awkward; when we step in we do not see the altar but are faced with a wall of planks that have flyers asking for money to restore the building.  I dip my fingers into the huge marble font so I can bless myself before we enter more sacred parts of the building.  The font is empty.
Mom and I enter, holding hands. I've spent many hours over many years in cathedrals in New Orleans and Tallahassee, lighting candles and kneeling and working my way through endless rounds of the rosary, so I expected to walk in on people sitting in prayer. 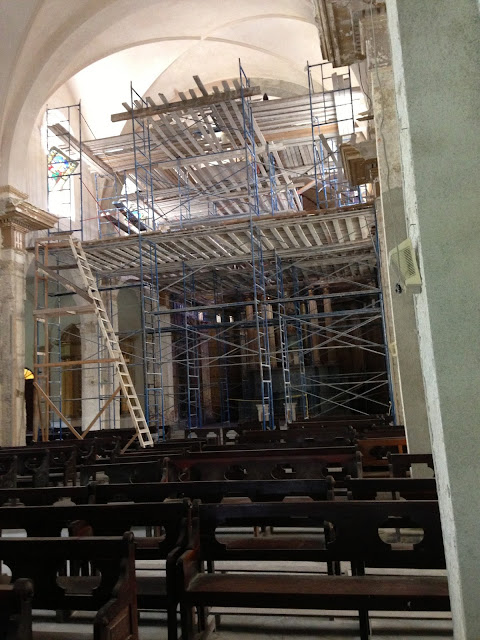 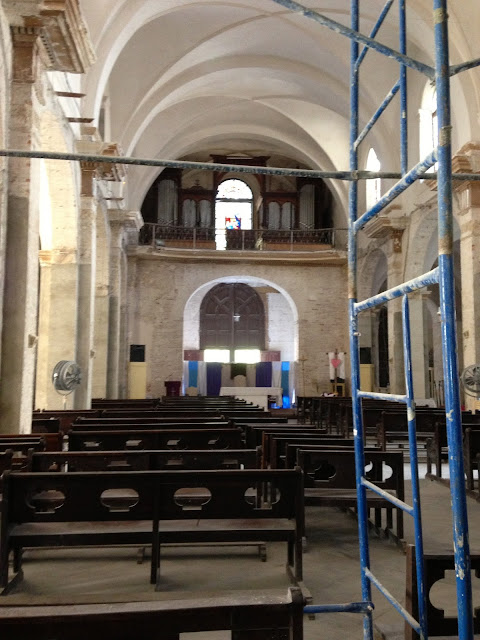 The pews were all turned to face the entrance. A few were turned at odd angles.  Construction braces were here and there and all over that side.  A tourist -- his plaid pants made me guess he's German -- snaps a picture of something behind me and says to his friend
something like that's all, let's go.
Normally you can't (shouldn't?) walk directly down the main aisle of a cathedral without genuflecting as you cross the crucifix but I'm thinking these rules are turned around in this place. 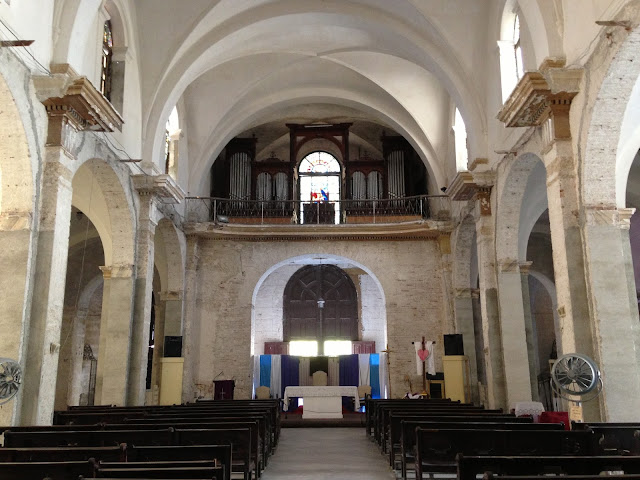 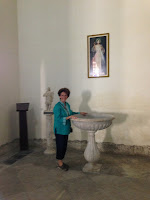 Then I step away from her and really look around.  I know the columns in here are supposed to have some Chinese in them, offering simple translation to Chinese workers
on the docks and plantations.
I take a few pictures of this, that and then of a gorgeous statue of Mary, mother of God, standing on top of the earth, barefoot. That image is so contrary to the patriarchal economic and political system it almost makes
me giddy. 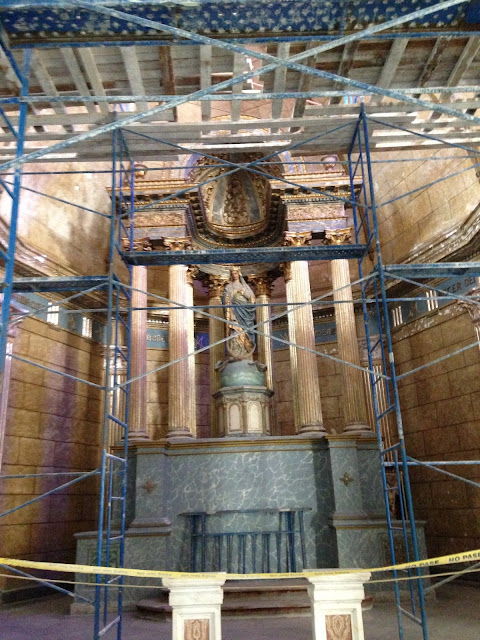 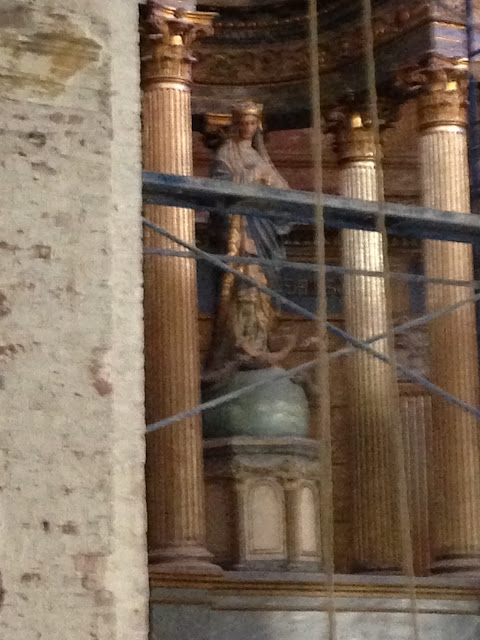 I take pictures of the organ, of the stained glass, and restrain myself from taking pictures of the other tourists there. We visit the small garden outside where AVE MARIA is spelled out in foliage. 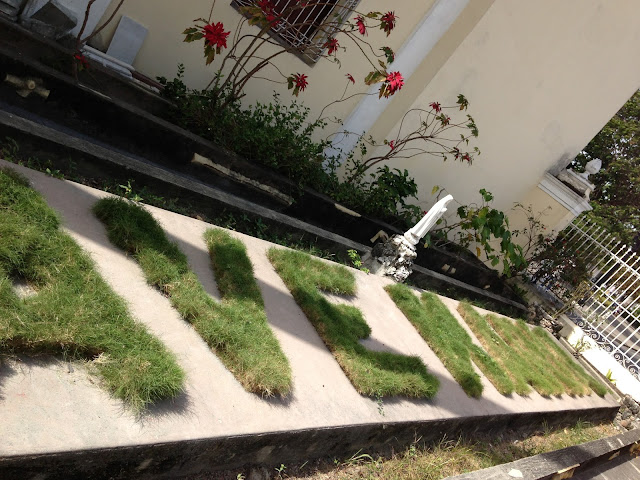 Without much discussion Mom and I agree that now isn't the time for us to sit and pray.
Anyway, I want the trophy shot, the photo I came here to get.
On my first trip to Cienfuegos we didn't stop by this park, so I only knew there was a park named for Jose Marti, a poet-philosopher who worked tirelessly in the US stirring up exiles to stick together for the cause of Cuban independence.
What I didn't know, until I saw in my Mom's photos from her earlier trip to Cienfuegos, was that there was a second figure in the statue celebrating Jose Marti in Parque Marti -- Lady Liberty.  Many web images of the park cut her out, but no, there she is, there she has been, representing Cuba's birth as a Republic in 1902.
Ever since I realized the Statue of Liberty was in Cuba, I wanted to take my picture with her. So I race across the street, less cautiously than I would have been in the US, but also not afraid of the mopeds and bikes weaving around the corner in my direction.
I stand outside the fence that protects the monument. Mom takes one picture, another, another. I am pleased. 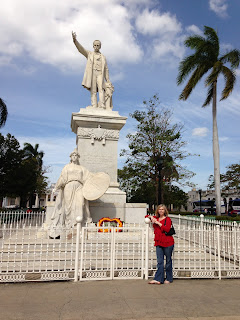 We have the trophy shot.
We can relax now.
What's that? I ask, and point to an ornate building.
Mom grabs my hand and our adventure continues.
on September 15, 2013