After the kiss kiss kisses to Machete and then to Mila and Xavier, Mom and I entered the hotel lobby and discussed what to do next.
We quickly agreed neither of us needed to change our clothes or get anything from the room. The sun was quickly setting and we wanted to go to the rooftop bar restaurant - I'm pretty sure it's called the Black Venus.  We sat down and took the view in. 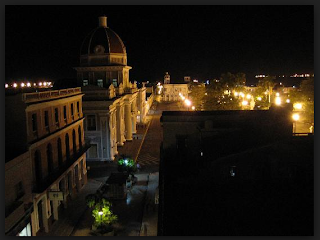 I wrote a note to myself to look up what the Negra Venus was.  Last year I fell in love with a flower-shaped cross and found it brought me to the legend of Marilope, a half-Indian, half-Spanish pure soul who defied a pack of pirates.
Marilope Bar is very small part of this hotel; La Negra Venus is the huge rooftop place.
She must be pretty important.  When I get home I start hunting for the story and this what I learn, mostly from Ana Mendieta,"La Negra Venus, Based on a Cuban Legend".

In as much as some children are born deliberately by parents who REALLY want them, Cienfuegos was founded intentionally by a mother country who REALLY wanted another city.  After the demographic, economic and political chaos from the Haitian Revolution and the War of 1812, Spain wanted to fortify her last colonies with  a "particular" population in mind - whites.  A major investor in the colony that would become Cienfuegos was a sugar farmer from New Orleans, a town that bounced between empires much like Cuba did --  first Spanish, French, Spanish,English, America.  Around 1817, when Spanish colonists first set foot on the Cayo loco, a key off the south coast of Cuba near the city of Cienfuegos—they found only one person, a young black woman, nude except for necklace and bracelets of seeds and seashells, and so lovely that "the most demanding artist would have considered her an example of perfect feminine beauty." History tells us that this woman was the sole survivor of innumerable generations of the Siboney Indians, but I wonder if she might have had another background, one that would've given her African parents.
Living alone on the Cayo Loco, a woman was accompanied everywhere by a white dove and a blue heron.  At the sight of the Spaniards invading her home, this free happy woman ran.
History remembers that the Spanish colonist caught her and discovered she was mute. I think maybe she was too terrified to talk to her captors.  They called her the Black Venus.When one of the colonists took her home with him, gave her food and clothing, he expected her to please him and to work for him in return. But taken from her island freedom, and unable to speak, she nestled in a corner, refusing to get up, work or eat. Finally, alarmed at the prospect of her death by starvation, they took her back to the Cayo Loco to live in freedom. From time to time over the years, the citizens of Cienfuegos tried again to "civilize" the Black Venus. But each time her passive protests forced them to return her to the key, where she reigned in solitude with the blue heron and the white dove her only subjects. The historian Pedro Modesto recalled that when he was a child, around 1876, an old Black woman, with hair like a huge white powder puff and naked except for a blue, red and white necklace, secretly entered his house. She refused clothing and was dressed only by physical force. She refused all the food offered her except for native products -yucca, bananas and sweet potatoes . The next morning she had disappeared, leaving the clothes behind. That was the last time she was seen. Today the Black Venus has become a legendary symbol against slavery. She represents affirmation of a free and natural being who refused to be colonized.

La Negra Venus fits this top floor bar; something about the freedom in the breeze and the view of kittens playing on nearby rooftops grounds me to the Cuba that the Spanish imagined, the frontier that brought workers and investors here in the early 19th century, before Cuba's bloody first war for independence in the 1860s and 1870s.
But it's been a long day and mom and I need to walk through our day and process it together.
The waiter from the other night is back and offers us a glass of red wine and a glass of white wine.
I like my reds darker, warmer than what I've been served here, and join my mom in a glass of cold white wine.  Before he can bring the glasses we both decide we are STARVING after a day of eggs, rice and water. As the waiter places our glasses my Mom asks him what is really good.  "Don't say spaghetti!" I add, much wiser from my experience Monday night.
Without pausing the waitor says “paella.”
We both shrink back and giggle. For years we’d been making fun of relatives who each ordered their own bowl of paella at this hotel; we had this bias that paella was a dish for a family, a dish to be shared and anyway, how good could it be? so neither of us ordered it.
We aren’t sure we are hungry enough for an entire paella, but whatever, we give him the green light. Today the universe has been good to us, why wouldn’t the lucky streak continue?
Mom takes  a sip of her cold white wine. I take a sip of mine and then bend over like I’ve been stabbed, “Oh my GOD mom did I really snatch my iPhone from that man? Did I make Americans look bad? Oh, I can’t believe I actually did that!!”
Mom takes another sip. She is careful with her words. “Well, you took care of it, didn’t you?”
I look at my phone, still with me, and laugh.
We look up at the stars and then get up from the table to lean over the rooftop edge and spy on the pedestrians walking down below.
A very young couple is making out on a bench on one side of the street; an old lady with a walking stick takes small, delicate steps down other side of the street.  Music pours out from the bar.
Where do you want to go tomorrow, Mom asks and I shrug and admit I’d like to go anywhere as long as it’s the two of us.
She nods her head and asks if I could tell that her cousin really seemed to need to talk to her about something big.  I said yes, yes I saw it but her day to talk to my Mom wasn’t tomorrow. Tomorrow is ours.
We go back to table to toast the idea that tomorrow is ours just as the bowl of paella with two spoons and two forks arrives.
I take a bite and find my mouth bursting with salty spices, lobster tail and ham. M
om takes a bite and stops eating in shock.  This paella isn’t just good, it’s great. It’s the best thing either of us has eaten during any of our visits to Cuba.
I take another bite. Mom follows suit. We sit quietly, shoveling it into our mouths, giggling at how awesome this moment is.
The waiter brings us more wine and in the small talk that ensues we both can’t believe we had spent the last years in Cuba so close to this treasure and not even knowing it was there.
After we finish our paella we head back to the room and Mom calls Dad to tell him we’ve arrived  safely and they have their usually lovey dovey talk.
Soon enough I’m in pajamas and Mom is in her bed reading.
I flip through the channels and find HBO in Spanish.  The newest episode of GIRLS comes on, but when the title flashes a creepy voices says “Chicas.” I try to watch it but the voices are wrong, the inflection is wrong, everything about speaking Spanish on top of English seems wrong.
I flip the channel to CNN and fall asleep.
on August 26, 2013