I have taught college-level American History classes for 20 years and there is a part of it that I struggle with, a part that I just don't think involves me. And yes, me.  When we look back in history it's more fun to look for ourselves, people we know, people we would have had dinner with or sent Christmas gifts to.  I have never gotten New England.

Maybe it's because I grew up in South Florida and didn't see snow or changing trees until I went to college, but  New England seemed like another America, one with a history that didn't involve familiar things like jambalaya or Castro. 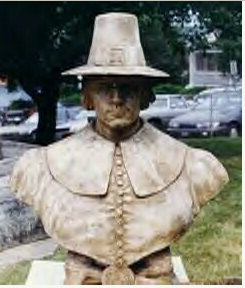 Thanks to Ancestry.com I have to change how I see this country because I just found out my Dad's people hung out in -- and played a prominent role in -- colonial New England.

Meet Captain James Avery, my dad's 9th great-grandfather. Born in 1620 in Salibury England, he arrived during the Great Migration in 1647 and died in 1700.

Already as historian I know this first generation of New Englanders, those that survived the early years, thrived in the climate that was much milder than England's.

Unlike in areas of colonial Chesapeake where settlers rarely lived past 35,  colonial New England saw the emergence of a generation of tough grandparent-patriarchs.

Before I can think another thought or try to figure out why this man is a Captain and who he fought, I am again struck with having a New England ancestor.

The fact that he was an important figure in New England means he couldn't have been Catholic.  Catholics weren't welcome in New England and would never have become leadership; second, if he were Catholic he would have gone to a different colony -- Maryland most likely, followed closely by Pennsylvania and New York.

I thought I came from generations of French and Irish and Italian and Spanish Catholics, and that my Dad (and my brother and myself...) are the first to challenge the church and its teachings.

I'm relieved - and honored - to see in fact that spirit of free thinking is in our blood.

James Avery couldn't have been too much of a free spirit though; he had to have been a practicing "visible saint" in his Puritan congregationalist faith in order to be a full member of colonial New England where there was very little  social or political separation between church and state.

Captain James Avery is something to brag about if you are drawn to brag about ancestors who stopped the a crucial coordinated attack by natives at the time New England colonies were filling with tens of thousands of immigrant families planting farms and churches.

Here's the thing. King Phillip was a famous Spanish royal bad-ass who had been married to Queen Mary of England, and did the happy dance that a decendant of Isabella and Ferdinand was ruling of England.

He was part of bringing Catholicism back to England, which was then repelled when Queen Mary died and Queen Elizabeth took over and Phillip went back to Spain.

So King Phillip's War must have been a war that involved Spain, right?

In New England there was a native leader named Metacomet that went by "King Phillip" and actually let people call him that.   I wonder if someone taunted him with it, made it up as a slur, a joke, a tease, then I don't wonder because no New Englander was a friend to Catholic Spanish king.

This "King Phillip" who was neither Spanish nor Catholic nor a friend of New England, but his merciless attacks on several settlements over the course of a year ultimately lead to his own defeat. I bet the colonists knew they'd win and this King Phillip would retreat just like the other King Phillip.

This war is important for more than who won (we did!) and who lost (they did!) because it is a critical moment in American history where the colonists have no hope at all of a British army coming to their aid. On their own, from among their already strained numbers, New England colonists come together and fight their first genuine "American War."

Captain Avery's descendants would go on to found Groton CT and stay there for a generation until Avery's great-great-grandaughter Sara Jane moved to the great frontier of Kentucky.

Email ThisBlogThis!Share to TwitterShare to FacebookShare to Pinterest
Labels: Adventures (Big and Small), Perpetually Cursed with a HUGE Imagination, Pieces of My Heart Diced Up and Folded into a Story, Professor Diaries
Newer Post Older Post Home