Another Statue of Liberty in Cuba. I Can't Make this Up.

I brazenly and maybe after a few too many thimble sized glasses of Cuban red wine told my cousins we would come back to Cuba in October.

My mom and I  meant to be there this week, right now. We  tried to make it work but a few things weren't quite right and we postponed   We decided to go in November, but there were no seats left on the flights we needed. So now I know I won't see Cuba again this year, and I have to let that be enough.

After hearing so many times from my Abuela (when she could tell me) and my Abuelo (still, from his chair in between episodes of Hardcore Pawn and Cops)  I needed to see Cuba to understand, I finally saw it. I'm starting to understand.  It should be enough to say that I went to Cuba, and then move on to the next thing on my bucket list.

I fell in love with Cuba; it told me stories and made me want to write. It filled my imagination and my heart and changed how I saw everything.

After the honeymoon ended and the chapters started to trail off and I sat here quiet alone (and unestranged) (for months) thinking if I could just see Cuba again I would be able to finish the book, I'd have something to really say.

But then yesterday I was going through my iPhone yesterday looking for a new screen for Facebook and I slowed down in my Cuba pictures.

There, there is the Parthenon.  In Cuba. Amazing.

There, me and my Mom at this cemetery, and then the other, placing flowers.

There, me and Jose Marti. Amazing.

And then come the pictures I took while Machete was driving us.

And there right after the picture of the big tree and the other picture of an old guy leering at a woman walking by was a clear shot of a statue I hadn't noticed before.

I pinch and zoom and squint my eyes.

It can't be. I already found Lady Liberty poised at ground level holding the laws of the Cuban Republic (1902).   It was enough to have found the Statue of Liberty in Cuba. Really.

Now I'm sure it's her, I'm sure its her regal neck her thrown back shoulders I see in this photo shot down the Prado.

She has one arm raised. She is wearing a toga.  It doesn't have to be her.

It could be Our Lady of Sorority Parties.

It could be a forgotten then remembered goddess poised with one arm raised commanding sugar to grow and money to flow.

It's Lady Liberty planted in stone in Cuba.  You'd agree if you saw her.

I send the image to my Mom to identify.

She isn't sure who it is and sends it to cousins to friends.

They come back with "Patria." Lovely. 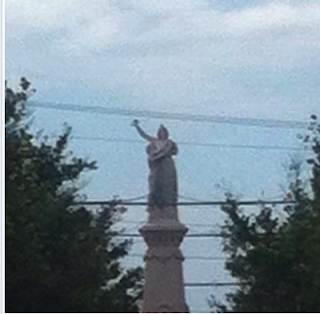