Permelia Pentacost and the Other Boleyn Sister

As summer winds down I face what I need to face, taking care of tasks big and small. This is 'something" to do, but it isn't everything, it isn't nearly enough, I need more, I have to be engaged, I have to have something to think about.

That's why I love ancestry.com.

Just a few hints give me the names and more hints and minutes later I'm knee deep in a boom of relatives on my father's side who settled along the German Coast Louisiana in the early 1600.

Because this is NOT a video game I don't have to plant crops or build hospitals for them.

That would be cool, but this is easier. No surprise hurricanes will come through; in fact as I go through who arrives where, who the meet and marry, and how long families stay put, I can see the forces pushing and pulling them from Europe to America and then to smaller communties within it.

Through a twisted hint from the back of a century old family photo I find the curious name Permelia Pentacost.  I wonder if the father was a revivalist preacher, if he changed his name to escape something.

Later (hours? days? have I slept?) I find a wife who has 5 children in Tennessee and then left them all behind -- or maybe she brought a daughter? but not her husband because  she was married at Nauvoo right on the evening of the famous Mormon slaughter, survived the slaughter and was buried in Utah thirty years later.


Every bit of this research is delicious, it tastes so good I have to shout out to my kids.

Zoe! Another ancestor who fought in the Civil War! This one on the.... Union.  Don't forget last night the one we found who fought for Alabama. We definitely fought on both sides, but we have to see if our ancestors fought each other.

She waves a feeble "thanks" at me and leaves me to my work.  As a history professor, researching history is work. It absolutely has to be, it has to count, so yes. Mommy is working on her iPad - iPhone - Mac (all three at the same time) stringing invisible people into a web of a family.

I chirp at no one in particular "oh my GRANOLA these women had 14 kids each?!" and "can you believe this name? Nimrod Stillwell? Why? WHY?"

Zoe sighs and Zack ignores me.

Minutes later I have to talk again. I have to share my excitement

Zack! My ancestors were part of the war of 1812! and the Revolutionary War! I can be a Daughter of the American Revolution.  Isn't this awesome?

Awesome for you, he says, still unconvinced that what I'm doing is as satisfying as MarioKart.


They stare at the TV and ask what we are going to do, next, after Mommy stops compulsively mining for data, looking for gold.

I don't answer the children and instead follow every research link, critically analyzing each bit of data before I accept it to merge in files (how could this mother be born after their child? How could this man be his own son's mother? Huh?)

Then I found some true treasure.

Behold, the OTHER Boleyn Sister, is my daughter's 15th great-grandmother.

But since the kids don't seem too excited, I'll keep it to you, to me and let it unfold itself into a Forrest Gump romp through history. 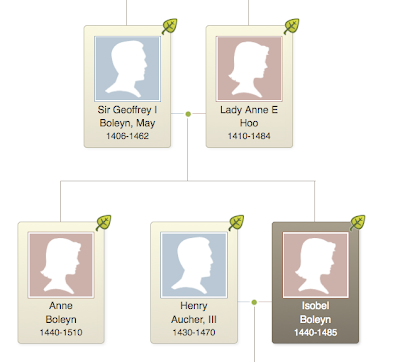