I can't tell you when but I gave up on July, gave the month back to God and the universe and said here this doesn't fit. It's too tight, too hot, I'm done with it.

Apparently July cannot be given back and there is no fast forward button to get through it smoothly. Just as the end of July was in sight and I could almost see my new semester around the corner, the universe sent me a horrendous headache, the big one, the one that brought freakish numbness on one side of my face that spread to my arm -- my writing arm.

I slipped myself to the hospital and got enough attention to win the battle and get a good guess at what kind a war I might be fighting.

They would have had me stay longer but I couldn't, I just couldn't. I had too many things to do, I told them and I told myself as I signed the forms declining admission.  I had too much I needed to do before the end of July to hang out and watch the Olympics in a peaceful quiet private room, so I took myself out of there and back to Camp Mommy where I finally unpacked all the half-full tote bags from the trip we returned from several days before.

I did four loads of laundry. I swept, I mopped, I cooked breakfast and lunch for the kids and then moved furniture and keep cleaning. I called about an error on a bill (something I am loathe to do, I would do anything before that);  I filled out a form, I mailed a check and I took the kids to Walmart to buy more crayons, more glue, more things to keep them busy.

With dinner in the oven and all the hard work done I finally had time to call my Mom for the first time since the headache started.

She's with Abuelo so it's a quick conversation.

I know I have to share her but  I  I keep her on the phone to brag in listing detail about how many specific and tedious things I accomplished on this last day of July so I would have a perfectly wonderful fresh start in August.  I added, Hooray! Happy last day of July!

My Mom laughed at me.

Today isn't the last day, she tells me, and I don't want to believe her but of course she's right.

The Other Lady, There All Along

My son commented the other day on my profile picture.

He hates it. Who is that crazy man I'm posing next to? Looks creepy to him.

It's me and Jose Marti, I remind him.

I'm sure I've told them more Cuban  history than most children can tolerate.

Every bit of it seems to fall out my son's ears like water through a colander.

I remind him that I took a picture with a torso-sized Jose Marti statue while I was in Cuba, a trip that now seems to have occurred 5 years ago, not three months ago.

What's so great about Jose Marti, he asks, and from experience I'm guessing I have ten seconds to hook him.

Jose Marti  loved Cuba but bad things were going on, so he left and came to the US where he  travelled up and down the US organizing Cubans and inspiring them to fight to liberate their country from being a Spanish colony.

Some people think he's a great Cuban, but I also think he's an amazing American, a warrior for justice and freedom.

I lost my son at that point, and let the story go.

I'm sure if I would have had some Andrew Jackson-esque battles to re-enact for him our conversation would have gone longer. But he left me there, sitting with Jose Marti on my mind.

So I started scrolling through my iPhone looking back at the pictures from my trip.  It seemed I took so many pictures, way too many pictures, but now they don't seem to be enough.

I scroll back a little further in my phone pictures and see the pictures of bags in my office from students to Veterans.

Then there are pictures of Zoe and her science project and then some other pictures from when tis iPhone used to be my Dad's phone.

Lots of pictures of hibiscus.

Smiling people, some I recognize, some I don't.

My cousin, the cute physician, smiles brightly and warmly for my father. I didn't think I had a picture of her, and it's good to see her again. I keep going through, recognizing face after face, place after place. This is fun. In my Dad's Cuba, there are more pictures of people doing things, standing by things.   Less architecture, more group pictures, posed.

And then I get to a picture I don't recognize. At all.

Its from the one place I didn't have time to visit other than driving through.

Plaza Marti, named for my favorite guy.  There's a picture of my Mom standing next to it.

Only, I can't stop looking because I can't be seeing what I'm seeing.

On the pedestal, raised up about a story high, is Jose Marti.

If you google his statue in Cienfuegos, that's what you'll see. Jose Marti, raised up.

In an artistically symbolic way this makes sense because Marti was killed before setting foot back on Cuban soil for the revolution he helped organize and launch.  His leadership was mostly moral, spiritual, inspirational. As a soldier he lasted mere hours but his words linger for centuries.

But on the ground, standing there guarding him, as large and wonderful as him, is a lovely lady I recognized immediately.
No one told me I would find her sitting so boldly in Cuba, but  I forgive them. Maybe they didn't recognize her themselves, maybe they've been given an intentional blind spot in their history and it keeps perpetuating in their stories.
But seeing this there is no ignoring the truth.
There she was, in her robes, I knew her immediately.
There, in Cienfuegos, Cuba, was Lady Liberty, symbol of the Republic, symbol of freedom, justice and rule by law.
The Cuban Republic was born in 1902, only about 15 years after the Statue of Liberty arrived in New York City.   This image was no accident; its a permanent reminder of a friendly neighbor who is permanently tied to Cuba, her history and future.
She's been there all along, standing at the base of his statue, clearly representing the depth of US and Cuban ties and sympathies for generations, written in stone. 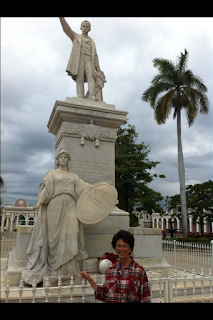 Email ThisBlogThis!Share to TwitterShare to FacebookShare to Pinterest
Labels: Adventures (Big and Small), Cubanitas, No Island is an Island, Tales of Being Sneaky and Getting Away With It, War Stories 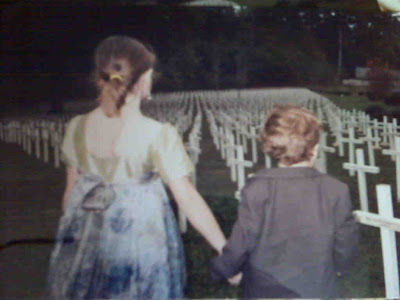 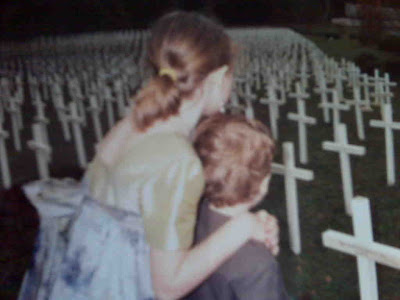 (Zoe and Zack at a memorial for US casualties of the Iraq and Afghanistan wars)
Email ThisBlogThis!Share to TwitterShare to FacebookShare to Pinterest
Labels: Dancing Awkwardly through Motherhood, War Stories

Thank you to to the following students who contributed generously to the Veterans Village 4th of July food drive:


*let me know if I missed anyone! 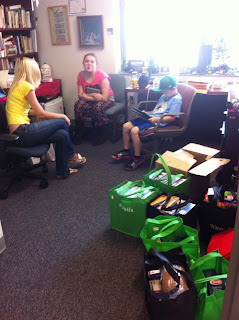 Here are about half the bags -- and my kids, and Denise (hi Denise!) --
while I was taking these down to my car, my office filled back up with more bags! 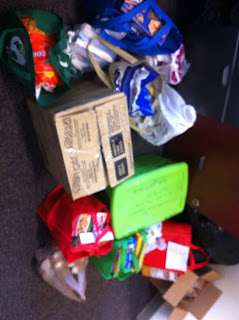 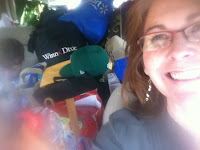 When I finally filled the car up to drive to Veterans Village,
my poor kids were surrounded by bags of food. See Zack?
It was awesome*
Email ThisBlogThis!Share to TwitterShare to FacebookShare to Pinterest
Labels: Professor Diaries, War Stories
Newer Posts Older Posts Home
Subscribe to: Posts (Atom)