A Castro By Any Other Name...

Before every unit I give a pretest. 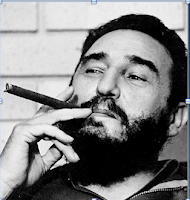 This week, as part of the pretest, I put a picture this of Fidel Castro up and asked, "Who is this?"

In one class, two guys in the front blurted the answer out (in a "duh" tone; I think they thought I was really wondering who was in the picture!), so that class found out the answer quickly.

Out of my other two classes, about 50% correctly identified the man in the picture as Fidel Castro (not all spelled it the same way -  there were a few "Kastro" and some "Feedels"  and a "Phedel"  that I decided to count as sorta correct).